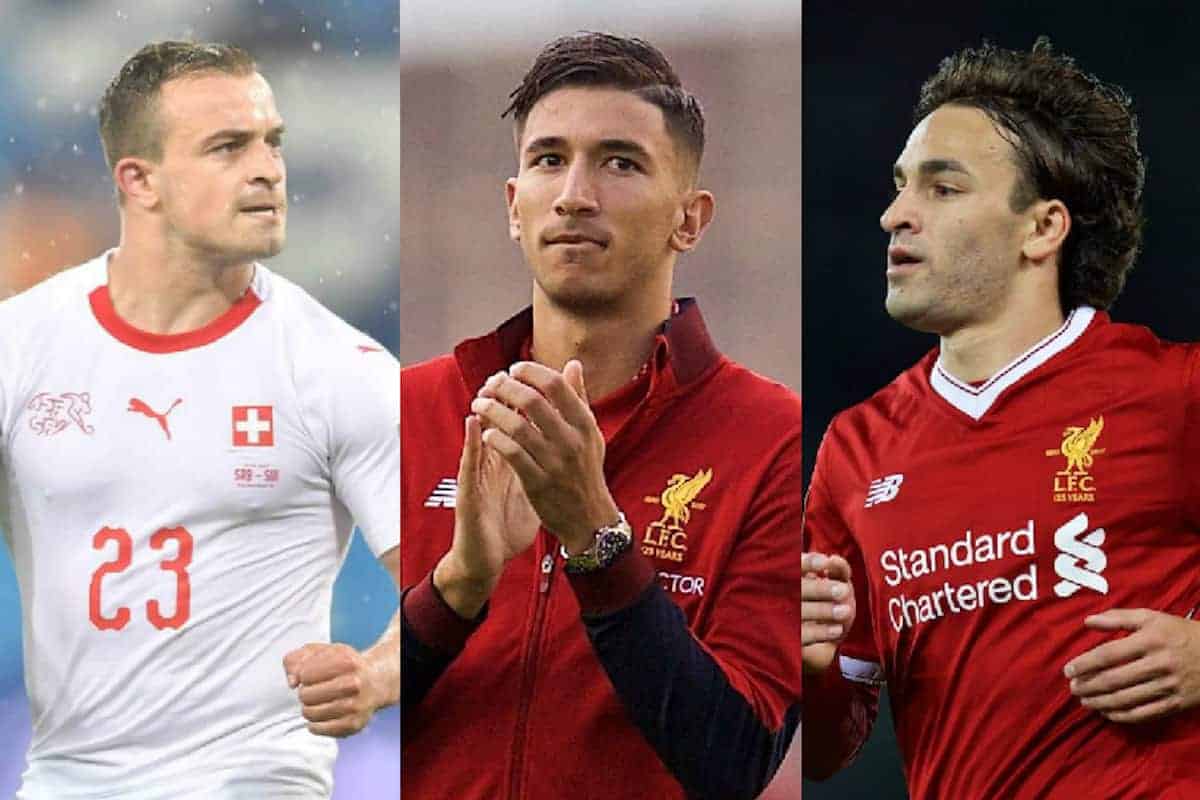 We round up the latest Liverpool FC news and transfer rumours on Wednesday, ahead of England and Croatia’s huge World Cup semi-final.

Shaqiri To Join Tour of US? On Tuesday night, reports emerged that Liverpool had opened talks with Stoke City for Xherdan Shaqiri.

The potential transfer has been mooted for a while now, with Jurgen Klopp keen to add depth in wide attacking areas for next season.

The Daily Mail‘s Dominic King believes Liverpool will try to wrap up a £12 million deal before they depart for their pre-season tour of America on July 21.

Shaqiri is set to return to Stoke training on Monday after his World Cup excursions, and a deal can therefore be expected to be announced in the near future.

Grujic To Return To Cardiff

Marko Grujic spent the second half of last season on loan at Cardiff City, helping Neil Warnock’s side seal promotion to the Premier League.

With first-team opportunities at Liverpool set to be hard to come by in 2018/19, it looks as though the 22-year-old is returning to Wales.

Football Insider reports that the Reds and Cardiff “have agreed a deal in principle” for the Serb, who made a total of 14 appearances for the Bluebirds last season, scoring once.

You have to wonder whether Grujic has a long-term future at Anfield but a year in the Premier League will certainly be good to see.

Ante Rebic has shone for Croatia at the World Cup, helping them reach Wednesday’s semi-final against England.

It was his expert volley that set the Croatians on their way to a famous 3-0 win over Argentina in the group stage.

According to Sport Bild, the 24-year-old has caught the eye of a host of top clubs, with Liverpool one of those in the mix for his signature.

The Eintracht Frankfurt man is believed to favour a move to Bayern Munich, though. Other reported suitors are Man United, Tottenham and Arsenal.

Probably nothing in this link at all. England and Croatia face-off in the second World Cup semi-final on Wednesday, with Henderson and Lovren both to start.

The Liverpool skipper has been full of praise for his club teammate, lauding his all-around quality as a centre-back despite flack often coming his way.

“He had his fair share of criticism but he’s done so well over the last six months, especially after the start of the season, he bounced back so well,” Henderson told reporters.

“He’s got everything: he’s aggressive, good in the air, good on the ball, a real leader as well, always talking. I’m so pleased for him, he’s a great person, great character but hopefully this journey ends for him.”

Who will come out on top in Moscow and move on to the final against France on Sunday?

Markovic Not Finding Many Suitors

There is no shame in forgetting that Lazar Markovic is still a Liverpool player, having not represented the Reds competitively since May 2015.

The Serb will never play for the Reds again, but Turkish Football claim he is struggling to find a new permanent club, despite being offered to Galatasaray.

Goal‘s Neil Jones does believe Fenerbahce and Anderlecht are interested in signing him, however, having played for both on loan in the past.

What a wasted talent. Much of Liverpool’s 3-2 win over Tranmere Rovers on Tuesday centred around Loris Karius‘ latest mistake, but Sheyi Ojo was a bright spark.

The young wide man scored the Reds’ second goal with a lovely finish and was a constant threat with his pace and power.

Speaking to Liverpoolfc.com, Ojo says he hopes he did enough to impress Klopp, as he looks to remain at Anfield this summer:

“I was on the right wing and the manager always talks about being aggressive, being direct.

“It was a good one-v-one opportunity and I was trying to get some space and managed to get the shot off and score the goal.

“Every time I’m on the pitch I just want to play free and attack as much as I can and hopefully score and assist.

“I managed to do that today and it was really good but I think the most important thing is to just keep improving and that’s what I’ll look to do in the next couple of games.”