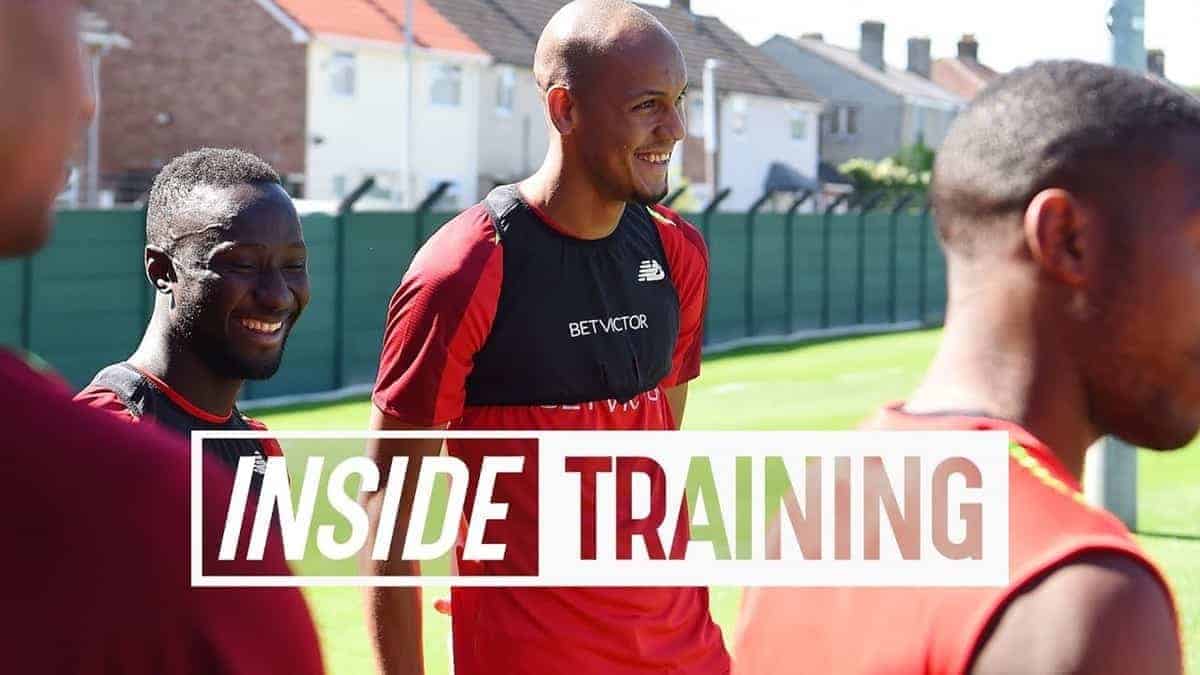 Liverpool’s preparations for the 2018/19 campaign are underway, with Jurgen Klopp and his backroom staff putting the squad through their paces.

The majority of the Reds’ first team returned to Melwood on Monday morning, though 12 players were absent due to World Cup involvement, extended breaks and injury.

After spending the first day back undergoing fitness and endurance assessments, the squad began ball work again under the watchful eye of the returning Pepijn Lijnders.

Lijnders looks to have taken up a more focal role after spending five months in charge of NEC Nijmegen in his native Netherlands, likely filling in for the missing Zeljko Buvac.

Naby Keita and Fabinho have been a key presence during the opening week back in West Derby, with the pair joining their new team-mates after big-money moves from RB Leipzig and Monaco.

Meanwhile, Loris Karius and Danny Ward worked with goalkeeping coach John Achterberg, with the duo currently set to serve as No. 1 and No. 2 this season.

Though Karius’ involvement could prove controversial following his disastrous showing in the Champions League final, a lack of viable replacements will likely see Klopp keep faith in his compatriot.

The manager took a backseat during training, preferring to oversee progress from a distance, and it is encouraging to see Lijnders take charge of sessions.

On the first day of pre-season, James Milner provided a welcome reminder of his remarkable fitness, outlasting the likes of Keita, Adam Lallana and Danny Ings in the outdoor lactate test.

Milner’s role could be diminished following the arrivals of both Keita and Fabinho, but his vitality is clear, and he will still be crucial as the campaign progresses.

Despite the disappointment suffered at the end of last term, Klopp was in high spirits as he welcomed his squad back, with big hugs for his new signings, plus the lesser-spotted Allan Rodrigues.

Allan is currently back at Melwood after shoulder surgery cut short his loan spell with Apollon Limassol, but will head out again as he is yet to secure a work permit.

The likes of Sheyi Ojo, Harry Wilson and Divock Origi have all set their sights on a first-team role after spending last season away from Anfield, however.

Meanwhile, Andy Robertson extolled the virtues of a full pre-season under Klopp, having joined midway through last summer in a bargain £8 million deal with Hull City.