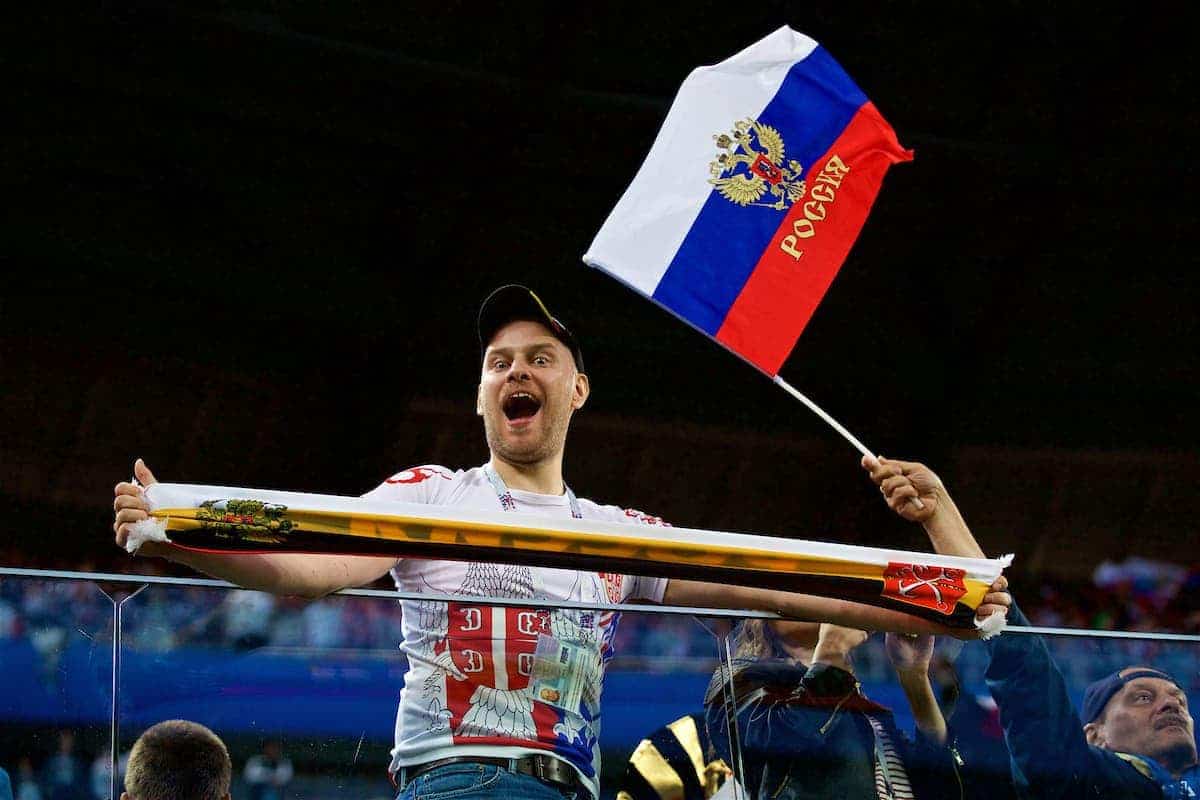 This is Anfield’s James Nalton visited Russia for the World Cup to see what really goes on in a country often viewed in a negative light by the Western media.

There are scare stories before every World Cup, but when it comes to Russia the scaremongering rhetoric had been building for a long time. Russophobia is an acknowledged phenomenon, and the idea of Russia as the bad guy is ingrained in Western culture.

As the country prepared to host football’s biggest party, this negativity was ramped up in certain quarters.

The biggest problem is that there is never any balance when it comes to the portrayal of Russia in much of the media. The overall truth is usually somewhere between the scaremongering and the pro-Russia propaganda, as it is with any country, including England and the US.

Initiatives such as CSKA Fans Against Racism approach the country’s – and particularly their own club’s – troubles with honesty, but appeal for fairness.

They acknowledge that the problems will only begin to be addressed when tackled head on in the country itself, but also appeal to the Western media to stop sensationalising the negatives.

Any positive aspects of Russian football culture — such as this organisation itself which has the support of the club and many ‘ultras’ — are brushed under the carpet in the small amount of coverage it gets, and it’s not dissimilar to the way English football fans were attacked by the media in the 1980s. This Moscow based anti-racism organisation believes that the actions of a minority are exaggerated.

“We do have problems with our fans, but they will never represent the absolute majority of CSKA supporters who strongly oppose any racist or fascist ideas,” they told Russian Football News.

The highlighting of negatives is a political tool used by the West to hide its own problems, especially those with racism, and paint their own politicians in a better light.

The BBC themselves had released their own anti-Russian propaganda, warning the nation about Russian hooligans and racism in their documentary, “Russia’s Hooligan Army”.

So far the only incidents of racism at the World Cup have come not from the Russians, but from one of the BBC’s own employees — Alan Sugar. CSKA Against Racism commented on the BBC documentary and appealed to fans from all corners.

“Our cry from the depths is not about criticising BBC but rather an invitation for mutual cooperation,” they told Futbolgrad.

“This is our call to all media outlets, fans, international organisations that refuse to accept the growing wall of hatred, and believe in uniting power of football to come together and show that we all speak universal language of football.”

England fans themselves are regularly patronised by their own media, and there were plenty of opportunities for this to be combined with Russophobia ahead of the tournament.

Mark Roberts, the National Police Chiefs’ Council football policing lead revealed to the Telegraph that “fans should expect to serve time in a Russian prison if they engage in the kind of rioting which almost got both countries kicked out of last year’s Euros.”

Much of Roberts’ warnings were reasonably sensible and in normal circumstances would be considered common sense, even if they were a continuation of the kind of language which treats all football fans like idiots.

It shouldn’t come as a surprise that rioting will be punished by the authorities, but the way the information was presented was misleading.

Roberts’ further advice to fans to respect national monuments and memorials was turned into an article with the headline “Don’t take England flags to Russia World Cup, police tell fans.”

“We wouldn’t expect people to come across to this country, get drunk and drape flags on the Cenotaph so we need to extend the same courtesy when we go abroad and treat places with due reverence,” said Roberts.

“People need to be really careful with flags. It can come across as almost imperialistic. We really urge some caution about people putting flags out and waving them about in public.”

Again some common sense with a slightly patronising tone, and perhaps some unnecessary measures regarding the mere waving of flags, but it was translated into something more sensational by the headline writers. There was a big police presence in the Russian cities, especially on match days, but this was reassuring and helpful, rather than imposing and intimidating.

Police mixed with World Cup volunteers who were dotted around the cities at helpful locations, all the way from the airports and public transport links to the stadium gates.

Even the Russian people who obviously weren’t too interested in the football were still happy to help those who were.

Free transport was provided on match days, with the volunteers doing a good job at designated bus stops for extra buses on top of the usual services.

The buses themselves were quaint and some looked like they’d been in operation since the Soviet days, but the key phrase here is “in operation.”

Despite their old-fashioned appearance these buses (and trains) worked, were regular, and ran late into the night, which is more than can be said for the current shambles of a public transport system in the UK.

It cost the equivalent of 24p for the bus into town in Volgograd, and there were so many routes that you could travel pretty much anywhere on them. If Vladimir Putin has gone out of his way to make this tournament a success, then the people of Russia have gone even further.

While politicians squabble, the people on ground level are helping this World Cup be an enjoyable success.

There are often language barriers to overcome at World Cups, especially at the most recent tournaments in Brazil and Russia, but on both occasions the obstacle was an easy one to overcome.

The aforementioned volunteers weren’t always English speaking, and you’d imagine few of those travelling to the country were experts in Russian, but Google Translate was handy to communicate the things which can’t be said with a few hand gestures.

Even in the supermarkets there were assistants wearing t-shirts indicating that the person wearing it spoke English, and could help to translate the ?Cyrillic? on the various products. Though, once familiar with the Russian alphabet, it’s surprisingly easy to translate many of the words and phrases. Free WiFi in the stadiums, the impressive Fan Fests, and the airports was also a big help when it came to anything from translation to transportation.

Phone companies were also providing sim cards with mobile data for travellers for between £5 and £10 for the duration of the tournament. The investment in transport will benefit these areas even after the World Cup has left town, and unlike Brazil 2014 it appears that most of the promises were kept in this regard and the locals have something to keep.

These are cities which many would not have visited were it not for the World Cup, but they are now places to which they’ll want to return. Maybe even to catch a game of club football.

The World Cup locations are now home to some of the most impressive stadiums in world football, and it will be interesting to keep an eye on how they are used after the tournament.

Each stadium, bar the Luzhniki Arena which is to Russia as Wembley is to England, will host club football next season, with some of the arenas destined for lower league sides having some of their seats removed.

The only slightly controversial move is the relocation of Dinamo St Petersburg to Sochi where football has struggled to catch on. The resources from the struggling St Petersburg side will be relocated to Adler, just south of Sochi where the Fisht Stadium is located, and they will hope that the team can build on the football fever brought by the World Cup. Russia has always had an interesting football league, which is one of a number of competitions around the world, and especially in Europe, which come close to breaking into the top five.

England, Spain, Italy, France, and Germany are considered the best, but the investment in football facilities a World Cup brings could see the Russian league improve.

The familiarity football fans now have with these city names and stadia could see more adopt a Russian club, and therefore see slightly more coverage across social media and the media in general during the next season.

Maybe this will see a few more of the positive stories come to light, rather than just the high profile negative ones.