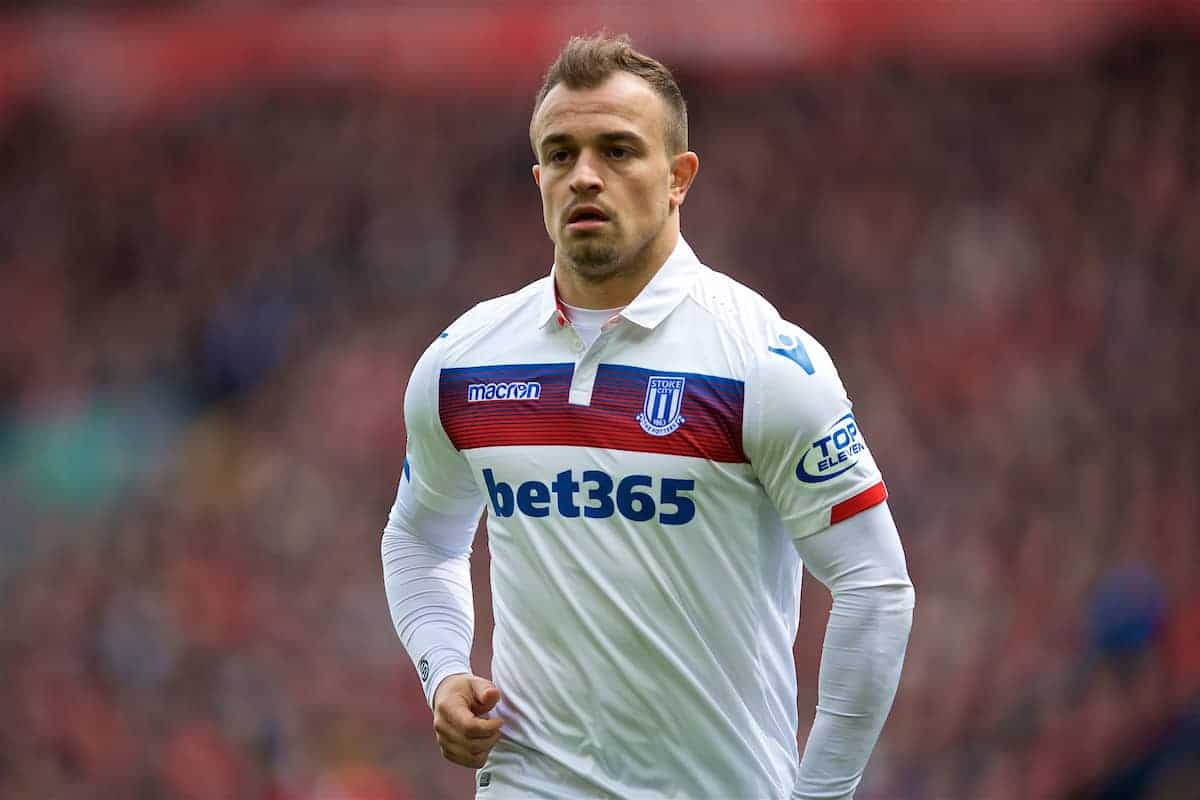 Liverpool target Xherdan Shaqiri has revealed his next move will become clear “soon,” after Switzerland’s exit from the World Cup on Tuesday.

Shaqiri suffered heartbreak in Russia as the Swiss fell to a 1-0 defeat to Sweden in the last 16, with Emil Forsberg’s goal setting up a quarter-final against England.

The 26-year-old scored one and assisted one in four appearances at the World Cup, playing a crucial role in his side’s progress from Group E.

But he now heads off on a short break ahead of the new campaign, with his future unclear after Stoke City‘s relegation from the Premier League.

Shaqiri has previously stressed he is looking to remain in the English top flight, with a release clause in his contract ensuring he is available for around £13.5 million.

And speaking after Switzerland’s defeat in St Petersburg he reiterated this stance, and suggested a move will be revealed in the near future.

“At the moment, I can’t say anything. You are going to hear soon on my future,” he said.

“I was not thinking about this because I was just focused on my national team and wanted to make a good tournament for my team and my nation.

“It’s pretty normal to be aware of clubs being interested.

“I don’t know, it’s not dependant on me sometimes. Of course, I would like to play on the biggest stage in football. Everybody knows that.

“I hope I can stay in the Premier League. I hope so, you never know with football. I don’t rule out anything.” Shaqiri would not arrive as Liverpool’s primary addition in the attacking third, with the former Bayern Munich winger instead poised to supplement Jurgen Klopp‘s first-choice unit.

A move for Lyon attacking midfielder Nabil Fekir, the Reds’ No. 1 target, broke down last month, but there remain hopes that a deal will be revived.

If Fekir and Shaqiri both join, the former is set for a key role while the latter will provide cover for the likes of Sadio Mane and Mohamed Salah.

The prospect of Liverpool signing Shaqiri has not been universally praised, with his perceived lack of work rate and suspect attitude serving as red flags for supporters.

But with the club’s recruitment proving near-flawless in recent seasons, there is clearly potential in the forward, who was Stoke’s top goalscorer (eight) and assist-maker (seven) in 2017/18.

Gent youngster Moses Simon has also been touted as a possible signing for the Reds, but speculation over the Nigerian has cooled of late.