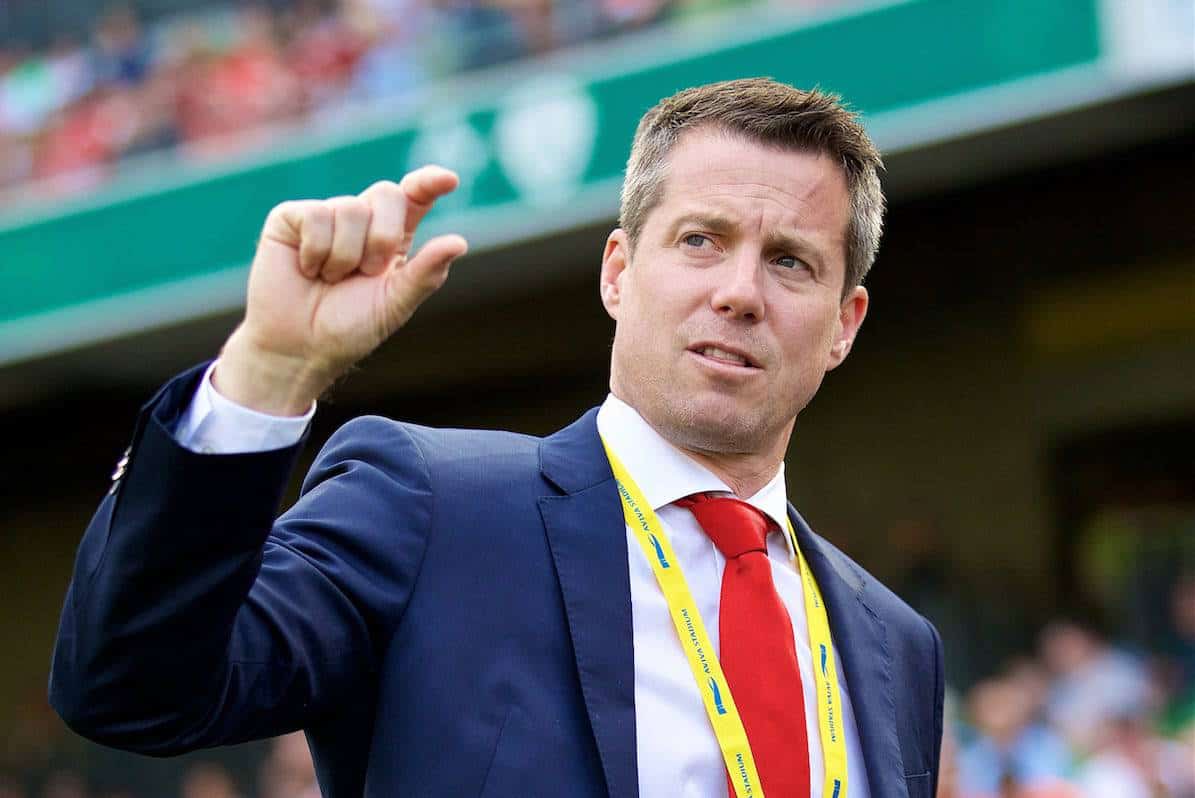 Liverpool’s managing director Billy Hogan has spoken about the commercial work the club undertakes and how that underpins on-pitch efforts for success.

While many fans love to see the latest big new arrival go on to make a mark on the pitch after a big-money transfer, a lot of work has to go into the club to make that happen.

And not just the scouting and football side, but the financial side—and that’s where Hogan, former chief commercial officer and now managing director, comes in.

Working for the Reds as part of FSG’s big overhaul of the non-sporting staff, Hogan has been in place for six years across the two roles and has spoken about the huge changes seen at Liverpool in an interview with the Liverpool Echo.

With the Reds now looking to reestablish themselves as a major force in the Premier League and beyond, it has taken a lot of off-field work to allow the club to be capable of competing at this level.

And Hogan says commercial growth and a long-term strategy has been vital to that.

“We have moved the club forward quite a bit in that time. Clearly, from a commercial standpoint, which has been my area of responsibility, that’s grown significantly.

“But more importantly and I think what everyone is most proud of is the strategy we’ve had since FSG took ownership – how we built the club in a sustainable way over the long-term to be successful on the pitch. That’s ultimately what this is all about – everyone here wants to win.

“I think we’re starting to see the delivery of that strategy now in terms of the reinvestment on the pitch and the success we’re seeing. We’ve also invested heavily off the pitch with the Main Stand, the new superstore at Anfield and the new training ground which is just about to start.

“Across the whole team of staff off the pitch there’s a huge desire to return the club to where we believe it belongs at the top of world football. We can’t do that by kicking a ball but we can do that by helping to drive the business forward.

“This is about making our fans proud of the club. Sitting here today, the club is in a tremendously positive place. The football is terrific, the team is playing great and we’re all excited about the future.

“If you go back to when FSG first started looking at Liverpool as an opportunity, people were referring to the club as a sleeping giant. I think that’s something that’s been proven to be true.”

Hogan also spoke of “aggressive plans” to continue the commercial growth of the club, which includes partnerships with other organisations to reinvest income back into the sporting side.

The Reds recently signed one such deal with Levi’s, while the Echo suggest the Standard Chartered deal is worth £40 million a year to Liverpool.

It’s not just the SC name and logo on first-team shirts now, though, as a sleeve sponsor was allowed and introduced last season for the first time.

Western Union pay £5 million a year for the right to be displayed on the red shirt and Hogan has spoken about the process of identifying which businesses are right to associate with the club.

“The sleeve position was available because that was something introduced at league level and we were an early adopter of it.

“Western Union has been a terrific partner for us, a truly global brand. It definitely resonates both in local and international markets.

“We’ve been working with BetVictor for a bit longer as the training kit partner. That’s been great for them in terms of the growth of their business and a great platform for us in terms of them helping to promote and market the club.

“Typically, there’s a long cycle in terms of identifying a partner. It needs to work for both parties. It’s about finding the right potential partner and working out what might work between the two of us and how we craft something.

“Olly Dale is our commercial director, responsible for the partnerships business and he does a terrific job. He’s got a team who work day and night to find those partners.”

Social media growth, the club’s office base in London and how Jurgen Klopp fits into the club ethos at boardroom level are also all discussed.

“He completely gets that what we’re trying to do from the commercial side is generate revenues that we invest back into the football side,” Hogan said about the German manager.

“He also recognises that a huge element is how we engage with the fanbase. When we played Torino in the final friendly, we tried to bring some of the things we do on tour to Anfield.

“That was something Jurgen was adamant about. We want to create a dynamic where we’re all in this together.”

The entire interview, viewable here, is a fascinating insight into the work which goes on behind the scenes and enables the club to challenge for big-name signings.

Work continues both on and off the pitch to put Liverpool back among the giants of the football world, and the evidence of the last 12 months is that they are firmly on the right path.

A Champions League final, world record signings, a new training complex on the way and the hope of much more success to come this season all mean it’s an exciting time to be a Liverpool fan.