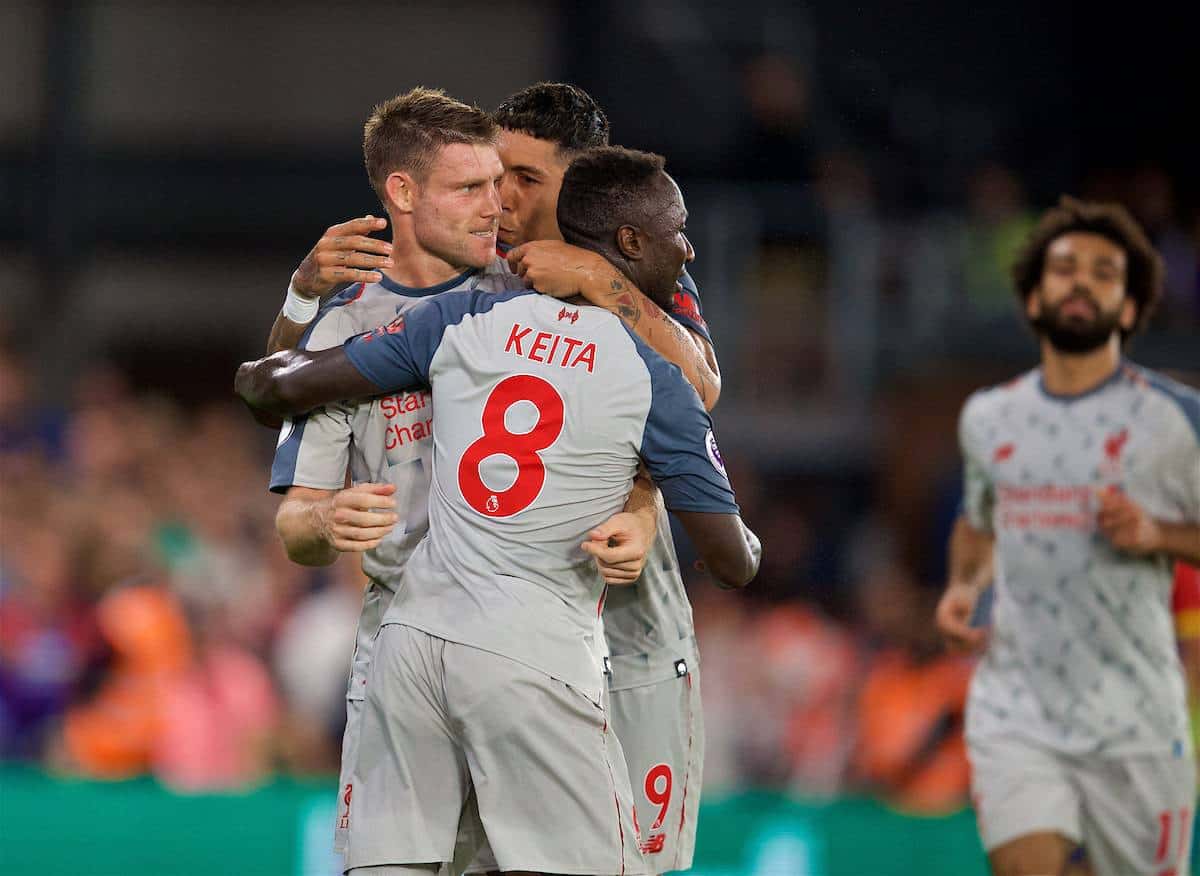 Liverpool showed a champion’s mentality at Crystal Palace on Monday night, grinding their way to a hard-fought 2-0 win.

After cruising past West Ham in their Premier League opener, the Reds were given a far sterner test at an atmospheric Selhurst Park.

Jurgen Klopp‘s side dominated the first half without creating a huge amount, but James Milner‘s penalty on the stroke of half-time gave them a precious lead.

Aaron Wan-Bissaka was sent off for hauling down Mohamed Salah after the break, before Liverpool survived a late onslaught by the 10-man hosts.

Sadio Mane got his third of the season in stoppage time, though, rounding Wayne Hennessey before finishing coolly following a slick break.

It was a huge win for Klopp’s men—here is how supporters reacted to the game across social media and our forums.

Fans were left joyous about the character and professionalism shown…

That’s the kind of game in which #LFC would have conceded late on in recent past. Alisson/Virgil excellent. Professional display. 1st time Klopp has won his first 2 games of the season as #LFC manager pic.twitter.com/bZF5qXy6Pz

Big statement that. Gritty win at a seriously tough ground to go to. Get in!

“Thoroughly professional performance games like this win you titles.”

Absolutely love those gritty away wins, would have dropped points today in recent seasons.

Palace will have a good season, impressive from them today.

“Phew, I can breath again.

“Quality result. Palace away on a Monday night is one of the big banana skins of the season, glad we’ve got that one in the bank early.”

That's #LFC's fifth straight away win at Selhurst Park in all competitions now. Wasn't pretty at times and it was exceptionally tight in some areas, but 0:2 is an excellent result..

Van Dijk was colossal and earned the most praise…

That might be Virgil van Dijk's best performance in a Liverpool shirt. No real highlight moment but there was so much to that display — aerial presence, mopping up everything and helping youngsters Joe Gomez and Trent Alexander-Arnold through a difficult game. #LFC

The two centre-backs though, enormous. Header after header from Van Dijk, lots of good recoveries from Gomez, tackles when they needed to.

Virgil van Dijk by far and away the man of the match tonight. Phenomenal.

Great win, big Virgil immense there. Keeper spraying the ball around like Alonso. Pace on the break impossible to live with. Get in there.

Struggling to think of any player who has instantly changed so much in a team the way Van Dijk has. He wins everything, fantastic on the ball, but more crucially the leadership, game management and assurance he has brought is staggering. Absolute collosus of a player

While his defensive cohorts were also applauded…

Frustrating night for #LFC’s attackers (Roberto Firmino and Mo Salah in particular), but Virgil van Dijk, Joe Gomez and Alisson were excellent in a game to endure not enjoy. #CPFC made Jürgen Klopp's side work for everything and they did exactly that. Strong away display.

I don't plan to tweet much this season but may pop in if the season carries on like this. And finally a ref who calls decisions. Alisson's passing was a joy. VvD and Gomez off-the-charts good against the best player outside of the top 6 (although Paul Pogba isn't bad ;) )

Pretty sure Lovren will be worried watching tonight. Gomez has started the season like he wants to make that CB role his own. Outstanding display tonight & has a real understanding developing with VVD. #LFC.

Alisson magnificent tonight. A couple of really good saves, dominant in the air etc. but his distribution was just phenomenal. Pinpoint long range passes made such a marked difference to Liverpool's buildup play.

Someone needs to do a highlights reel of Alisson this game. Was outstanding without ever breaking a sweat. Caught cleanly,made some solid saves & his passing was incredible. He kept setting up attacks with his composure & vision in possession. Safe pair of gloves.

Not a game for our attackers to thrive tonight – a proper scrap. A good test of our resolve & appetite for a fight! VVD & Gomez look a real pair in the making – and Alisson just exhumes authority. This #LFC side can go on to be something special.

Reckon Alisson could find Mourinho’s happiness with a pass.