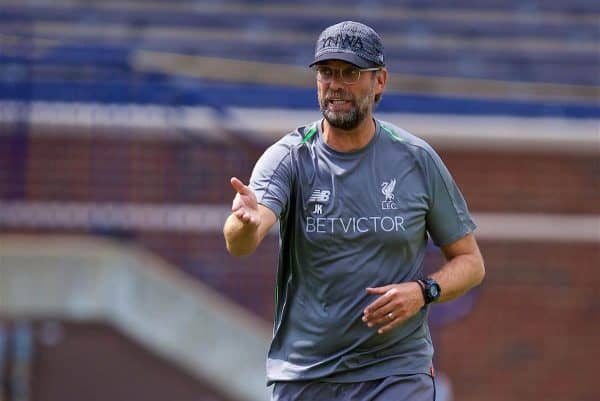 Liverpool have been linked with a move for Bayer Leverkusen winger Leon Bailey and the player himself claims two Premier League teams want him this summer.

Most local reports over the past week or so have claimed that the Reds are finished with summer arrivals, though the club hasn’t explicitly said so.

Jurgen Klopp, as with most managers, is rather cagey and cryptic when it comes to a direct question about transfer market involvement, neither confirming nor denying future business in absolute terms.

Even so, if any further incomings were to occur, most have been under the impression it would be a Nabil Fekir-type: creative centrally, playing in midfield or attacking lines, versatile and a big offensive threat.

After the arrival of Xherdan Shaqiri, bringing in an additional winger doesn’t seem to hit quite the right note—but Bailey says the Reds are definitely interested, nonetheless.

“What I can say is that my full focus is on developing myself as a young player, and that’s what I’ll focus on.

“If a club wants me, my management and Bayer 04 will take care of it.”

The Leverkusen man played both wide in the attacking line and, for a spell, as a wing-back last season, netting nine goals and claiming seven assists during the league campaign.

Chelsea are also mentioned as a side interested in his signature, and had a bid turned down for him in 2017.

Earlier reports had suggested he would cost in the region of £45 million to prise away from the Bundesliga club.

The money certainly wouldn’t be prohibitive for the Reds, particularly with several exits expected this week.

It does, however, seem a little improbable that a last-ditch move will materialise for Bailey ahead of other long-standing rumours including Fekir and Christian Pulisic.