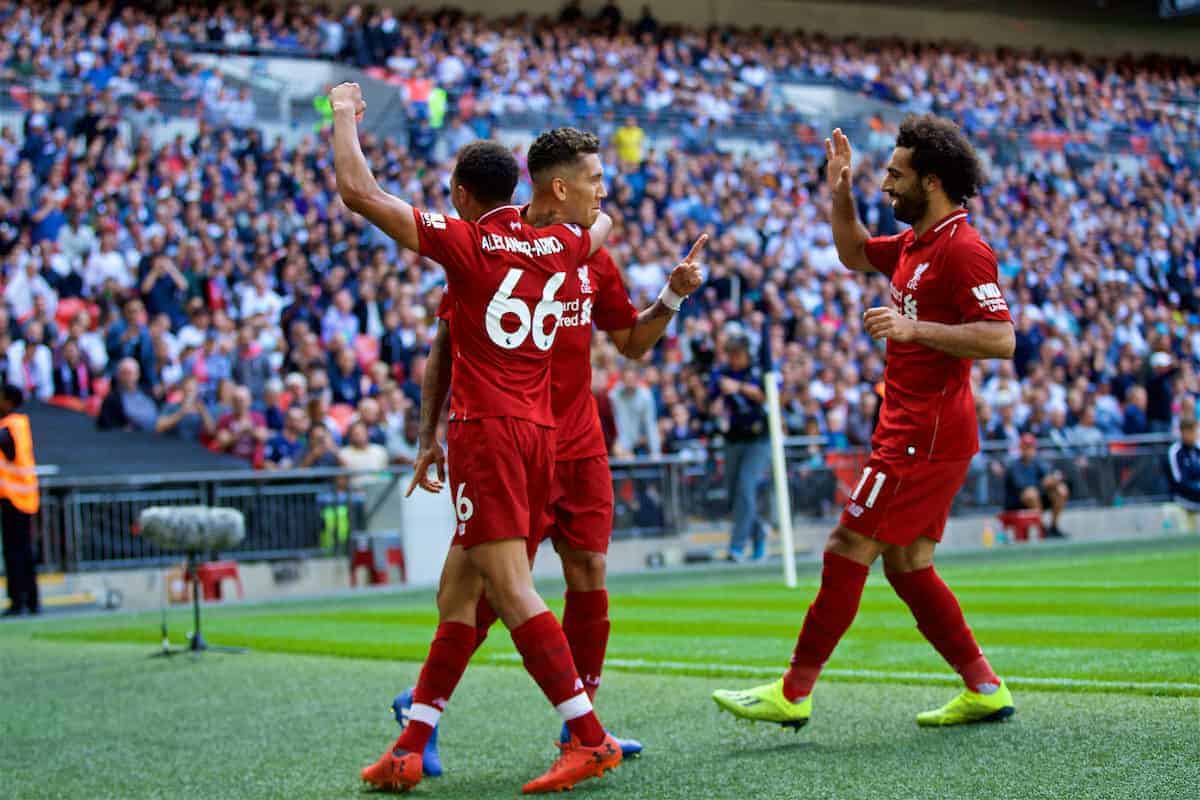 Liverpool fans were relieved and delighted in equal measure after the Reds eventually saw off Tottenham with a 2-1 win at Wembley.

The Reds made hard work of it but made it five wins from five to maintain the 100 percent winning record and flying start to the season.

It was almost an electric opening as Roberto Firmino thought he had scored after just 45 seconds, only for Sadio Mane to be flagged offside.

The deadlock was broken before half-time with a moment to savour, as Gini Wijnaldum’s header just crept over the line to finally give the Dutchman his first away Premier League goal.

Firmino did get his goal early in the second half, tapping in after a goalmouth scramble ensued from Mane’s ball across to double the lead and ultimately seal the three points.

Erik Lamela pulled one back for the hosts in stoppage time, but Liverpool held out to claim a thoroughly deserved three points and stay top of the Premier League table.

Here’s how supporters reacted across social media and on our forums.

There was shock and delight following Wijnaldum’s first away goal…

GINI IN AN AWAY GAME

I’m telling you right now, Keita has unleashed the devil in Gini Wijnaldum, and I love it.

Gini playing in the 6 role and scoring important goals. Gotta show the man some love!

There was frustration with Liverpool’s wastefulness in attack…

Think Klopp may kill Salah & Mane after the match

We've had 11 chances to put this game away beyond all doubt.

“Great win great 3 points. But how sloppy was this from Mane and Salah? This match should have been 4-5 to the good we got there at the end but still this was really poor decision making and finishing from both.”

–Illuvatar on the forums.

We had about 12 shots on target. Unheard of away from home against a top 6 side.

Klopp would have been going jail tonight if we threw those points away. Man was seething ?

FT: Klopp is going to rip a new one in the Won All 5 and Top the League Reds after that performance. Delightful.

There was plenty of praise for some individuals, though one sub stuck out as strange…

The best CB in the world is @VirgilvDijk ???? The difference he has made since he came. So calm. Can play. Strong in the air. Power! Pure power! Big fan! And he wasn’t worth the money? Bet every club wished they had him now ??

I once tweeted that I didn’t really know what @JamesMilner was on the football pitch. I do these days, and owe him an apology. He’s a terrific, versatile and intelligent footballer. My bad.

Manuel Pellegrini nailed it on the 32-year-old in a 2015 Guardian interview #LFC pic.twitter.com/dofCHILZSK

So impressed by how Milner and Wijnaldum saw over £100m worth of elite midfielders coming into the squad this summer and thought, 'I'm keeping my place.' Hard work paying off. #LFC

The Matip late sub always seems to weaken rather than enforce the defence.

I hate that Matip sub. Hate it.

Fans were ultimately over the moon with a fifth straight victory…

3 points at Wembley against the Spurs today for Liverpool! 5 wins in 5 matches for @LFC #TOTLIV pic.twitter.com/kEIHylpmX2

Up the winning a game by being good in defence and midfield but a bit rubbish up front Reds. ?

Big big deserved win. Not at our best but still better than Spurs team that will also be challenging near top of the table.

Other than the last 2 minutes that was pretty damn easy. #LFC

“Easier than I thought and only our rusty form stopped us from proper battering them.”

– Scott Jones on the forums

#LFC Nice 3 points, apart from that last goal, we were very comfortable. Winning games when we're not at our best, good signs :)

Get in there you mighty fucking red men. What a result that is. Town>Ibiza ??

YESSSSSSSSSSSSS!!! Should have been 5 goals, somehow only win 2-1. 5 of out 5 and big win over a top team away from home

Some wins are big, some are huge? That one is proper huge!!! I’m never having more kids but if I did they would all be called James, bloody love Milner! 5 wins, top of the league and still nowhere near top gear – with squad to back it up at last #LFC #Milner #Top #stellaforlumch