Jurgen Klopp has made eight changes for Liverpool’s League Cup third-round clash with Chelsea, as Fabinho comes in to make his full debut.

The Reds continue their crucial, busy run of seven games in 23 days with a change of tournament, as one of their Premier League rivals make the trip to Anfield.

Under Maurizio Sarri this season, Chelsea have lost just once so far, that being his first competitive game in charge against Man City in the Community Shield in August.

They are now on a run of seven games unbeaten, but unlike Liverpool no longer boast a perfect record, having been held to a 0-0 draw by West Ham on Sunday.

With seven wins in seven, tonight’s hosts are the most in-form side in England, and this has come with Klopp making changes in key positions in the past two games.

This is no different at Anfield this time out, as Klopp has taking a rotational approach to the League Cup—with one eye on Saturday’s reverse fixture in the league.

Simon Mignolet starts in goal, making his first appearance of the season, with Kamil Grabara taking his place on the bench as Alisson takes the night off.

Ahead of the Belgian, Nathaniel Clyne, Joel Matip, Dejan Lovren and Alberto Moreno start in defence, with three of those making their first starts.

Fabinho is set to marshal the midfield, joined by James Milner and Naby Keita, who will be looking to make his mark after a spell out of the starting side.

And up front, Xherdan Shaqiri, Sadio Mane and Daniel Sturridge can hope to keep the momentum going and fire Liverpool to the fourth round.

On the substitutes’ bench, Curtis Jones, Mohamed Salah and Roberto Firmino give Klopp options if changes are required. 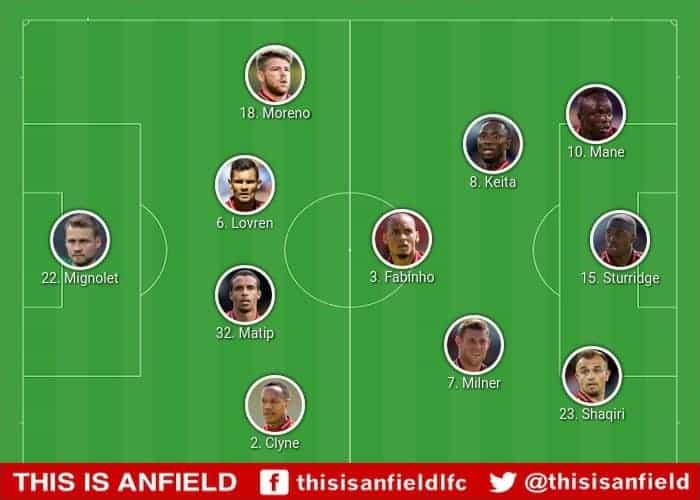