The Three Lions were looking to respond after Saturday’s 2-1 defeat to Spain, as they faced the Swiss in a friendly at Leicester City‘s King Power Stadium.

Alexander-Arnold was named in Gareth Southgate’s much-changed starting lineup – the manager made nine alterations in total – taking up a right wing-back role in a 3-5-2 formation.

Shaqiri starred in Switzerland’s 6-0 mauling of Iceland over the weekend, and he was used as a No.10, dovetailing with striker Mario Gavranovic.

Henderson was among England’s substitutes, which will have pleased Jurgen Klopp ahead of Saturday’s trip to Wembley Stadium to face Tottenham.

Shaqiri was gifted an early chance following a mix-up between Jack Butland and James Tarkowski, but the Liverpool man fired just wide with his weaker right foot.

It was then Alexander-Arnold’s turn to be in the action, with the 19-year-old’s whipped delivery from a wide free-kick leading to Eric Dier heading wide. 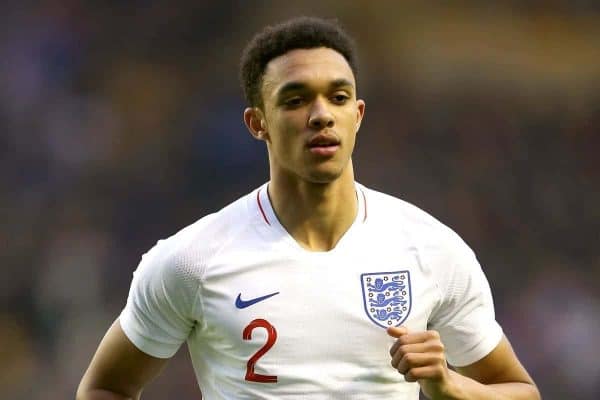 He then hit the target with another set-piece effort, although his well-struck shot was comfortably saved by Yann Sommer.

It wasn’t all positive for Alexander-Arnold, however, who misjudged one cross that almost led to Ricardo Rodriguez pouncing at the back post.

A goalless first-half had seen Switzerland edge proceedings, with some of England’s general defending leaving a lot to be desired.

It was Southgate’s men who took the lead early in the second half, though, with Marcus Rashford finishing from close-range from a Kyle Walker cross.

Shaqiri looked set to equalise shortly after the hour mark, but a last-ditch block from John Stones saw the ball fizz over the crossbar.

Henderson was introduced with 68 minutes on the clock, and he immediately added more purpose on the ball in midfield, as well as picking up a booking.

Both Alexander-Arnold and Shaqiri came off late in the day, as an improved Three Lions performance ensured they ran out narrow winners.

Gomez was left as an unused sub, which means the Reds’ England trio should return without any injury.