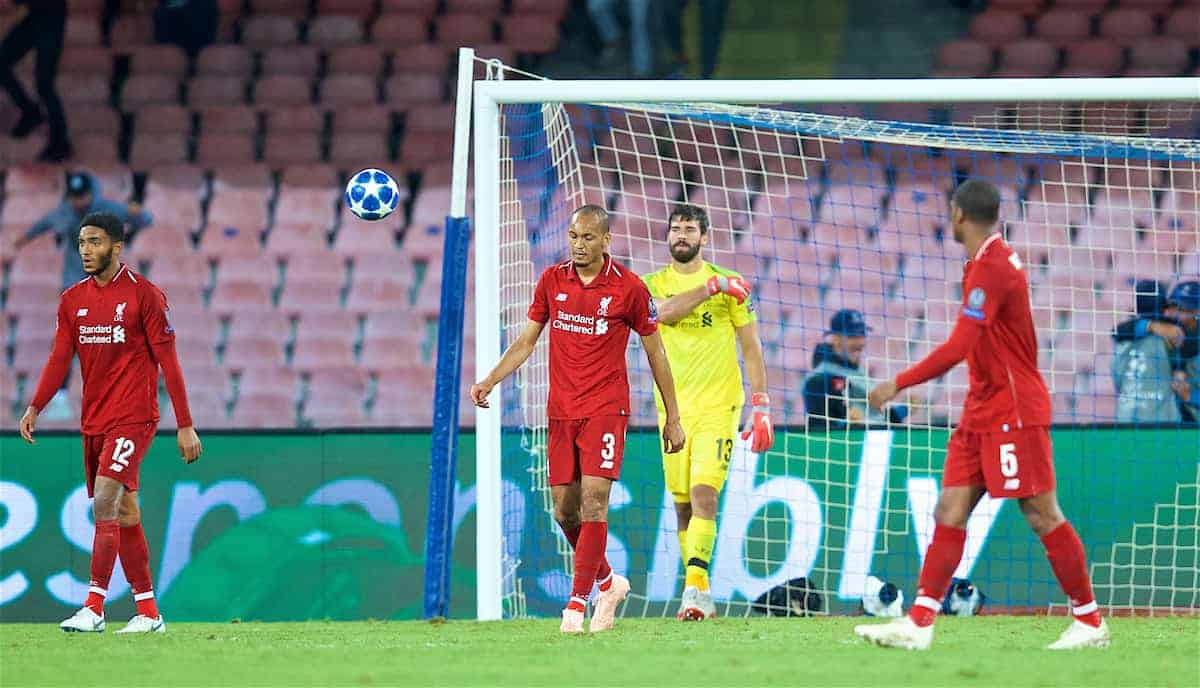 Liverpool were undone by a last minute goal in the Stadio San Paolo as Lorenzo Insigne gave the hosts the win they deserved. An under-par performance from front to back was matched on the bench as Jurgen Klopp‘s plan to get a point away from home backfired.

A couple of big saves as the start of the second half complemented his actions during the first period – most notability a strong hand to a shot by Milik on the half-hour mark.

Beaten in the final moments by Mertens but thankfully the substitute could only shin the ball on to the bar, not so fortunate moments later as Insigne tapped in a winner.

Pocketed Neymar on matchday one but this was one to forget for the teenager. Positionally poor and uncharacteristically gave the ball away under no pressure.

His night was summed up on the hour mark as he was caught out of position then failed to trackback.

On a night when many failed to turn up it was Gomez who shone above – worked tremendously with his centre-back partner. Unafraid to drive the attack he stormed forward at one point, in an effort to bypass a particularly static midfield.

His stock as a first choice centre-back just keeps rising the more minutes he gets under his belt – clearance off the line showed just how well he can read the game.

Could be ultra-critical by looking at his role for the goal, but major error happens long before he’s involved in the middle.

Worked well with Gomez to close down any thoughts Napoli had of playing through the middle to Insigne and Milik.

Very strong early on as the hosts looked for a quick goal, got an almighty kick off Koulibaly who amazingly only received one yellow card despite committing numerous fouls. Excellent block at the near-post that saved a certain goal just as the hour approached.

Saw a lot of the ball as Liverpool looked to build a majority of attacks down the left, for the first time this season his end product was poor.

Defensively OK, had a run in with Callejon all evening – the winning goal allowed the Napoli player to say he won the battle. 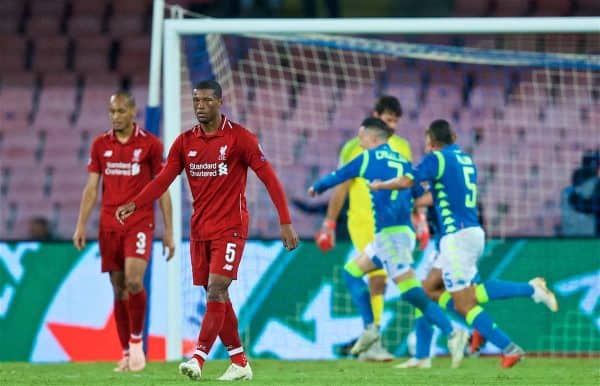 Very pedestrian first half, was almost anonymous bar one tame shot that didn’t threaten the goal at all.

Improved during the second half once he’d adjusted to being out of the central position. Didn’t really do anything wrong yet also managed not to do anything with an end product that warranted a mention.

It’s a shame he had to move from the deep-lying role where he now looks most effective.

Arguably Liverpool’s best midfielder of late – not here. He looked tired from the opening moments and it was surprising he lasted as long as 76 minutes.

Was eventually replaced by Fabinho and on this performance it’s a good job Liverpool invested in the squad as cover in this area will be vital.

Unfair to expect the elder statesman to play at 100% week in, week out.

Keita’s Reds’ Champions League debut will be one to forget for the summer arrival. He was wasteful in possession and looked lost at times during the opening five minutes.

Replaced on 19 minutes with a what looks to be a worrying back issue. He can and will offer more to this Liverpool side, just hope his injury isn’t a bad one. 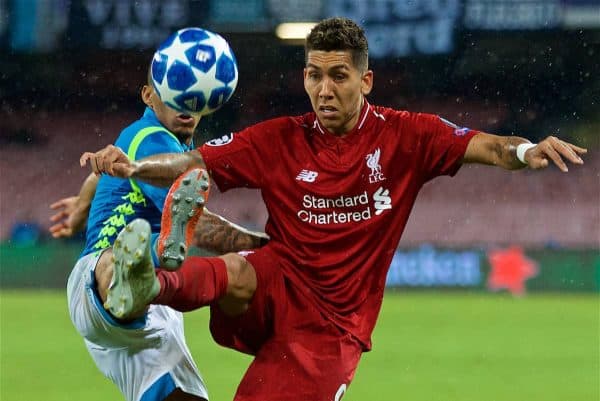 Worked hard, did little else – but in his defence, it must be hard to try and carry those either side of you and live off scraps when neither full-back attacked as usual.

A lot has been made of the Egyptian’s game of late. Is he in a slump? Some say yes, some say no – he started last season by missing more than he scored.

He cut a frustrated figure but did work exceptionally hard – whatever is bothering the golden boot winner let us hope it either drifts away soon, or he blasts it out of his system shortly.

Struggled to make a one-on-one with five minutes left – it was one he’d have fired home six months ago.

He could really use with being ‘injured’ during next week’s international break.

Another Liverpool forward who has been under par of late; he gave the ball away needlessly – especially in good areas on the odd occasion an attack was mounted.

For all the talk of resting forwards it could be argued it’s the Senegal international who needs one.

Came on early due to the injury to Keita and looked like a man on a mission. Unfortunately the mission for Liverpool looked like it whimpered out shortly after.

Looks way short of his price tag at the moment. Not a good night for any of the midfield five-some.

Had one minute to find an equaliser. Not sure if he touched the ball. Should have been on far earlier.

Game plan didn’t fit the players or Liverpool’s brand of football. Outdone by Ancelotti in the end as the Italian opted for a 4-4-2 that stifled a 4-3-3 that had no appetite to attack.

Subs were very defensive, and seemed far too late – a criticism often aimed at the boss.

One loss and two draws isn’t exactly the form needed as Manchester City await the Reds over the weekend. Planning not to lose isn’t the way this exciting Liverpool side powered to the final last year – let’s not try it again.