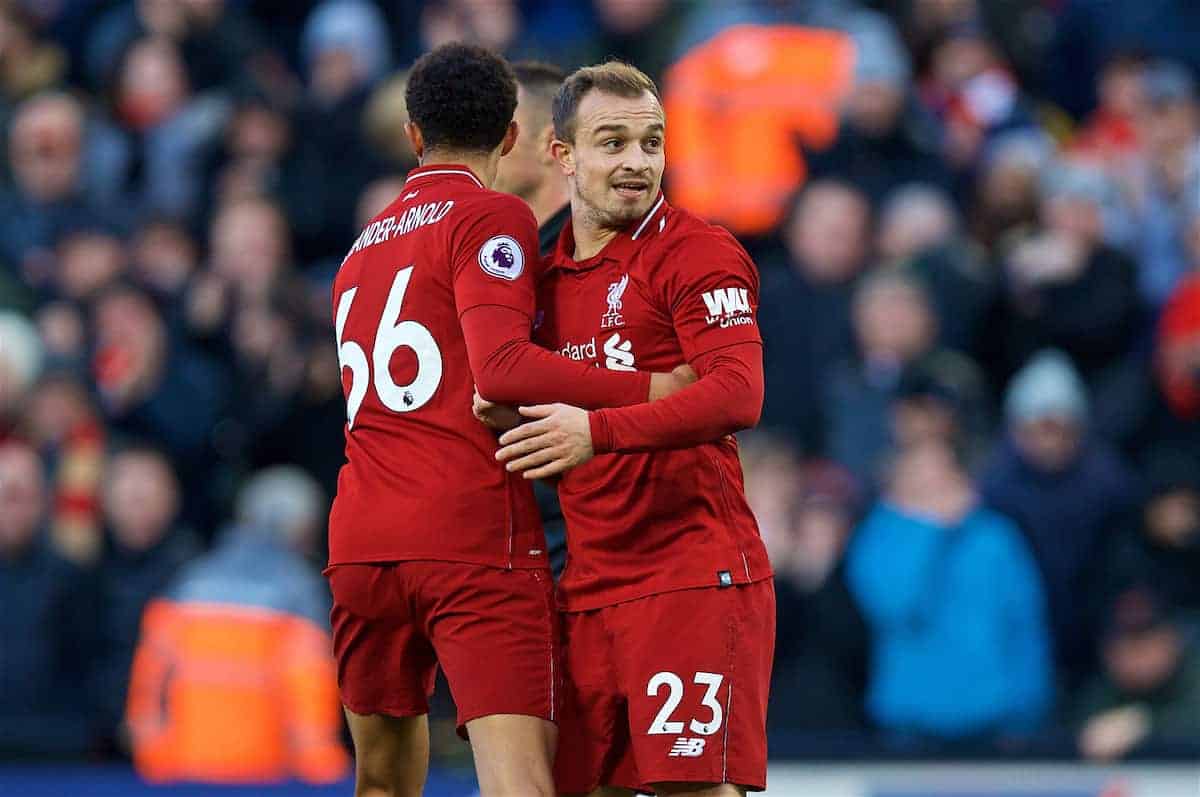 Liverpool earned an impressive, hard-fought 4-1 victory over Cardiff City on Saturday afternoon, going top of the Premier League in the process.

The Reds produced spells of genuine brilliance against a spirited Bluebirds outfit, on a day where the positives comfortably outweighed the negatives.

Mohamed Salah and Sadio Mane fired the hosts into a 2-0 lead, only for Callum Paterson to end Liverpool’s long run without conceding a home league goal.

Fortunately, Xherdan Shaqiri scored a brilliant maiden effort for his new club and Mane finished off the scoring in the dying minutes.

Here’s how supporters reacted to Liverpool’s 4-1 win on social media and our forums.

Fans were resoundingly positive at full-time, with Rhian Brewster heaping praise on his team-mates…

Ruthless, efficient, clinical Liverpool – apart from that one moment – the quality and depth of the #LFC squad now is frightening.

Great performance from the boys, onto the next one… Congrats to @XS_11official on his first goal too! ? pic.twitter.com/vtM2bkEfHl

Klopp seems to love a 4-1 against a City. pic.twitter.com/PcGoczI0Jb

“A win and 3 points, but lets not kid ourselves wasn’t a great performance from the team.”

A very good performance from Liverpool. Our front 3 are finally clicking. Fabinho and Shaqiri should play more often for us!

WHAT AN ATTACKING PERFORMANCE!!! Still annoyed about that needless unlucky goal we leaked but what matters is the 3 points and an absolute peak 2017-18 Liverpool performance. YNWA.

“Odd game. Started well, scored early then failed to make dominance count. Started second half off the pace, scored a good second, conceded and then turned it on properly after that. Scoreline is comfortable but we weren’t at our best for long spells.”

Shaqiri is our best passer of the ball by a mile right now! Love watching him.

What a signing Shaqiri is. The gulf in quality between him and Lallana was enormous. Beauty of a first Reds goal.

Shaqiri excellent when he came on today. Klopp may want to go with 3 CMs at Arsenal next week but very hard to keep Shaqiri out at the moment.

The difference in cutting edge when Shaqiri replaced Lallana was huge. The former looks a much better fit in this Liverpool side, the latter struggling with the pace of it.

“Shaqiri must start in front of Lallana every game. Top of the league.”

Some response. Late goal conceding certainly rubbed Klopp up the wrong way. Shaqiri needs some serious praise, he's raised his game to a level where he walks into this team and just clicks. Huge points. #LFCdigest

Shaqiri’s the way forward whilst Keita regains fitness. By far the most creative option #LFC have for that midfield at the moment.

Shaqiri has been absolutely brilliant, deserved

“Shaqiri a huge difference from the bench, he must play from now on as he really does free up our front 3 to do what they do best.”

Fabinho did well once again, shining alongside Gini Wijnaldum…

Fabinho really impressive again. Several important tackles/interceptions in key moments, and so progressive in his use of the ball. Offers so much more than a traditional DM. Already making a notable difference to the side.

Not great, but a three goal deficit and lots of positives. Goal we conceded was unlucky. Fabinho and Wijnaldum good together again

“Fabinho was pure class tonight. Looks like a great signing.”

Big fan of Gini and Fabinho in midfield.

Sadio Mane and Mohamed Salah: if these are players out of form, they might turn out to be quite useful when they really are in a rhythm…

Big fan of ‘out of sorts’ Salah scoring four goals and registering two assists in the last eight days.

Mohamed Salah (1 goal & 2 assists v Cardiff) now has 50 PL goal involvements since joining @LFC in July 2017, 12 more than any other player in that time.

– Danny on the forums.

Brilliant result and finally two great attacking performances in a row. Salah back to his best. Shaqiri and Mane with beautiful strikes. Have to hope Spurs and City cancel each other out! Come on! ????