Restricted to cameo roles in the Champions League thus far, fans have had their say on whether Fabinho should play for Liverpool against Red Star.

The holding midfielder made sub appearances against both PSG and Napoli, and finally made his Premier League debut off the bench at the weekend.

All told he has featured for just 122 minutes this season, with the vast majority coming in the League Cup defeat against Chelsea—his only start to-date.

But with injuries mounting in the centre of the park and the Reds not quite at their fluent best in possession, Jurgen Klopp may be considering further changes.

And Reds fans are united in their belief that a first start of importance should come on Wednesday for the Brazilian, after This Is Anfield asked on social media whether he should play at Anfield against Red Star Belgrade. 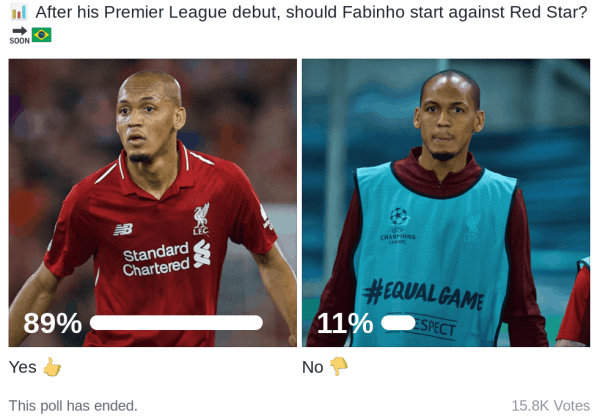 Facebook users sided overwhelmingly with Fabinho coming into the starting XI, with a massive 89 per cent of more than 15,000 voters wanting to see him on the team sheet.

Twitter users followed suit in even more emphatic fashion, voting 90 per cent to 10 for the No. 3 to start.

With Jordan Henderson going off injured against Huddersfield, James Milner picking up a knock and Naby Keita sidelined after international duty, Klopp has a decision to make.

The Reds are likely to dominate against Red Star at Anfield, meaning much of the deepest midfielder’s role will involve recycling of possession, stopping counter-attacks and trying to keep the tempo of the game going.

Gini Wijnaldum has proven more than adept at this from the No. 6 role this term, but could be used further forward.

Indeed, Wijnaldum-Fabinho impressed as a pairing in the latter stages of the weekend win, and starting them both could allow Xherdan Shaqiri to reprise his role as an attacking midfielder to bring creativity through the middle.

It’s a must-win game for Liverpool, and it could well be the Brazilian’s first taste of a big match for the Reds.

If it was down to supporters, he’d certainly be in the lineup!