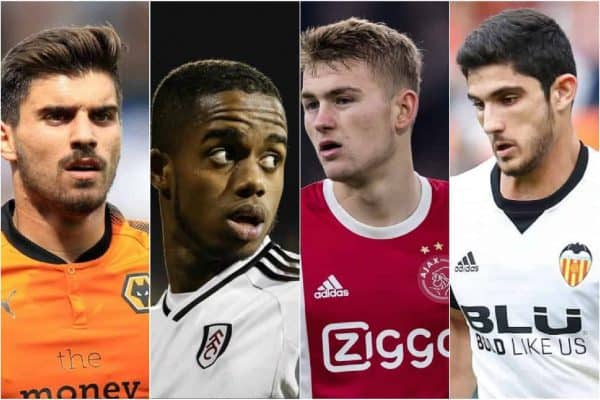 Liverpool always have an eye on the future and there’s little more exciting than the arrival of a genuinely top-class starlet. Who should the Reds be watching?

In recent seasons, the best young players have been transferred for ever-higher values, with Kylian Mbappe topping the charts at €180 million this past summer.

Around the game, there are a handful of stand-out prospects who are already showing the capacity to be the next generation of elite—including a couple at Liverpool, in Trent Alexander-Arnold and Joe Gomez.

Here we take a look at 10 who the Reds should be keeping an eye on as potential recruits, next summer or beyond: all are aged 22 or under and not yet at the truly top clubs—so no Ousmane Dembele, Mbappe or Rodrigo Bentancur!

Some have already been linked with moves to Anfield; feel free to get extremely excited if any of them actually put pen to paper at Melwood any time soon.

Probable price tag: £100 million. The Reds were linked last summer and his price tag will have gone up again since then; the £75m paid for Van Dijk will be the yardstick.

Best traits: Imagine having Virgil’s partner from the national team next to him on a weekly basis.

He’s strong, good on the ball, a natural leader and plays on the right side of defence. Had Gomez not emerged the way he has done, De Ligt would be considered the perfect foil for the Reds’ most expensive signing.

Probable price tag: Between £50m and £100m depending on which reports you read. Barcelona have been most-heavily linked.

Best traits: Incredible agilty and technique in possession, able to glide past opponents in possession and produce defence-splitting passes.

Loves to get on the ball and make the team tick. He’s creative, can play any midfield role—from deepest of three to just off the striker—and has improved tactically a huge amount over the last 18 months.

Probable price tag: Around £70 million. He plays for Lyon, after all, so we’re well-versed in Jean-Michel Aulas’ negotiation tactics.

Best traits: Aside from being a great ball-winner from a deep midfield role, Ndombele has the great drive and acceleration to suddenly surge past multiple challenges, pushing his team upfield.

Impressive in possession, keeps it simple more often than not but isn’t afraid to try a more creative approach if he gets on the ball higher upfield.

Best traits: A central schemer by trade but has found his niche as a creative player in a narrow right-midfield role.

Good crosser, good dribbler, excellent passer, has good timing with his forward runs and isn’t shy about getting stuck in to win the ball back.

Probable price tag: Over £50m. Has already been loosely linked with the Reds, but Fiorentina are keen to keep hold of him.

Best traits: Powerful and with a big build for a wide player, hard-working and capable of niggly fouls as he terrorises the back line.

In possession he’s skilful, has a fierce shot and can use either foot. Has played in midfield but looks more at home as an attacking option.

Probable price tag: Has been linked with Spurs, Liverpool and Man United for in excess of £40m. That will only increase after a season in the top flight.

Was a real threat in the final third in Fulham‘s promotion season and his runs off the ball were in evidence against the Reds recently.

Will be interesting to see how he performs across the remainder of the campaign, with a new manager in place and, potentially, the team improving as a whole.

Probable price tag: £40 million. Another with long links to the Reds.

Best traits: First and foremost, a great range of passing from the centre of the park.

Neves is a real all-rounder, equally capable of shielding the defence or helping to break down opposition back lines.

Has a great strike from range and is a set-piece threat, too.

Probable price tag: £4m on Fantasy Premier League, where he first rose to prominence for many. In the real world, he’s probably worth 10 times as much, despite his inexperience.

Best traits: Great pace and the dribbling ability which highlights his upbringing as an attacker.

Has emerged as a full-back for Palace and takes the defensive side of his role seriously, with some crunching tackles and great recovery endeavour on show.

Luka Jovic, Eintracht Frankfurt (on loan from Benfica) and Serbia

Probable price tag: Jovic has both a £40 million release clause and plenty of Liverpool-featuring rumours to his name.

Best traits: Goalscoring, and everything that goes with it.

Clever movement, hard work, a great first touch and the awareness to pick out team-mates in the final third.

Scored eight in 22 league games last term; has nine in nine this season, which showcases his rise.

Probable price tag: Just moved for around £36 million, so north of that figure.

Best traits: Lightning pace, a rocket shot and clever dribbling into space. Plays the opposite flank to the aforementioned Soler, but in a much more direct, attacking style.

His movement and instinct in the final third make him a great option as an inside forward, but it probably isn’t his long-term role.

Forget his World Cup shocker, Guedes is made to play as a forward, perhaps a second striker.

We could go on with some stunning talents out there, so here are the best of the rest.

Lucas Paqueta is already primed for a January switch to AC Milan from Flamengo, but bears watching over the next 12-18 months regardless.

Other forwards of note include Maxi Gomez of Celta Vigo and Ismaila Sarr at Rennes in France. Junior Firpo and Pablo Fornals are two more top prospects to watch in LaLiga, while Giovanni Simeone is an exciting forward for Fiorentina and Argentina.