Jurgen Klopp has made three changes to his starting lineup this evening, as Liverpool take on Red Star Belgrade in the Champions League group stage.

The Reds arrived in Serbia on Monday, with the manager naming a 21-man squad for their fourth game in Group C, omitting Xherdan Shaqiri.

Shaqiri was left out to “avoid distractions,” according to Klopp, due to his Kosovan roots and this deprives Tuesday’s away side with a key threat.

Regardless, Klopp has fielded a strong XI at the Rajko Mitic Stadium, looking for a repeat performance from the 4-0 thrashing of Red Star last time out in Europe.

In midfield, the continued absence of Jordan Henderson (hamstring) sees Gini Wijnaldum, James Milner and Adam Lallana start, with Fabinho and the fit-again Naby Keita on the bench.

And with concerns over Roberto Firmino‘s productivity emerging, Mohamed Salah, Sadio Mane and Daniel Sturridge take their places in attack.

Leaving Shaqiri behind ensures Klopp is without one of his regular backup options on the bench, though he can still call upon the likes of Firmino, Keita and Divock Origi in Belgrade. 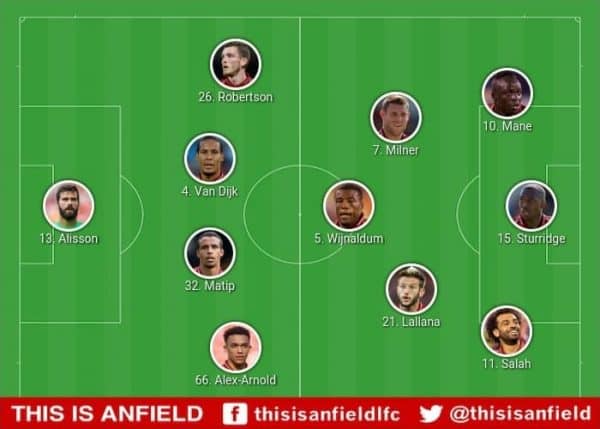