Jordan Henderson missed England’s Nations League win over Croatia, but should be fit for Liverpool’s weekend clash against Watford.

The captain has struggled for regular action this season, missing part of the start of the campaign following a late return after World Cup duty and then suffering injury issues.

Henderson missed several games recently due to a hamstring strain, with his return to the side coming against Fulham just before the international break.

He featured for England against USA, playing around half an hour as substitute, but missed the decisive Croatia fixture again due to a hamstring complaint.

However, the Echo report that this was merely as a precaution, with the skipper hoping to return at the weekend. 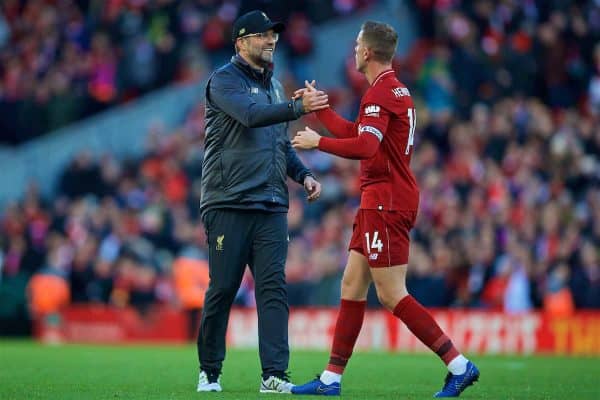 Henderson has made 13 appearances this season, though starts have been sporadic and he has amassed less than 700 minutes of action all told.

In his absence, Jurgen Klopp has turned to both Gini Wijnaldum and Fabinho in the deepest midfield role in a three, while the duo have also paired up neatly in a double-pivot.

With Naby Keita also back to fitness after his own injury struggles, Klopp will have a big decision to make over a regular midfield combination in the coming weeks.

Monday evening sees the final batch of players in action, with Roberto Firmino, Alisson and Fabinho on duty for Brazil and Andy Robertson set to captain Scotland once more.

If the quartet emerge unscathed, Klopp should have a full complement of players to pick from, with the exception of long-term absentee Alex Oxlade-Chamberlain.