After the departure of Slavisa Jokanovic, Liverpool have now seen off more Premier League managers than any other club.

Of the 157 dismissed during a league season, and with a tenure of at least two months, Jokanovic is the tenth to be removed after facing Liverpool following Fulham’s 2-0 defeat at Anfield.

This moves the Reds one clear of Chelsea and West Ham at the top of the list. 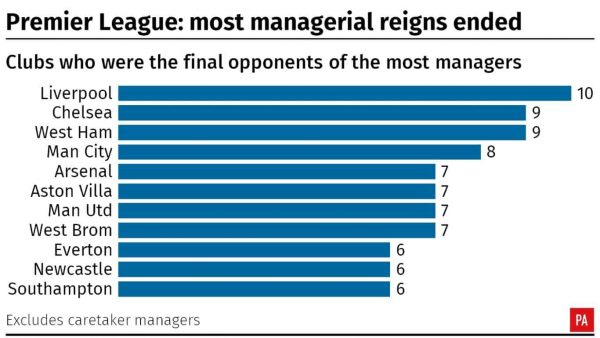 The Cottagers sit bottom of the Premier League having won just one of their opening 12 games, conceding 31 goals – as a result, Jokanovic has been replaced by Claudio Ranieri, who won the Premier League title with Leicester in 2016.

Facing Tottenham is not as ominous however, with Mark Hughes’s tenure with the Citizens and Roy Evans’s spell at Liverpool the only two reigns to end following a match against Spurs.

West Brom are one of the more surprising names near the top of the list, with all seven of their “conquests” coming this decade, starting with Chris Hughton at Newcastle in 2010 and ending with Craig Shakespeare’s Leicester.

Five of Liverpool’s 10 victims have come in the same time, with Slaven Bilic their previous scalp.