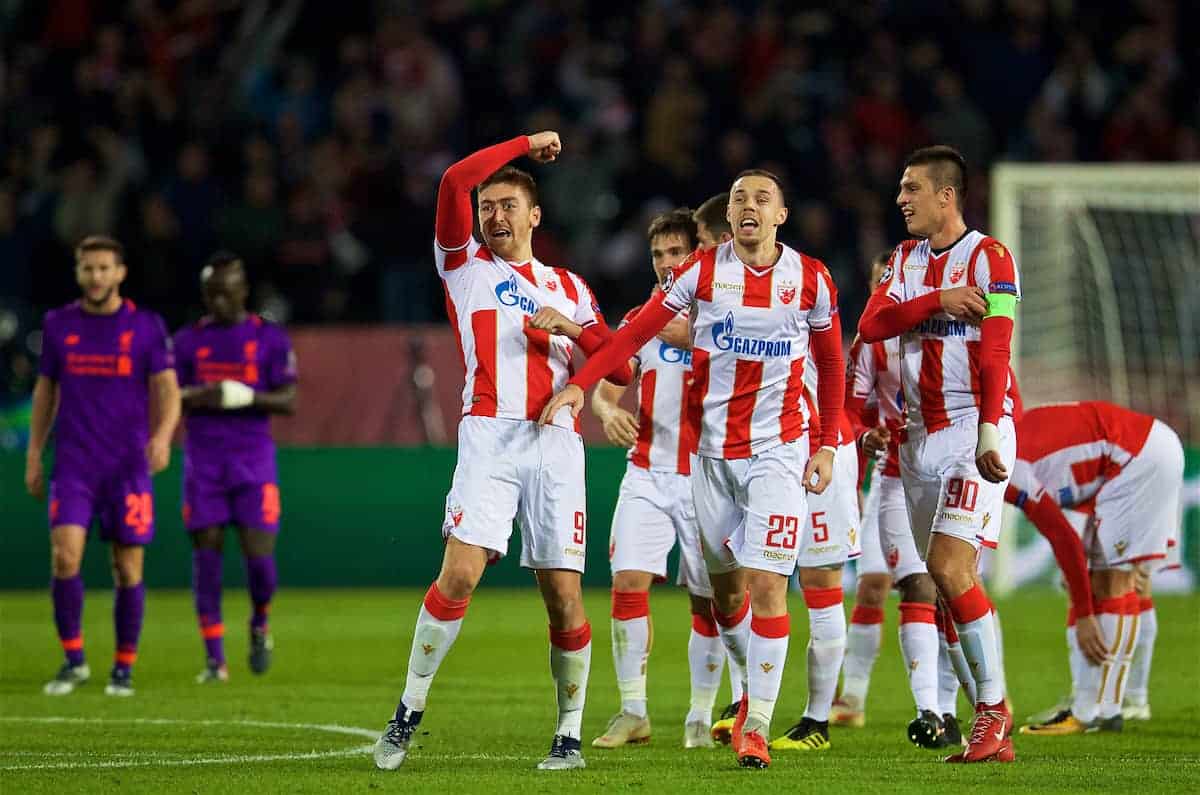 Liverpool fell to a 2-0 defeat at Red Star in the Champions League, with fans unhappy at the selection and performance of several players.

Adam Lallana was again well below-par in a difficult first half for the Reds.

Pure petulance from lallana. He is so far off the pace it's untrue.

I think Klopp is trying to will Lallana into good form. It's not gonna happen man.

Though in fairness, few players came out of the first half with any credit at all as the Reds went in two down at the break.

These 30 minutes have arguably been Liverpool's worst since the FA Cup tie against West Brom in January. So many players look off the pace; Red Star, by contrast, have been superb

How many better options than shooting are there in this situation? pic.twitter.com/wJTFNhUbA7

The lethargic performance didn’t go down well, with a lack of pressing or creativity leading to no goal threat.

If our game plan for the last 20 was to have James Milner put in terrible cross after terrible cross, then we carried it out to perfection

Adam Lallana, James Milner and Gini Wijnaldum won ZERO TACKLES in that first half. £90m on the likes of Fabinho and Naby Keita only to start this embarrassing lot in a crucial CL tie.

I've never been this angry in a long long time. Fix the fuck up.

“Diabolical. No creativity whatsoever – we are missing the ox – there has been no gegenpress this season whatsoever.” – Nabhan Hashim Shiraz on Facebook.

“This is what happens when you have a totally toothless midfield, there is nobody feeding the front 3, 2 behind already, and I fear it will get worse, shocking play.” – Tim Price on Facebook.

Jurgen Klopp took a fair amount of the blame for his tactics and selections.

Jurgen Klopp deserves a lot of criticism for this result.

All well and good fans expecting a win because of Red Star's reputation, but he clearly didn't show enough respect with his team selection.

Liverpool have put unnecessary pressure on themselves with an abject display.
Shocking in midfield and disjointed in attack, compounded by conceding two soft goals.
In truth, it started with Klopp making some odd team selections and substitutions.

Klopp to blame. No one else. Chose the side, set it up. This has to be THE wake up call for the attack. The defence couldn't bail us out this time. Something's not right upfront and needs sorting soon. Pity though there's an international break coming up. Team needs sorting out.

“Klopp has no idea needs to stop underestimating teams” – Moses Labistour on Facebook.

“JK ‘s change of tactics to consolidate defence this year has only succeeded in producing toothless midfield and attack…. Shambolic.” – YNWA It Means Never Ever on the forums.

Positives were few and far between and fans feel the forwards must now step up in a big way.

Salah has shot from a corner in every game since he scored that one against Swaziland.

Swaziland, who are ranked 139th in the world. ?

Turns out starting to play at 0-2 isn't such a good idea… and if that Sturridge miss at 0-0 looked bad at the time, well…

Don’t have a go at Salah and Mane when Firmino’s been just as terrible for weeks. Just ‘cause he’s Brazilian doesn’t excuse him.

“Attack that is at best inconsistent, turns over the ball far too often, and struggles to create good chances.” – Arminius on the forums.

The route to reaching the last 16 looks difficult indeed now for the Reds…though not impossible, if form is rediscovered.

The best result tonight in the other group game between Napoli and PSG for Liverpool is a PSG win. That means whatever happens in next group fixtures, a Liverpool win at Anfield against Napoli in the last fixture will guarantee progress for The Reds.

Group of death proving to be just that.
But it’s not all doom & gloom LFC supporters. Regardless of the PSG/Napoli result, Liverpool still control their own destiny in this group (even though the road to the group of 16 just got a whole lot more difficult)

“It’s funny, we have put ourselves in a situation where we may need to top the group to qualify – quite likely need two wins, which has a good chance of topping the group. Four more points could well be third.” – Arminius on the forums.

“I think I’ve given up qualifying, this was a shambles. Not even a shot on target until the 70th minute. As for spending five minutes passing it around at the back for it only to go forward and be lost.

I give up, not sure what needs sorting but it does.” – mattyhurst on the forums.