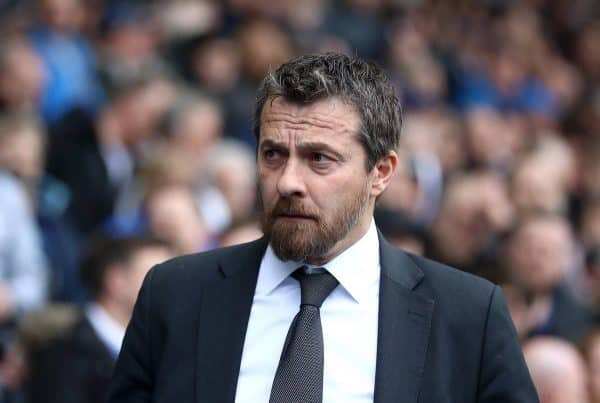 Struggling Fulham manager Slavisa Jokanovic has admitted he is still searching for his “best team” as he seeks a big result at Liverpool on Sunday.

The Cottagers have won just once in the Premier League this season, heading into the weekend rooted to the bottom of the table with just five points from 11 games.

This comes with Jokanovic having used 22 different players so far, of which 21 have started at least once in the English top flight, including three different goalkeepers.

Only backup forward Floyd Ayite hasn’t featured from the start, while Jokanovic has used five different formations as he searches for the right fit.

As pressure mounts on the Serbian ahead of a clash with the league’s fourth-most prolific side, he faces a difficult task to plug a defence that has conceded more than any other (29).

And regardless of the personnel he fields, speaking at his pre-match press conference on Friday, Jokanovic urged his players to give their all at Anfield:

“I don’t look for the best four [individuals] at the back, or find the ‘best’ XI.

“I am not trying to find best players, I am finding the best team, who have possibility to win the game.

“Liverpool are an important team in the Premier League, they are dangerous with important weapons.

“We must work together and show people we are a team and must be available to go into battle and be brave.

“We must defend, at the end of the day this is the aim.

“If we are jogging on the field and people think they will get a present, this is the wrong way and we must show more effort.”

Jokanovic, who was bullish is responding to questions over his future, paid respect to opposite number Jurgen Klopp, and rejected the prospect of facing a weakened Liverpool side.

Despite the 2-0 loss to Red Star on Tuesday, Jokanovic insisted he “doesn’t believe they are so affected from the last game,” again stressing that Fulham need to “fight”:

“Liverpool are coming from a defeat and are hurt, but we are hurt more than Liverpool and they will show some more imagination than the last game they lost against Red Star.

“We need to be more motivated and be ready for a fight, be ready for battle, don’t give up and in our plans there exists a way to win the points.

“My people will be ready for the fight and to make our supporters proud.

“OK, the result and the points are more important, but if you are not available and don’t meet this level to win the points, there only exists a way to lose the points.

“We need to immediately improve in a way to win the game.

“If we are confused, scared and play like kids, it’s not easy for any team.”

Fulham arrive at Anfield on the back of six consecutive losses in all competitions, with their last win coming away to Millwall in the League Cup in September.