Jamie Carragher believes this season’s Champions League fixtures have worked favourably for Liverpool and they’re at the top of European football to stay.

The Reds make the trip to Red Star Belgrade on Tuesday night, looking to remain top of Group C and possibly even widen their lead.

Back-to-back matches against the Serbs have been kind to Jurgen Klopp and his players, with Paris Saint-Germain and Napoli locking horns twice in the space of a fortnight.

Speaking to The Redmen TV, Carragher says it couldn’t have panned out much better for Liverpool, with the weakest team in the group always the preferred opponents in the middle fixtures. 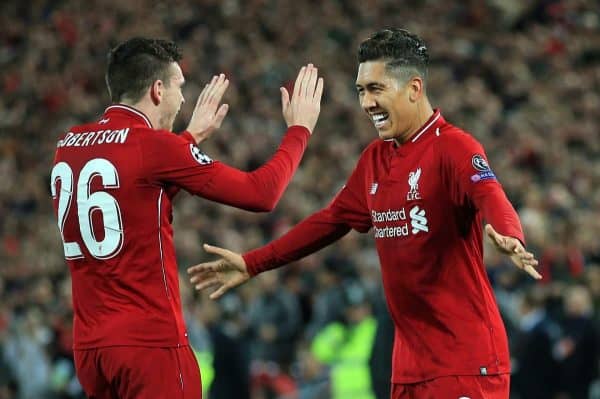 “I always think games three and four are massive in a group. Whatever happens in the first couples of games you can make it up if you get the opponent that you want.

“No disrespect, but Red Star are the weakest in the group. It will still be tough going there because Napoli drew there and the first 20 minutes wasn’t easy (at Anfield).

“But it gives you a chance if you can get four to six points and hopefully the other two games go your way, in terms of maybe two draws or one team wins both games.

“I was delighted Paris Saint-Germain got the equaliser (at home to Napoli), so hopefully if that can be another draw and we can get another three points it puts us in a great position for the last two games.

“If you actually do well in game five you may not need game six. When the draw came out I was pleased how the games came out for Liverpool.”

The legendary former centre-back also spoke about the belief last season’s road to Kyiv will have given the squad, using his own 2005 heroics as an example.

“At the start of last season no Liverpool player, or the manager or the supporters, believed they would get to the final.

“We just wanted a good run in the competition. The fact the team got there doesn’t mean they’re better than we thought they were, they’ve just got more belief and confidence no matter who they come up against now.

“That belief in 2005 for us meant we got to another final in 2007 and were regularly at the semi-finals and quarter-finals stage.

“We never won it again, but every team we played in after that was better than 2005.

“It just gave us massive belief and I think over the next three or four years with Jurgen Klopp and this team we’ve got to be looking at quarter-finals and semi-finals—fingers crossed one day we go on and win it again.

“We’ll always be there or thereabouts.”

Victory for Liverpool on Tuesday evening would take them to nine points, with PSG and Napoli playing later in the night and on four and five respectively.

A draw would be the perfect result in Naples, with a trip to Paris to come for the Reds before they host Carlo Ancelotti’s side in Gameweek 6.