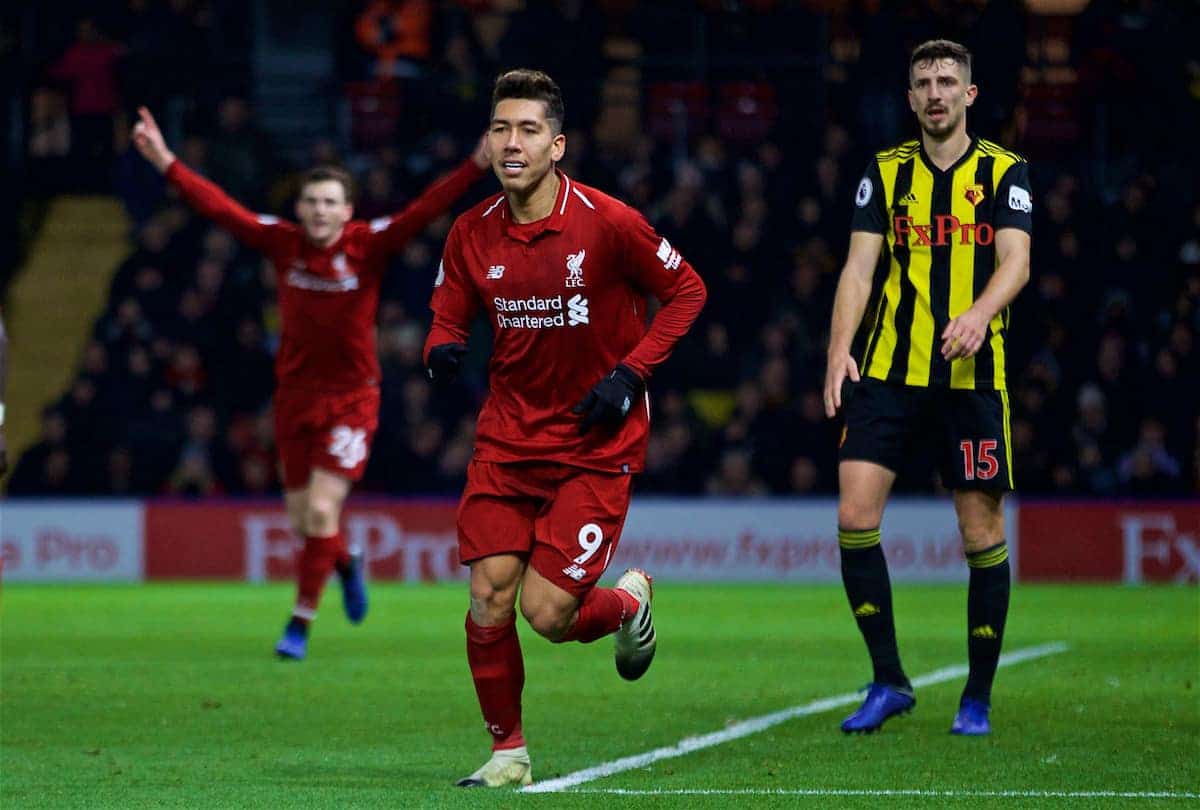 Liverpool’s 3-0 win over Watford saw a number of individuals shine, but who did the watching media rate the highest?

Jurgen Klopp‘s side maintained their excellent start to the Premier League season on Saturday, getting the better of an awkward Watford outfit.

The victory also means it’s 13 matches unbeaten and 33 points racked up – the most ever at this stage of a Premier League by the Merseysiders.

Mohamed Salah, Trent Alexander-Arnold and Roberto Firmino got the goals at Vicarage Road, with Liverpool grinding out the victory after a frustrating opening three-quarters of the game.

It was the latest in what feels like a long list of testing but ultimately positive away fixtures in the league, as the Reds’ title credentials were again on display.

Below, we compare our player ratings with those produced by the Liverpool Echo, the Mirror, Sky Sports, ESPN, The Anfield Wrap, FotMob and the TIA readers. 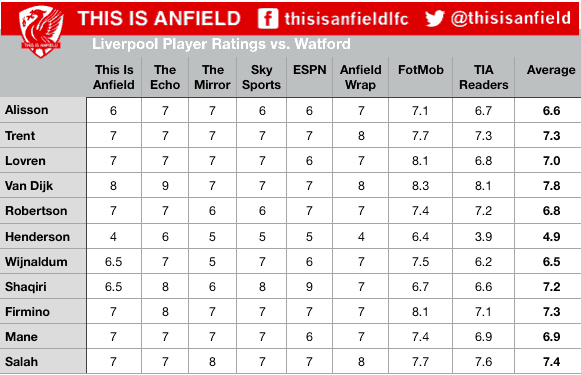 It was no surprise to see Virgil van Dijk (7.8) earning many plaudits and get the top average rating, following another Man of the Match performance.

This is Anfield’s Joel Rabinowitz felt he was “always in control against the physicality of Troy Deeney”, while the Mirror‘s Mark Jones correctly stated that “the way he glides through these games with a minimum of fuss is basically what allows Liverpool to stay so calm in them.”

Alexander-Arnold’s (7.3) sublime free-kick was his second goal in as many appearances for club and country, and it should be a huge confidence boost to the youngster.

ESPN‘s Glenn Price thought he “did well” in a defensive sense, with Xherdan Shaqiri (7.2) not always offering too much defensive cover.

The Swiss yet again showed what a good signing he will be, though, with Price labelling him as the “best performer on the pitch”.

Salah (7.4) netted his ninth strike of the season, as the goals begin to flow at a more regular rate again.

Only Van Dijk earned a higher average on the day and the Liverpool Echo‘s Ian Doyle felt his speed was a “constant threat”.

There was only one player who stood out for all the wrong reasons at Vicarage Road – Jordan Henderson (4.9).

Liverpool’s captain never got up to speed with the game and his afternoon was summed up by a needless red card late in the day.

He was comfortably the lowest-rated Reds player, with The Anfield Wrap’s Ben Johnson summing up all of our thoughts by saying, “if the game had gone the other way he might have been strangled, and rightly f*****g so.”

A win against the Ligue 1 champions would take Liverpool into the knockout stages.