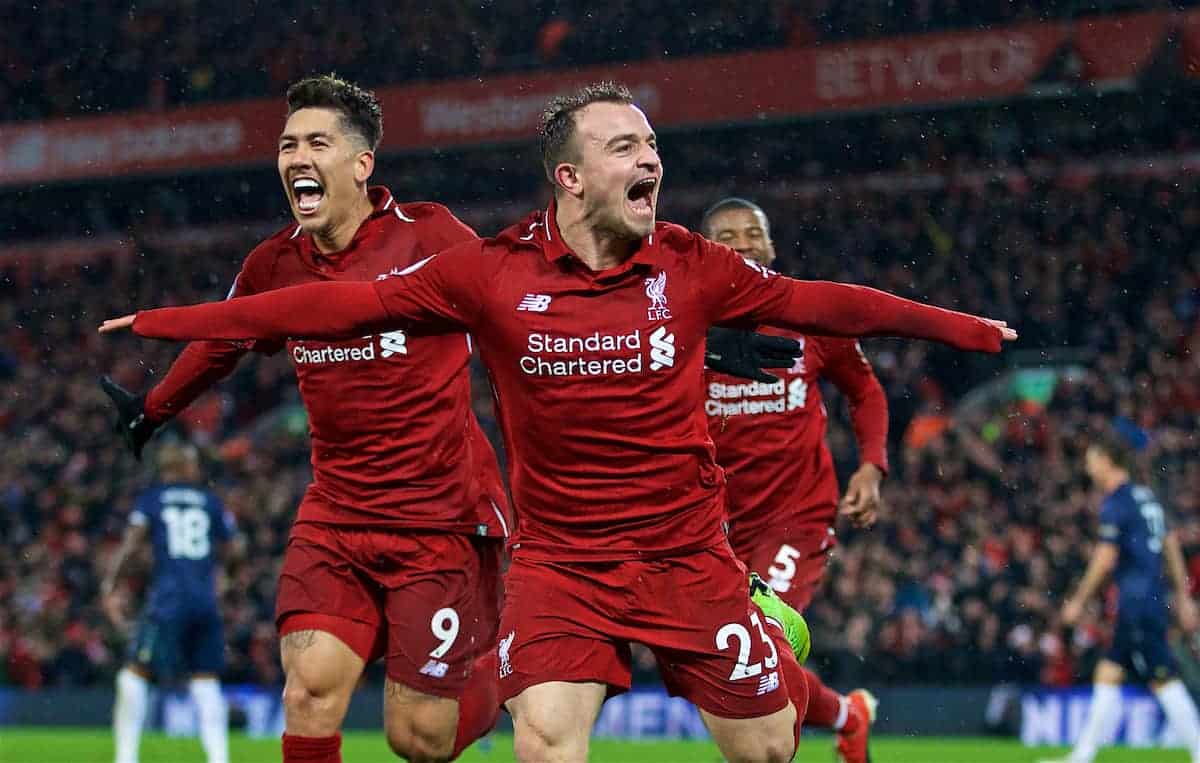 An inspired substitution secured Liverpool a 3-1 victory over Manchester United and fans were understandably delighted as the unbeaten streak continued.

Liverpool headed into the clash against Man United brimming with confidence after securing progression to the knockout stages of the Champions League in midweek, off the back of three Premier League wins on the spin.

Jurgen Klopp‘s men were the standouts in a frantic opening to proceedings and rightly secured the lead through Sadio Mane, only for a rare clanger from Alisson to take the sting out of the game heading into the break.

With United set-up to frustrate after the break, Klopp looked to Xherdan Shaqiri midway through the second half to turn the game back in the Reds’ favour—and he duly obliged.

The Swiss attacker scored four minutes after his entrance and followed that strike up with another only eight minutes later, to put the game to bed and take Liverpool back to the top of the table.

THE POWER OF THE CUBE COMPELS YOU

“Shaq is scoring all around us, there are kopites having fun its only December and your 19 points behind us, merry Xmas special one…..” Dave Manktelow on Facebook.

Oh Xherdan when you score like that,
You make United go mad.
So be wise and keep on,
Scoring twice against Man U
Shaqiri Shaqiri.

How long we have waited for such an impact sub like Shaqiri in our bench. It has been years.

Xherdan Shaqiri was brought on to be progressive and decisive – and he has done exactly that since his introduction. Brilliant work from Sadio Mane in the build-up and Shaq's effort deflects off Ashley Young and is in off the crossbar. #LFC 2-1 #MUFC

I'm getting a Shaqiri 23 for Christmas. It's settled.

“Xherdan Shaqiri, master of the deflected shot.” – El Dorado
on the forums.

SHAQIRI! An absolute bargain for Liverpool and what a game changer he has proven to be.

Shaq has been another incredible Michael Edwards signing. When you factor in talent, age and fee its close to a 10/10 #LFC

Fabinho's first assist for Liverpool – had only created five chances for the club prior to that.

Fabinho, though, was by far and away MOTM. An absolutely colossal performance

“Fabinho‘s gone from gear 1 to gear 100 since being gradually introduced into the team. His passes will be key for mane/salah’s pacey runs.” – Saravana Manickam > on Facebook.

Fabinho has been brilliant.

Fabinho MOTM for me tonight. Broke up the play well to stop United stringing any passes together in midfield. Vision & weight of pass for Mane’s goal impeccable. Possesses the perfect combination of defensive resilience and forward ingenuity.

Brilliant, brilliant pass from Fabinho that. Excellent vision and what about the run and composure from Mané.#LFC #LIVMUN

“Fabinho has been world class tonight.”
– Neukolln on the forums.

Forget allegiances to any players in the squad. If you don’t see what Fabinho brings you don’t understand football

Fabinho with some half there too. A DM that exposes space and can pass. Hallelujah. #LFC

Of course Alisson does that after all of the articles done this week as well. Bound to happen.

He does more right than wrong but that’s a real clanger from the keeper, it’s back level. And very quiet.

Excellent half on the whole but started over playing too much as it went on. Dreadful error from Alisson.

Was only a matter of time before Alisson got an assist.

So far this season Alisson has saved us 8-10 points with his crucial saves, this is his first mistake which is hanging in the balance. It’s time for our attack to bail him in the 2nd half for the first time.

…But overall, fans were quick to praise the performance as Liverpool’s juggernaut failed to show any signs of stopping

Deserved win for LFC. Dominated ever area of the game. Back to the top of the league ??

What a win. Delighted the players bailed out Alisson after he's bailed them out numerous times in recent weeks. Showed exactly how big the gap is between them and United these days. Tremendous performance and result.

“That was bloody lovely.. We played some excellent football.. Got some bits of luck but so did they, didnt deserve their goal. Utterly dominated.

Big mention to Clyne who came in and bar 1 small error was immense. Everyone else was class.

United are truly mid-table. Long may it continue.” – Iluvatar on the forums.

It would have been a crime against football if Liverpool didn’t win that. Total dominance.

Fabinho deserves that win more than anymore. What a performance.

Beating United to go back to the top of the league. If Carlsberg did Sunday’s….#LFC #LIVMAN

Very much a dominant performance from the Reds. Let the equaliser affect them (crowd and players) more than it should have to be honest. More than it would have if it was Wolves or West Ham, who are within a point of United.

FT: #LFC 3 United 1: Super sub Shaqiri the hero with a match-winning double after Lingard had cancelled out Mane's opener. Liverpool return to the top of the PL table after their first league win over United at Anfield since 2013. Fully deserved.

“This was high octane stuff. Good stuff from everyone.
Robbo and mane were brilliant.
Fabinho was a colossal octopus today.”
– indianscouser on the forums.