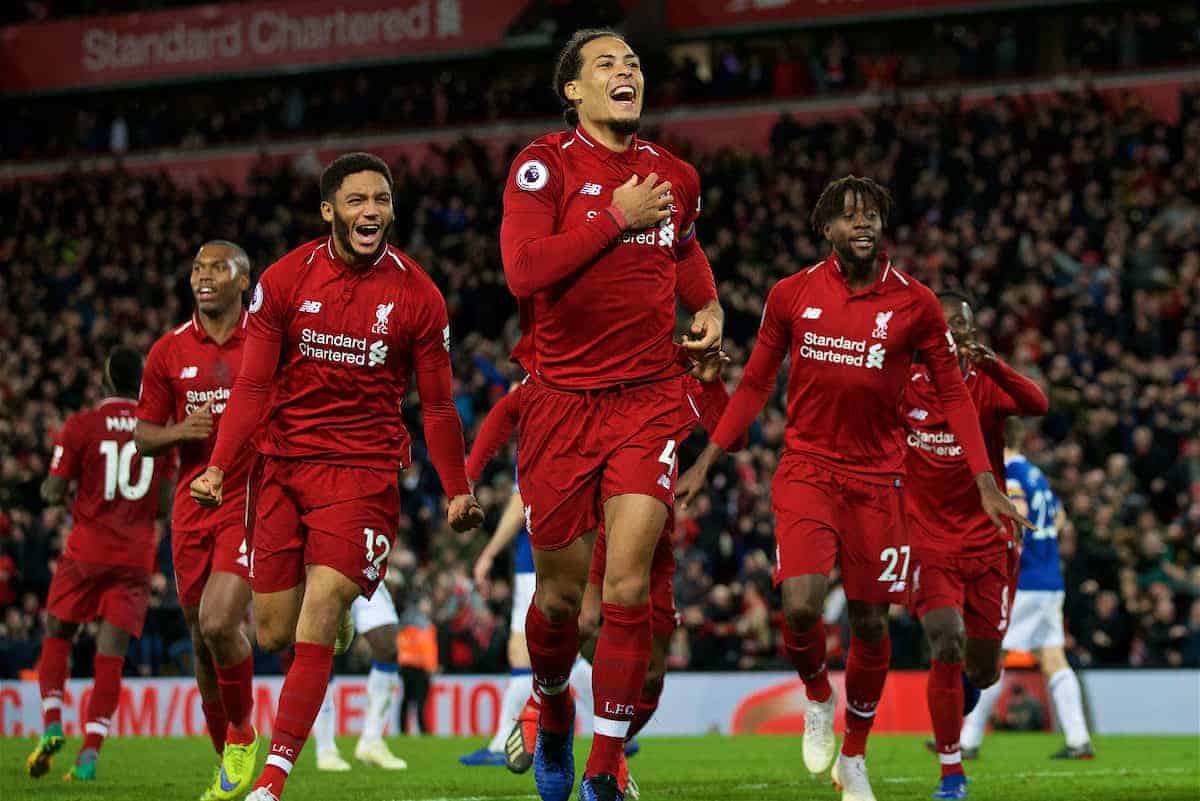 Divock Origi was the hero for Liverpool after heading home in the dying stages to seal a dramatic 1-0 win over Everton on Sunday, leaving supporters ecstatic.

A return to Premier League action saw Liverpool come to blows with fierce rivals Everton in a bid to keep Man City within striking range at the top of the table.

And they managed to do so despite leaving it until the last moment to seal a crucial three points.

An end-to-end first half saw a plethora of opportunities fall to both sides to hit the front, but top-notch saves and a lack of composure with the final ball ensured the deadlock remained heading into the break.

With frustration starting to boil over as the scores remained level and the minutes ticked by it was not until Divock Origi capitalised on a defensive lapse to send Anfield into utter euphoria.

GIVE ORIGI A STATUE

Genuinely didn't think I could see a better ending to a derby after the 95th minute Mane winner in Goodison. But this has completely blown that apart.

I love this football club.

I thought Mane 90+4 wouldn't be bettered any time soon, but that has just topped it. There simply is no better way to win a Derby.

What a moment for Divock Origi. The unlikeliest of derby heroes. #LFC

Fans were thrilled with Alisson and Gomez’s goal-line heroics…

Magnificent from Alisson and Gomez. That’s where bonds, understanding and trust are built between keeper and defenders, incidents like that. Gomez won’t need to wash himself in the showers if they keep a clean.

Superb save by a £60m goalkeeper. Superb clearance off the line by a £600m defender.

Oh, and Alisson Becker is a fucking demigod.

For as great as Virgil has been and deserves all the plaudits, it was fitting that Alisson and Gomez combined for some sensational blocks and clearances to keep that 0-0 on Gomes. Both of them are every bit as vital to our side.

World class by both Alisson and Gomez!

It’s a tale of two Brazilians, Fabinho is playing well while Firmino seems to struggle

“Bobby is a shadow of the Bobby we all know.”

One question. Why has Fabinho not played earlier? He's providing what #LFC have been desperately missing.

Still not a fan of Firmino dropping right back to the halfway line. Such a crucial cog last season but he’s had minimal influence here. Saw the value in getting him higher up the pitch last weekend vs Watford – needs to be done again.

“Bobby Firmino, would love to have the real you back sometime.”

“Why is Klopp so stubborn in keeping Firmino in the No. 10 role? Firmino isn’t a No. 10 he is a striker, without him in the box Robbo and TAA can’t whip any crosses in as there is no one to attack it. Put Bobby upfront, Salah out to the right and Shaqiri in the No. 10 role.”

Fabinho's quality all over that big chance. Called it a long time ago, he will be key to counter pressing chances.

“Fabinho has looked excellent and hopefully he’ll get a run in the side.”

Firmino doesn't suit dropping all the way back next to Fabinho to pick up the ball, leaves a huge space with no-one to pick it up and the flow breaks down and ends up passing backwards. Not even a shadow of last season.

This type of football won't last all season

Liverpool’s set-piece delivery left a lot to be desired…

Set pieces have been so, so wasteful of late. Vast majority badly underhit and cleared by the first defender. Need to make more of these situations.

Liverpool's set-piece delivery this afternoon has been horrific.

“Taking a decent corner is a dying art nowadays!!”

It was an important and confidence boosting victory…

That’s a very different Everton side. Played their part in an excellent game. Top manager too. Huge win today ??

“Amazing game from start to finish! 3pts is all that matters! C’mon Reds!!”

“Brilliant win by the lads. Everton gave us a good game.”

Only my club can frustrate me with our front 3 not scoring, waiting 90+6 stoppage time only for Liverpool’s most forgotten man coming on for his first PL appearance to score in the final minute, and my manager running on the pitch to celebrate with Alisson. I love this club.