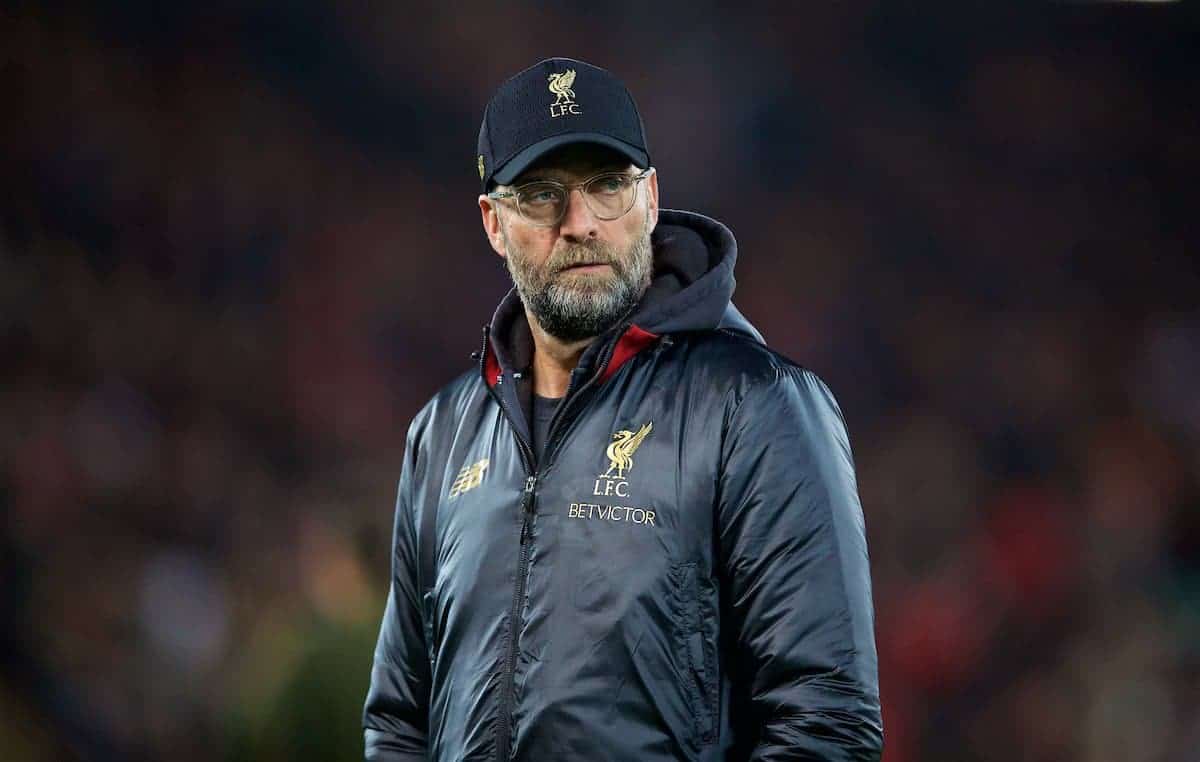 Liverpool manager Jurgen Klopp insists the Premier League table counts for nothing when his side head into battle against title rivals Manchester City on Thursday.

A 5-1 win over Arsenal extended their lead at the top to nine points from Tottenham, although third-placed City have a chance to reduce that to seven if they win at Southampton on Sunday.

The numbers mean little to Klopp, however, who is focusing on the game which lies ahead at the Etihad Stadium.

“What do you think? When we went to City last year, do you think I had the table in the dressing room and said, ‘We are fourth, they are first?’” he said.

“It’s just not important. We wanted to win the game, which we obviously didn’t do (they lost 5-0 after Sadio Mane was sent off in the first half), but we wanted to win it that day and I think everyone who remembers it saw that.

“The only thing that has changed is that you all ask about it, that’s all. It’s not a problem, you can ask what you want.

“We go to City not with whatever-point distance, we only go there to try to play the best football game we can play: 100 per cent.”

Victory over Arsenal, achieved thanks to a first Liverpool hat-trick from Roberto Firmino and goals from Mohamed Salah and Mane after Ainsley Maitland-Niles had given the visitors an early lead made it nine successive league wins.

They extended their unbeaten start to 20 matches and the 54 points from 20 league matches – 16 more than they had at the same stage a year ago – is the best start to a season in their history.

Despite all the good news Klopp is trying to keep things in perspective.

“I don’t think I am famous for not being a positive person. From time to time, even I enjoy life,” he added.

“When we came into the season the thing was if we can qualify for a third time for a Champions League spot then that would be brilliant.

“Now we have quite a distance between that, but do I feel that’s already done? No. Sorry, I cannot feel it.

“I’ve learned in sports like this that you think about the next step and not the next, next step. We don’t do that.

“The fans think we are in good shape and it would be crazy if they didn’t think we are not in a good moment, absolutely crazy.

“A few of them obviously have holiday at this time of year, so maybe New Year’s Eve will be a bit louder in Liverpool – hopefully not too loud because my dog doesn’t like it!

“Enjoy it and do whatever you do, but be ready again on January 3. That’s all I am asking.”

Arsenal have now won just one of the last five matches after putting together a 22-game unbeaten run in all competitions earlier in the season.

Manager Unai Emery accepts some work needs to be done on their structure.

“Defensively we need to be stronger, to work,” he said.

“Our defensive moments in our box is my responsibility and then we need the balance. We need to keep the balance in the middle.

“We need to be serious and continue on Tuesday with a big match at the Emirates (against Fulham).

“We need to show our supporters there we are standing up after the result.”