Liverpool manager Jurgen Klopp insists his side go into their must-win Champions League encounter at home to Napoli not fearful of conceding but well aware of the implications.

After losing three away matches in their group for the first time, the Reds have to beat their visitors 1-0 or by two clear goals to qualify for the knockout stage.

“You don’t have a situation like this 20 times in your career, that’s why I think it makes sense that our approach before a game will be completely normal,” he said.

“We don’t want to concede always, that’s how it is, and we want to win, that is also how it is. The rest we will see during the game.

“We need to be really active, very focused, very in the game but it’s not that we are afraid of conceding goals before the game starts.

“They (Napoli) should have to work very hard for any chance and then we still have the opportunity to save it. And on the other side, we have to score.”

Liverpool have kept 14 clean sheets in their last 18 home matches in all competitions and have scored in 10 of their home meetings against Italian opposition – with Roma in 2001 the only team to keep them at bay.

Klopp’s side are better set up now to win 1-0 than arguably at any time in the last decade but the margins are so small it is not a result which Klopp intends to rely on.

“If they score we then have to score a second and a third and that is a very hard job to do. We knew that already. Now we have to do the job.

“It is a mix of being really lively, and making an emotional game of it – it must be – and on the other side being really closed at the back so nothing happens there.

“That is a big job to do but the boys have played many times and pretty good as well. We know how to be solid and be active.” 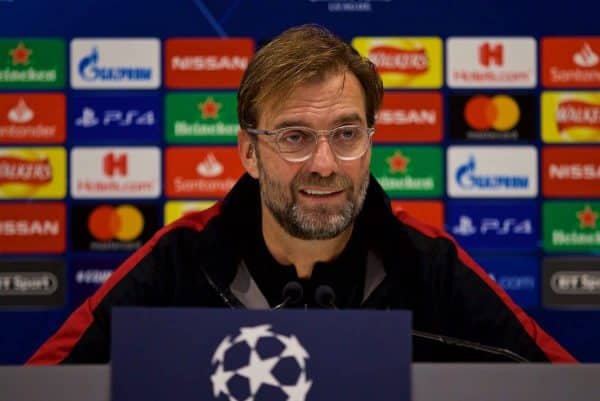 Klopp is not contemplating an exit at the group stage but insists they will not use it as an excuse for confidence to drop should they not make it.

“If we speak about it and we are not a Champions League club in January/February it will not be one second an excuse for anything else,” he said.

“If we play Europa League or not even that – which is possible – that is all.

“We do not need to make it any bigger than it is, but it is big. That is exactly how we want to take it, as an opportunity for us (to) stay in the competition.

“The boys, I know, are desperate to stay in the competition.

“If we don’t win as we have to and we lose confidence, that is our responsibility.

“If after the campaign in the Premier League (where they are the only remaining unbeaten side), so far we don’t have confidence after losing one game that will be really bad.

“What we have learned so far is we work really hard and we are difficult to play.

“It is not a joy to play us and we are a constant threat. If we lose that in one game…I cannot believe that will happen.”