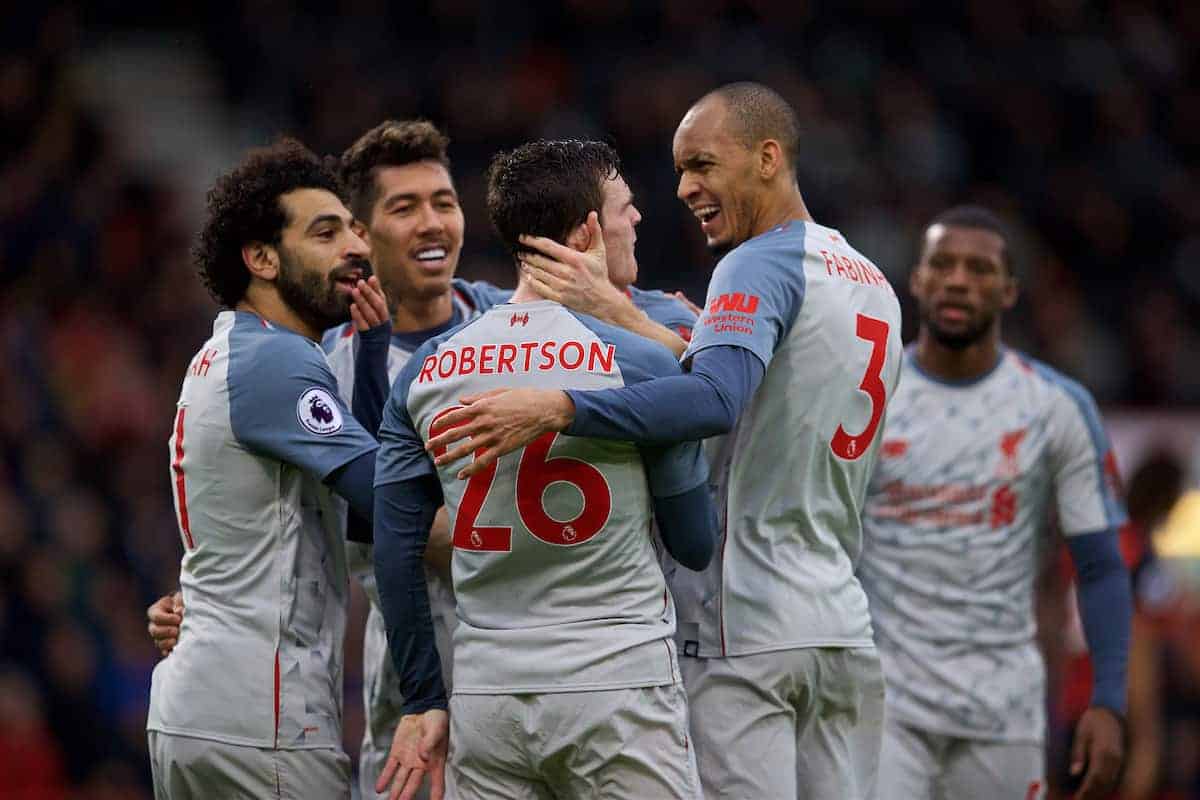 A sensational hat-trick from Mohamed Salah paved the way for a convincing 4-0 win at Bournemouth, and fans were thrilled as the Reds moved to the top of the table.

Liverpool travelled to the south coast with the opportunity to move to the top of the Premier League with a victory prior to Man City‘s game on Saturday evening, and it was one the Reds did not pass up.

While Bournemouth proved a tough proposition, a clinical Mohamed Salah left no doubt as to where the three points were headed at the end of the 90 minutes after first punishing Asmir Begovic on the rebound before expertly finding the bottom corner early in the second term.

Following an own goal from Steve Cook, the Egyptian then added insult to injury as his brace soon became a hat-trick.

It was a result which saw Liverpool stretch their unbeaten run in the league to 16 games and send Jurgen Klopp‘s men to the Premier League summit.

Salah ran the show as his stunning goal-scoring feats continued…

Mo Salah's hat-trick is the 50th ever scored by a @LFC player away from home in league football.

Salah that is superb. How many players bottle that? Lash it hard, or search for a pass to avoid embarrassment? Elite. #LFC

“That was cruel by Salah, looked like he was playing against kids in the park.”
– basil1492 on the forums.

The one season wonder scores a beauty. Great stuff from @MoSalah

The composure from Salah there was just ridiculous.

“Mo – Ruthless/clinical – and he just keeps going even when they try to hack him down.” – BostonMick on the forums.

Salah is just WOW!! 4-0! Hat trick!! And he is just having fun with the defenders now ??Absolute brilliant @MoSalah

Salah’s best game of the season this

Salah refuses to take the MOTM award in his post-match interview and gives it to Milner for his ‘amazing career’ after his 500th appearance. Class act.

So hyped for a Fabinho and Naby Keita midfield partnership ?#LFC #BOULIV

Fabinho and Keita are running riot

“Fabinho is an octopus. It’s as if he has 8 legs. Perfect no.6 imo.”
– indianscouser on the forums.

Delighted for Fabihno and Naby. Been a long time coming for them that. #LFC

“Bit of a bad ass our Fabinho. Anyone else think he could get a part in Sicario 3?” – theres always tommorrow on the forums.

How long will it before we start calling Keïta ‘Nutmeg Naby’ ? Insane skill. Turning defenders into human croquet gates. #LFC

Has Naby got a string attached to the ball?

We’ve been absolutely fantastic here against a really good Bournemouth side. We’re getting there. Keita and Fabinho finding their feet is massive. ???

Front to back, it was the Reds’ most complete performance to date…

Quite possibly the most complete, dominant 90 Liverpool have put together this season. Total control from the off, passed the ball with purpose and pressed with intensity throughout, while attacking with a real cutting edge. This Bournemouth side are no mugs, either.

Ruthlessly clinical Liverpool. One of the most efficient performances for a long while. Robertson delivery first rate, Alisson an island as per. Klopp couldn’t have asked for more. Over to City. #LFCdigest

“Brilliant today Liverpool.that’s more like it..great defensively…meaty tackles…even the pressing is back..salah on another level when he plays like this and fabinho is just an immense beast.”
–
Paul Hemnell on Facebook.

The best thing about this #LFC performance is that Bournemouth were quite good for long stretches. Only relented after third goal.

“Well this has been a brilliant performance today. Very, very impressive.”
– Caradoc on the forums.

Alisson’s header is one of the moments of the season.

“Calm, collective and professional performance against a decent side.
Salah clicking into gears, bit of luck but the 2nd two were classic Salah.

They sometimes say it takes a moment to start you on the path to something special.. Was Origi’s goal that.. Top of the League!!”
– Iluvatar on the forums.

Best performance of the season from the top of the league Reds!

Up the ‘top of the table’ Reds…

TOP OF THE LEAGUE

Over to you Man City. We’ve shown we can keep our bottle being 5 behind playing our game in hand. City facing a wounded Chelsea who will be looking to get back to winning.”
– rupzzz on the forums.

What a time to be a Red! Top of the league, best start ever in 126 seasons,undefeated in all 16 league games, conceding just 6 goals & 10 clean sheets, squad depth in all areas,1 season wonder Mo Salah joint top scorer & we haven't even got out of 1st gear yet.Up the Reds! #LFC

Some performance from #LFC to go top of the table. Salah sublime, but solidly supported by Firmino, and the spine of the side was excellent. Over to you, City….