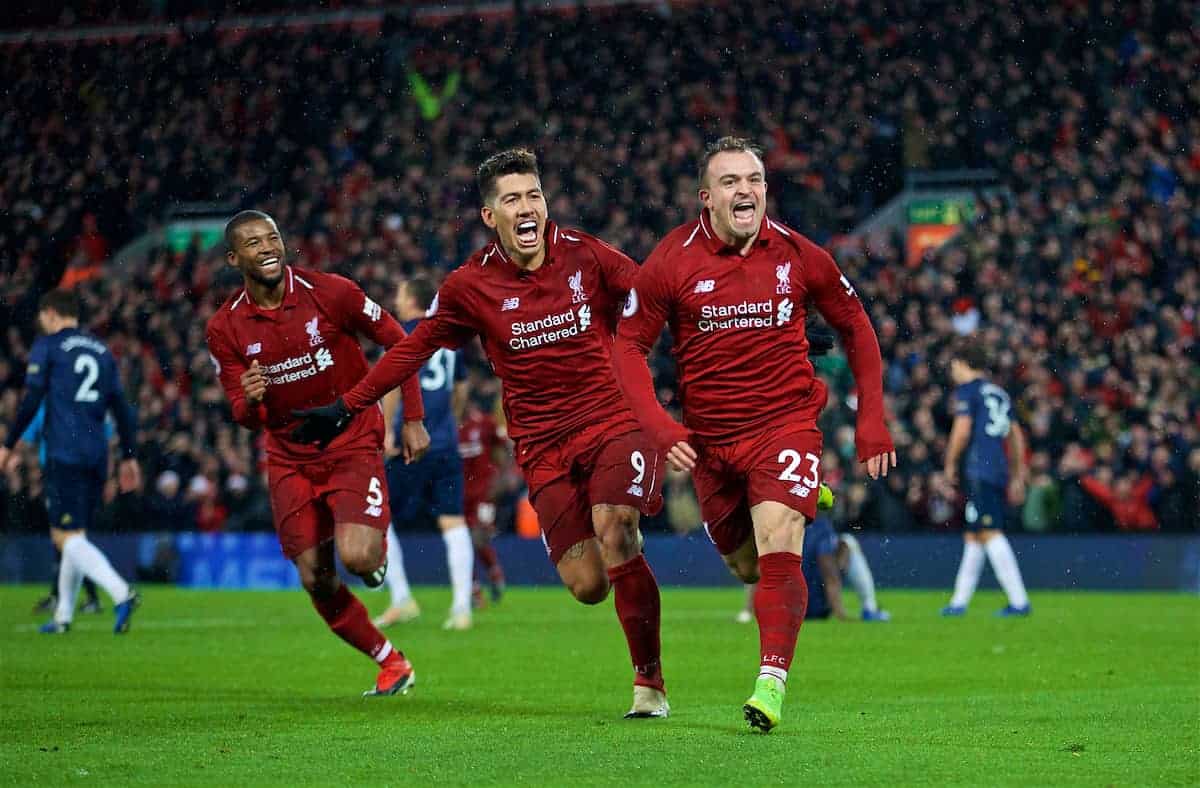 Liverpool players were quick to praise the efforts of Xherdan Shaqiri and the overall performance from both team-mates and fans, following the 3-1 victory over Manchester United.

A tightly contested battle at the top of the Premier League with Manchester City ensured Liverpool headed into the meeting at Anfield knowing only three points would restore their place as league leaders.

The opening exchanges went in the way of the Reds as a relentless wave of pressure had Man United teetering on the brink and Jurgen Klopp’s men on the cusp of breaking the dam wall.

Sadio Mane was the man to nudge Liverpool ahead after a sumptuous delivery from Fabinho, only for a blunder from Alisson to gift the visitors an equaliser and take the wind out of the Reds’ sails.

It paved the way for a temporary air of frustration to cloud over Anfield, as United’s antics took centre stage, up until Xherdan Shaqiri entered the field of play and found the back of the net twice in the space of seven minutes. 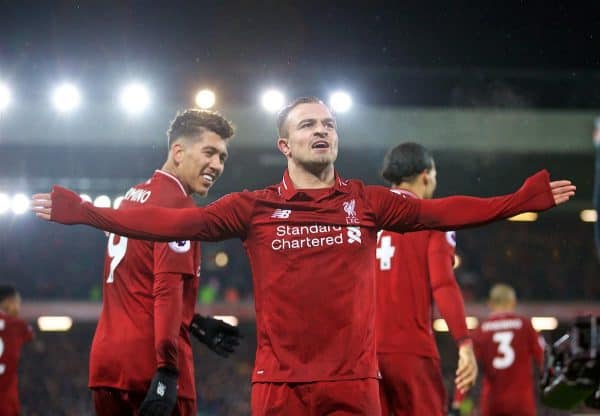 The victory maintained Liverpool’s record-breaking start to the season and, for Shaqiri, the importance of the result was not lost on him as he explained to LFCTV the need to continue in the same vein.

“It was an amazing win and important, too. We played very well. In the second half, we did more than Manchester United – we tried and tried. In the end, we fully deserved to win this game.

“When you see the statistics, we did everything in this game to win. It was very intense and we kept the high intensity in this game. It was an important win and a nice win against Manchester United.

“Our start to the season is amazing—a record in the club’s history. But we have to keep going, we have to take it game by game.

After again proving his game-changing abilities, Shaqiri was the name on many lips following the clash.

Virgil van Dijk was no different, heaping praise on his “fantastic” team-mate to LFCTV, while echoing Shaqiri’s sentiment that there is still a long road ahead.

“In the end, big Shaq’s coming on and he’s doing a job for us. He’s a fantastic player and he showed it already since the first game against Man United in America and he offers something different to what we don’t have and sometimes that’s a game-changer, today it was.

“[The atmosphere] was special obviously and it was a long time ago that we won against them at home so we wanted to make it right and show everyone that we’re doing pretty well.

“We’re in a good way, but we’ve still got nothing. We need to keep going and take the positive notes out of everything and things that could go better and analyse them and make sure we are ready for Wolves.”

Andy Robertson followed a similar trend, but also humorously pointed out there is improvement to be made in the corner delivery department:

After his introduction altered the course of the game, Shaqiri was aptly celebrated by both Roberto Firmino and Simon Mignolet, and the man himself:

The win ensures Jurgen Klopp‘s Reds maintain the bounce in their step after extending their winning streak to five games in all competitions.

That feel-good factor will need to be carried over to the meeting with Wolves on Friday, as the fixtures continue to come thick and fast.