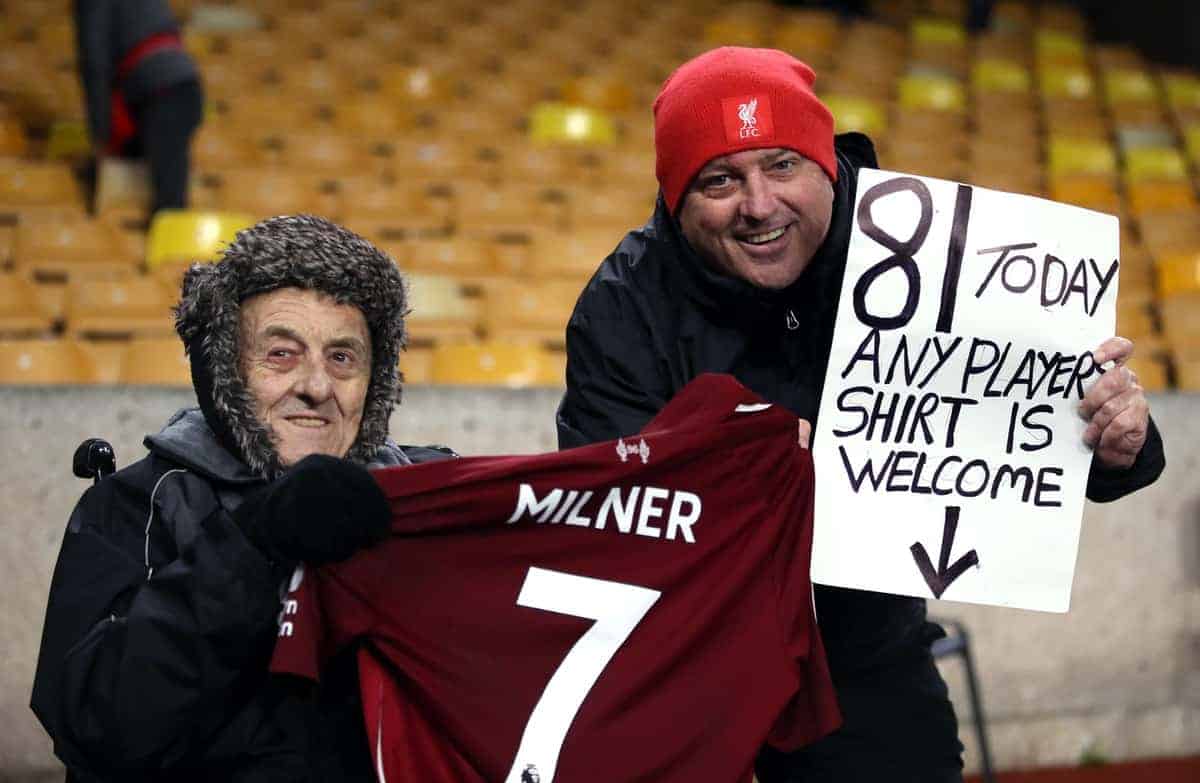 After Liverpool’s 2-0 win over Wolves, James Milner gave his shirt to two young fans at Molineux, and their response has led to widespread praise for the pair.

The Reds ensured their status as Premier League leaders as goals from Mohamed Salah and Virgil van Dijk secured the three points in the West Midlands.

Milner played the full 90 minutes in a makeshift role as right-back, with Nathaniel Clyne deemed only fit enough for the bench after lasting the whole of Sunday’s 3-1 victory over Man United in his first outing since September.

With this the last game before Christmas, it was the perfect result for the travelling fans, and Milner looked to reward two of those to make the trip to Molineux at full-time.

But after handing his shirt to supporter Paul Jones’ sons, they insisted a steward take it instead to a fan in a wheelchair nearby, celebrating his 81st birthday:

Really appreciate @JamesMilner coming over to try and give his shirt to my boys tonight, but even more proud that they said to the steward to give to the lad in the wheelchair in front of us instead ?? pic.twitter.com/ZJeNTSBtdb

“Really appreciate James Milner coming over to try and give his shirt to my boys tonight,” Jones wrote on Twitter.

“But even more proud that they said to the steward to give to the lad in the wheelchair in front of us instead.”

Given their age and the obvious excitement of being handed a player’s shirt, this is a remarkable gesture from Jones’ sons, and Liverpool’s head of club and supporter liaison Tony Barrett reflected this on Saturday morning:

1/2 This is brilliant by the way. Two kids turning a player’s shirt down because they think there’s someone more deserving than they are. https://t.co/zT0p9UNDra

2/2 And this was who they thought was more deserving. Happy 81st birthday ?? pic.twitter.com/3yM0ZhKMR7

At this time of the year, this is a fitting reminder of the generosity of Reds fans, who in recent months have shown considerable support for Sean Cox after he suffered life-changing injuries outside Anfield in April.

And the continued donations to food banks in the city shows the spirit among those who follow Jurgen Klopp‘s side.

For Jones’ boys, their efforts are now being rewarded, with Milner acknowledging their charitable act with another of his own—along with his typical Yorkshire wit:

Great gesture from the two boys, I’ll get a couple of shirts over to you – & if you give them away as well l’ll defo get the message! ? #YNWA #merryxmas https://t.co/P3TuJedcI9

“You’ve just made two little boys very, very happy indeed. It’s nice to be nice,” Jones replied, and in this is the essence of their gesture.