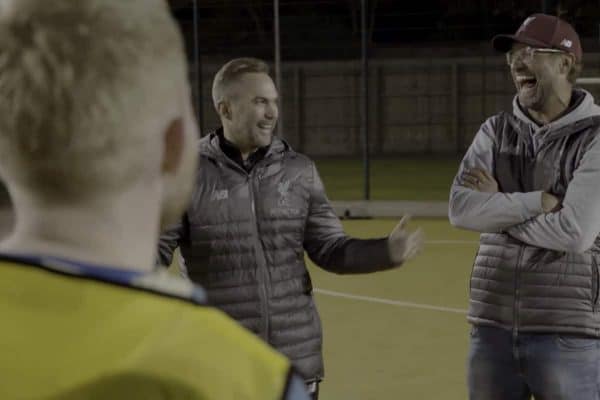 Liverpool have released a superb video of Jurgen Klopp surprising a local amateur side during a training session, as part of a new ‘Training SOS’ series.

Klopp has been a revelation ever since arriving at Anfield in October 2015, turning the Reds from an average outfit to title hopefuls and Champions League finalists.

While the German’s brilliance as a manager takes precedence, he is also an unquestionably special character off the pitch.

His charisma instantly makes him one of the most likeable figures in the game today, unless you’re Everton fans crying about him running onto the pitch to celebrate a goal!

Klopp’s lovable persona has been highlighted in a new video on the club’s official YouTube channel.

Former Reds defender Jason McAteer presents episode one of ‘Training SOS’, in which he is tasked with helping struggling amateur team Watertree West Derby Old Boys get their season back on track.

Little do the players know, Klopp tags along for the ride, making for hilarious viewing.

There are some absolute sitters on show, including one unfathomable miss from a couple of yards out, with Klopp guffawing his way through some training drills.

He pokes fun at the team’s rather weighty striker, giving his verdict on the side’s hard man and berates a couple of Everton fans.

It is yet another great watch involving Klopp and this is only the start.

The next part of ‘Training SOS’ is out soon, with the Liverpool boss inviting the players to Melwood.