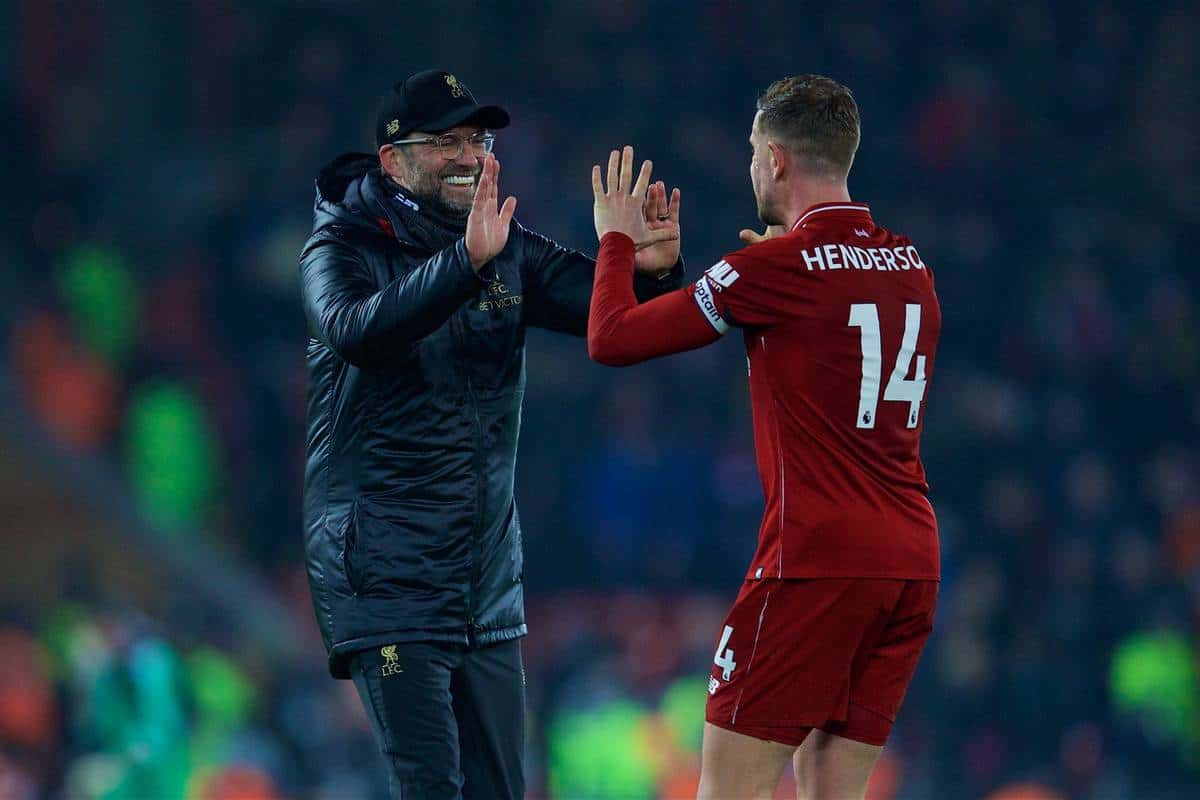 Liverpool captain Jordan Henderson admits it was crucial they found a way to win and maintain the pace in the title race on Saturday despite not being at their best.

Having conceded just 10 goals in 22 Premier League matches, Liverpool uncharacteristically shipped three at home to Crystal Palace in a chaotic 4-3 victory at Anfield.

Having been 1-0 down at half-time – despite dominating – the hosts twice bounced back to go 2-1 and 4-2 up in a manic conclusion which also saw stand-in right-back James Milner sent off for a second bookable offence.

It was the first time Jurgen Klopp’s side had conceded three in a league match since victory over Manchester City by the same scoreline a year ago and, while Henderson was not happy with the performance, he accepted the result – that briefly extended their lead at the top to seven points – was the priority.

“Every game is massive. It’s an important three points again,” he told LiverpoolFC.com.

“It was a tough game and not what we would want in terms of performance – we can be much better in controlling [the match].

“You’re not going to play as well as you’d like in every single game so when you’re not flying or playing as well as you can, it’s important to find a way to win and keep going right until the end and we managed to do that.”

“We’ll analyse the game to see what we didn’t do as well but, overall, we’ve got to be delighted again with the result.

“There are still positives to come out of it but still a lot to improve.

“It’s the Premier League, it’s tough and you need to grind results out – that’s what we did.”

Liverpool bounced back from Andros Townsend’s strike with goals from Mohamed Salah and Roberto Firmino in the opening eight minutes of the second half.

James Tomkins’ header briefly restored parity before Salah’s 50th goal in his 72nd Premier League appearance – courtesy of an error by 39-year-old goalkeeper Julian Speroni, in his first game since December 2017 – put the hosts ahead.

Having been knocked out of the FA Cup, manager Klopp is taking his squad to Dubai for some warm-weather training over the next week.

It will hopefully provide players with the right environment for recovery as Milner’s pending suspension means the Reds boss could have a problem at right-back for the visit of Leicester on January 30 if Joe Gomez (leg) or Trent Alexander-Arnold (knee) cannot be ready in time.

“We have a few knocks and injuries in the squad, so it gives them a chance to try to recover and get fit again,” added Henderson.

“We’re going to need everybody over the next few months.”

Palace manager Roy Hodgson believes the club he briefly managed in 2010 are well set to win their first title since 1990 but thinks their performance at Anfield will provide them with a wake-up call.

“It is a good place to be,” said the former England boss.

“I am pretty sure Jurgen Klopp, his staff and players realise there is a long way to go.