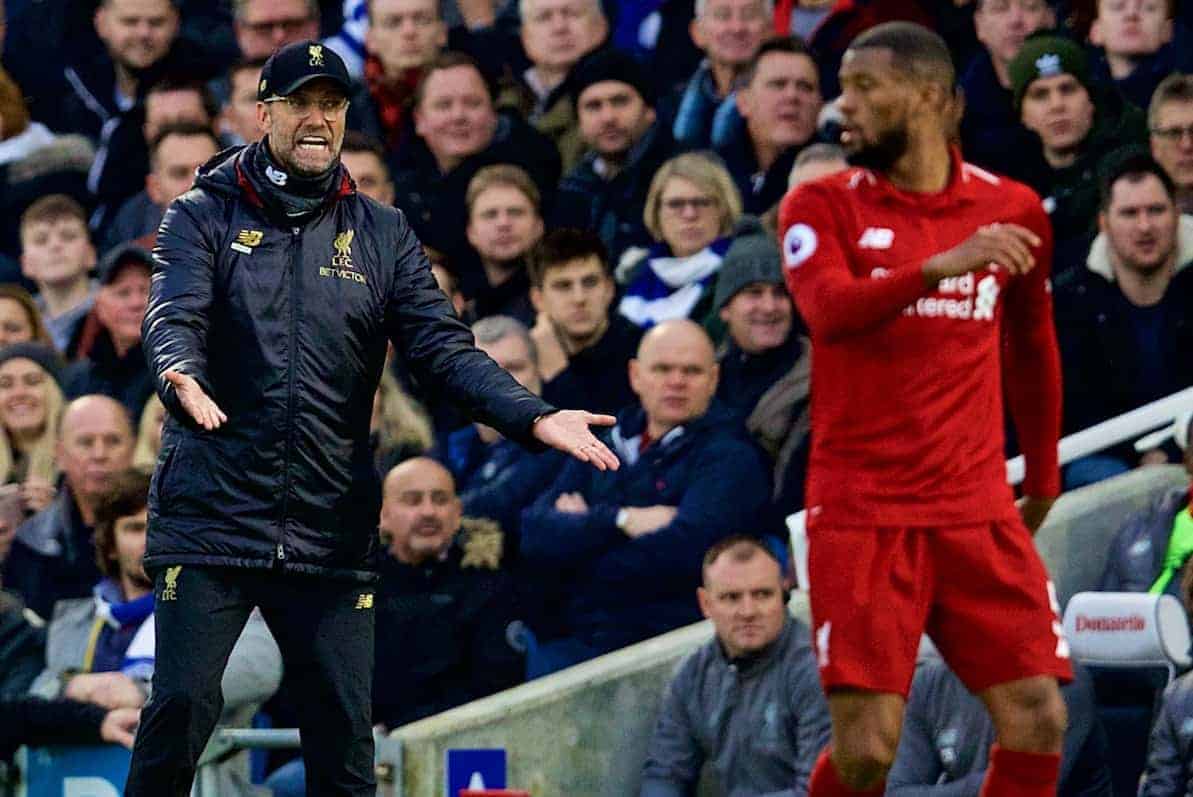 Jurgen Klopp has flirted with a return to a 4-3-3 formation in recent games, which would seemingly prove to be a popular move for Liverpool supporters.

The Reds’ staple system for the majority of last season, Klopp moved away from the 4-3-3 and onto a new-look 4-2-3-1 towards the end of 2018, after its use in the 3-0 victory over Southampton in September.

Initially utilising it in lower-risk fixtures, the 3-1 win at home to Man United in December was something of a watershed moment for this system, and in particular its key cog, Xherdan Shaqiri.

But with Shaqiri’s performance levels dropping and Naby Keita better suited to a central midfield role, Klopp has switched things up again of late, beginning in the 1-1 draw at West Ham.

There are merits for both systems, and Klopp can employ both as the rest of the campaign plays out, but there is certainly cause for debate over which is more effective.

This is Anfield asked supporters on Facebook and Twitter which is the ‘best’ formation for the Reds, with one clear favourite. 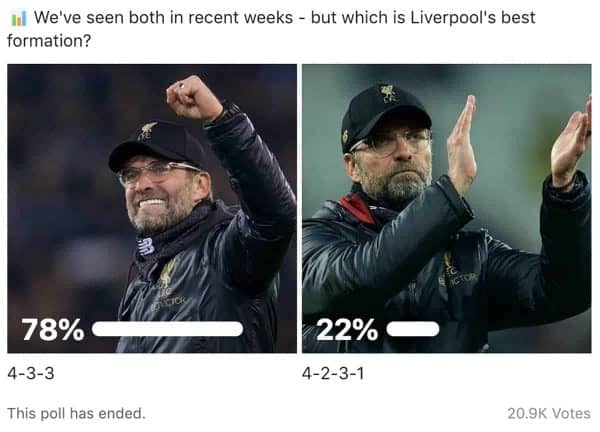 A popular line was that Klopp does not currently have the right personnel to field a 4-2-3-1, which is debatable given its efficiency earlier in the season.

“4-2-3-1 helps us defensively…but we don’t have a striker to bang in those goals. Salah is much more effective as a wing man than a striker,” Ansel Kevin argued.

“4-3-3 is ideal right now. Because it doesn’t just make Salah more influential, it also makes Bobby more useful than when he plays No. 10.

Jason Rowlands agreed, writing: “4-3-3 every time for me. Playing Firmino in the No. 10 role just doesn’t seem as effective as Firmino as a false nine.”

Interestingly, Shane Treacy offered a contrary stance, writing that “4-2-3-1 has got us in with a chance. We’ll start conceding again if we stick with 4-3-3.”

The 4-3-3 was similarly popular with the 5,878 voting on Twitter, with 74 percent opting for the previous formation over one which brought big victories over Watford, Burnley, Bournemouth, United and Newcastle in 2018.

“We play better in a 4-3-3, with Firmino up top, he offers a lot more than as a false nine,” wrote @frosa720, echoing both Kevin and Rowlands.

“[The] 4-3-3 is more balanced and gives more control, though demands a lot from the midfielders,” explained @Rageera.

“The current midfield of Fabinho, Gini and Keita is about perfect for it as all of them have the engine, quick passing and technique required. But the midfield two in some matches works well also.”

Naturally, the pragmatic approach seems best, with DanielHit58 writing that it “depends on [the] players. With Shaqiri 4-2-3-1; without him 4-3-3.”

If energy is the deciding factor with the 4-3-3, the hope will be that Liverpool return from Marbella revitalised and prepared for a big night against Bayern Munich on February 19.

After that, there is at least one more Champions League clash and 12 Premier League games to come, and the Reds will need to be flexible as they push for silverware in May.