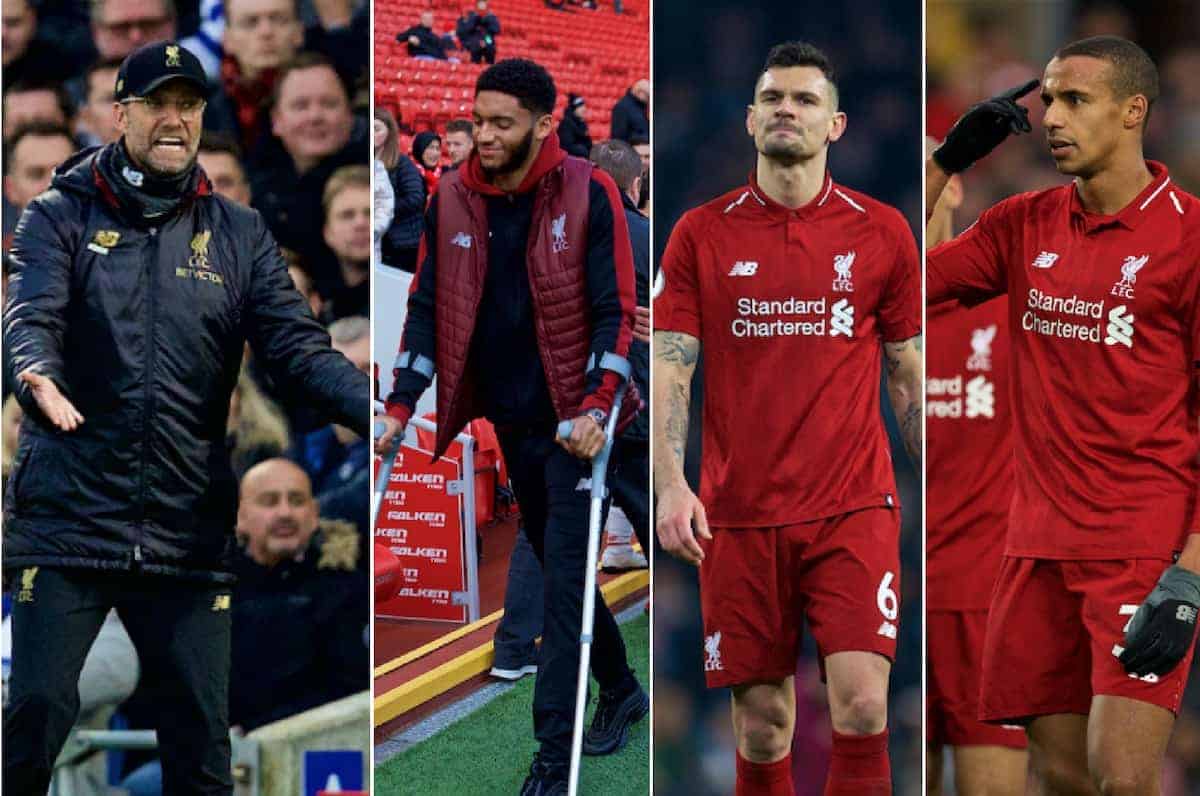 Liverpool find themselves in a troublesome situation in the injury department and supporters have been left unamused by the situation.

The news emerged on Friday that both Joe Gomez and Dejan Lovren had suffered setbacks in their respective recoveries, as the Reds’ fitness issues mount.

Gomez’s return from a broken leg may now be a long way off after it was revealed the club fear he may require surgery to heal the damage.

Lovren, meanwhile, is out of Monday’s trip to West Ham with a recurrence of a hamstring issue, as his injury-plagued career continues.

With Trent Alexander-Arnold also missing, Jurgen Klopp is down to the bare-bones in defence, as Liverpool look to secure a first-ever Premier League title.

Reds supporters have been reacting to the news on social media and our forums.

Just hope this defensive injury crisis doesn’t hurt results. This title challenge has been built on our defence, which has been struggling with the constant changes of late. Fabinho playing in midfield is crucial, so I hope he doesn’t have to be a makeshift centre back soon.

#LFC explained the reality of the Gomez injury on February 1 – the day after the January window closed.

Don’t think for one second the timing of this “news” is a coincidence.

We are in a title challenge.

We have 1 recognised right back who is young and will be coming back from a serious injury. But let’s let Clyne go to make him feel better !

We are one VVD injury away from Fabinho/ Matip ..

And now we can do nothing about it … good job! #lfc

Nat Phillips recovering from injury, due back in April. Gomez out for an extended time with no return date. Lovren presently injured. Matip's muscles don't last long until an injury. We need Fabinho starting in midfield, not CB. Hoever not ready to be a CB in a title run. Lovely. https://t.co/OiPlrIsvUG

They didn't want to reveal Gomez' injury update when transfer window was open ?

We have 4 CBs in our team and three of them are prone to injuries all the time.Bad decisions in the January transfer window by Klopp, especially when we r aiming for the title.

#LFC Injuries could cost us for the title, but to let the window go by and not look for a loan or buy a CB is ridiculous and a RB after letting Clyne go on loan. I'm struggling to make sense of this!

Genuinely, and not being negative, don't see us winning the Prem with Matip & Lovren swapping around alongside VVD. Plus no back-up for TAA if he has anymore injuries.

Look at how shaky our defence has been in the last two games.

That won't get us over the line with City.

we are in February, so if Joe Gomez needs surgery, his season is over? Klopp must stop lying to us! https://t.co/mzF7Db9w2b

A select few were more laid-back, trying to find positives…

Given our injuries and fitness issues in all centrebacks except Virgil, be thankful we have Fabinho who can play in so many positions in the back. Otherwise we would be really screwed

Two fit centre halves and an injury prone Lovren. Fabinho did look good at centre back against Brighton however

“Matip and VVD would probably have started the West Ham game anyway. Milner will come back in at RB with Fab, Gini and Hendo in midfield, it’s not quite a crisis for Monday night but it’s perilously close to becoming one if we pick up any more injuries or suspensions”. – Steve in the TIA comments section.

We will be ok, bit nervous about Bayern tho. UP THE REDS

Injuries suffered by current 4 CBs of top 6 teams since August 15-16:

Repeat after me: The greatest predictor of future injury is previous injury.
Buy more lads without injury history. Don't give lads with injury histories contracts that run to age 32/33#lfc

This just further highlights the need for the majority of Liverpool's spending to be on defenders in the summer. We simply don't have the resources to cope with a couple of injuries before we have to start playing midfielders at the back.#LFC https://t.co/22rffcDbos

“We just need to bring in less injury prone options in the summer” – Srinivas Kasturi in the TIA comments section.

“Bring in another center half in the summer and move on one of Matip or Lovren as neither have particularly good injury records or are good enough” – Sugar ray in the TIA comments section.

“We must have the most injury prone center backs in the world.” – The Infamous on the forums.

Liverpool have to be looking at CB’s next transfer window.

I don’t know that Matip, Lovren or Gomez have ever gone 20 games in a row for us without injury. Lovren has never gone longer than 6.

De Ligt or Militao being options.

Sign 2 good back ups in the summer. Can't have Matip and Lovren being the only senior back ups we have.

If Gomez needs surgery then it further shows the need to invest in a top class centre back. Him, Lovren and Matip are all too injury prone to be considered as first choice with van Dijk, need a consistent pairing at the back #LFC