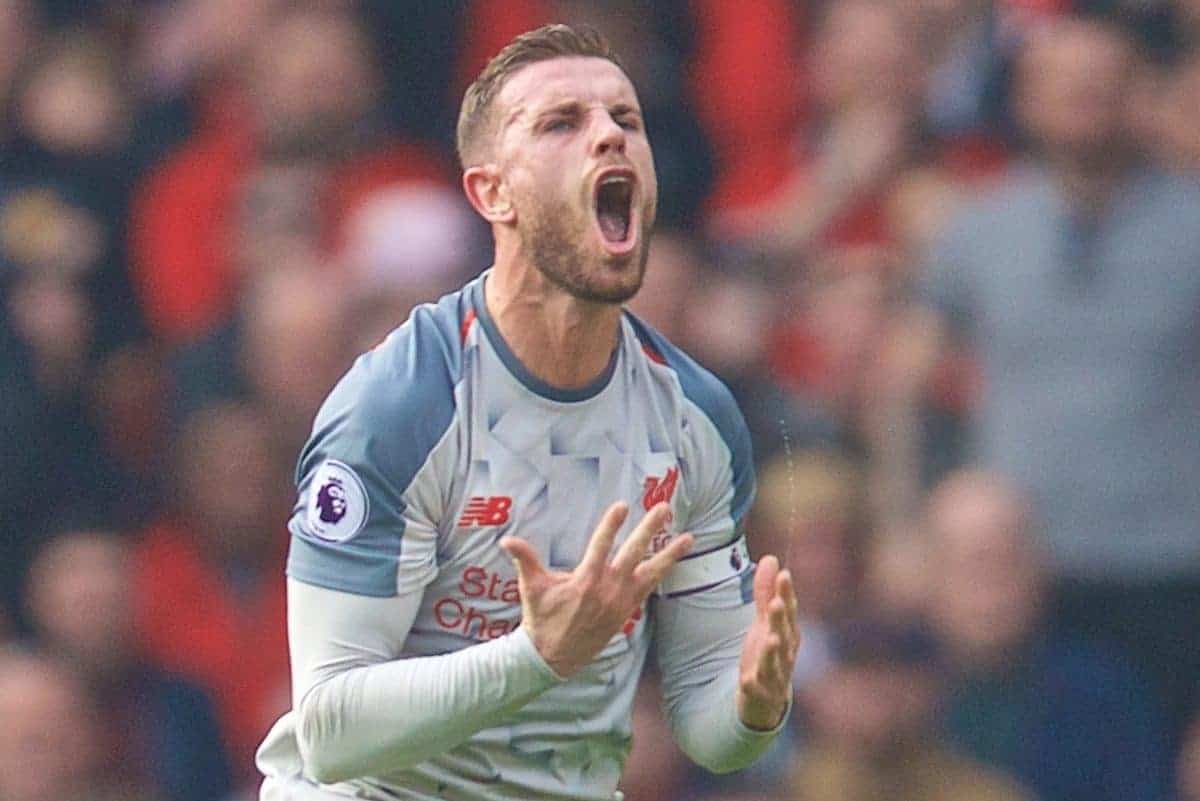 Liverpool limped to a forgettable goalless draw at Man United on Sunday, in a performance severely lacking in attacking quality.

The Reds took on their biggest adversaries at Old Trafford, looking to go three points clear of Man City at the top of the Premier League.

Jurgen Klopp‘s side struggled to find their rhythm throughout, failing to create a single chance of genuine note.

It was a disappointing result in many ways, especially given United’s injuries, but Liverpool are still top of the table with 11 games left to play.

James Milner, drafted in at right-back, had an afternoon to forget…

Klopp leaving on Milner, who has been absolutely abysmal, is the worst decision of the match.

“Hopefully, this is the last time im watching milner playing as RB” – Basha Usop on Facebook.

“Milner had a shocker” – Steven Alonso on the forums.

James Milner was only successful with three of his 17 crosses today.

He was the only #LFC player to successfully complete a cross today.

James Milner was absolutely garbage today by the way!

What is behind the average performances of the likes of Salah and Mané today? They didn’t get great service but when they had it they simply weren’t good enough. Dare I say it, nerves? Has to be a worry.

“Salah and Mane were poor today, but they have plenty of credit in the bank” – macca1970 on the forums.

Salah wasn’t even a threat.

I can't believe how bad Salah & Mane have been. Both pulling their worst performances of the season in such an important game.

The overall display was widely lambasted…

Liverpool had just one shot on target in the match, their fewest in the league since April 2017 #MUNLIV

Think that performance is a real worry. Liverpool looked so far away from the team they were at the end of last year. Part of that is down to the midfield we went with and Firmino’s injury but the front three were so lacklustre throughout.

Fabinho and the CB’s: good. The rest, wow. By the law of averages, you’d think they’d make one good decision or pass from all their attempts. Nope.

The result in isolation I can accept, but the manner of the performance is cause for concern. Far too sloppy and lacked any sort of imagination in the final third. United were the walking wounded and so it does feel like a missed opportunity.

“We won’t win the league if we keep playing this horribly.” – Phumelela Phim Sigenu on Facebook.

Dear me that was dreadful.

Nothing positive to say.

Many felt it was a huge chance missed…

One of the worst games of football I’ve seen in a long time.

Liverpool’s front three were awful. Not at it at all. All possession was far too safe.

So so poor. Of course not a bad result but that was our chance to win and really kick on. Asked for players to make a statement and hardly anyone showed up.

Who'd thought being top would hurt this much haha

We’d have all taken a point before the game. But a performance this bad does not inspire confidence. It’s still in our hands, but you can almost feel the belief flooding out of this side. Winning our last eleven will be very, very tough. And that’s what we’ll have to do.

“What a chance to go 3 points clear” – Richard I. Yanev on Facebook.

Not a single moment in that match where Liverpool looked even remotely likely to score, against a United team ravaged by injuries. Didn’t ask a single question of De Gea throughout. A point clear at the top, but a massive opportunity missed.

Given the same situation, City would have won that game. Liverpool look intimidated by being title challengers rather than emboldened – Salah particularly, who just doesn't seem to be thinking as quick as last season. Still, 0-0 at Old Trafford isn't a bad result #munliv

Honestly, we may be top the league but i’m telling you we were a better team last year. Chance missed, We HAVE to improve quickly. #LFC

Others were in more optimistic mood, with destiny still in Liverpool’s hands…

Go to Old Trafford. Play terribly. Pick up a useful point. Be at the top of the table and have a league title's destiny still effectively under your own control. Yet be immensely frustrated all the same. #lfc

Weird one that. Undoubtedly a terrible performance and a chance missed, but I'm still content with a point at Old Trafford.

Literally top of the league in late February still.

First time Liverpool have failed to score on the road in the league this season.
A better result than Liverpool usually get at Old Trafford.
And yet… that was grim. And yet… top of the league.

#LFC awful today. But we are capable of so much better. This performance won’t define the rest of our season – and the point could be very important. Klopp needs to be brave & find a way to accommodate Keita / Shaquiri or Ox in a midfield 3 to break the lines.

“Such a bad game, only positive is we didn’t lose” – Waldaz on the forums.

“A point and clean sheet at Old Trafford. A lot of us would’ve taken that before the game.” – SirBillShankly on the forums.

Impressed with the resolve and the resilience of Manchester United today. Liverpool disappointing creatively. Decent point for them, though.

That is, ultimately, a good result for Liverpool. Top by a point, with City still to go to Old Trafford. But the circumstances couldn't have been more favourable, and they produced a performance best described as really quite bad. Funny team.

I'll take that after a poor performance. A defeat would have been disastrous but a point puts us top. Need to improve in final 3rd

We’re winning the league and you can all fuck off.