The borrowed men continue deliver the goods, with this another largely positive weekend despite some injury frustrations.

Two more could yet feature, with Liam Millar and Kamil Grabara hoping for game time at Kilmarnock and AGF Aarhus respectively on Monday night.

That meant 10 Reds played over the weekend, with Awoniyi and Allan providing the big positives with impressive performances.

Here’s what happened, starting with the goalscorer.

Awoniyi is on fire right now…

Everything the Nigerian striker touches turns to goals currently, and his hot streak continued in Mouscron’s 1-1 draw against Sint-Truiden on Sunday.

Awoniyi has single-handedly transformed Mouscron’s season since arriving, with his goals and assists lifting the team from a relegation fight to mid-table safety.

And he delivered another decisive contribution by firing an equaliser to earn his side—who ended with nine men—a point which extended the unbeaten streak to eight games.

Awoniyi hit the leveller on 33 minutes, finishing off a move he initially started by arriving in the box with perfect timing to convert a low fizzing cross from close range.

It takes the 21-year-old to seven goals—including three match-winners—in eight games, in which he has also recorded two assists.

It is an incredible run and seeing Awoniyi bounce back from a potentially confidence-ruining spell at KAA Gent so emphatically has been a joy to watch.

What a second half of the season this young man is having and who knows how far he can go. 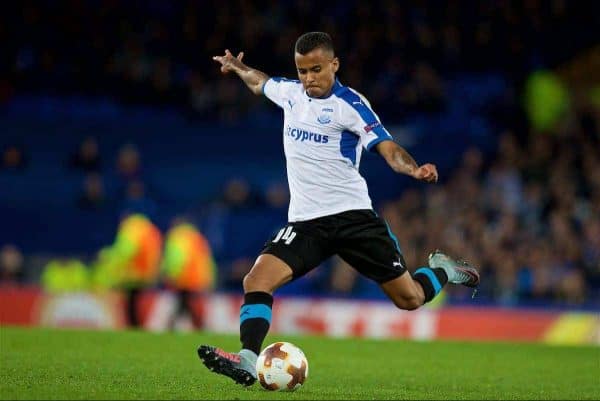 It’s been a stop-start time for the Brazilian midfielder since moving to his homeland with Fluminense for a sixth temporary spell away from Anfield.

But everything took a step forward this week, as Allan followed a bright half-hour outing on Thursday with a first start for the club on Sunday against Cabofriense.

The 22-year-old operated on the right of a midfield diamond and soon made his mark at the famous Maracana Stadium by setting up his side’s first goal in a 2-1 win.

After a cross had only been half-cleared, Allan kept the attack alive by steering a powerful header into the heart of the box where Yoni Gonzalez scored an acrobatic effort.

Completing what was a rewarding first start, Allan also played the full 90 minutes and having made a positive impact he will hope another follows next time out.

Having played all but seven minutes across eight games since joining Bournemouth, Nathaniel Clyne was rotated on Saturday, dropping to the bench against Huddersfield.

The right-back’s afternoon off was soon interrupted though, with Clyne forced to come on just before half-time due to Adam Smith suffering an injury.

The reliable defender stepped in effortlessly to help his side earn a 2-0 win, producing a typically solid display.

Following one game on the bench, Harry Wilson was back in Derby’s starting XI for two games last week, the second of those against Sheffield Wednesday on Saturday.

Wilson operated on the right flank in a 4-2-3-1 setup, but his quiet form continued before he was subbed after 72 minutes of the 1-1 draw.

No decisive contribution again means the Welshman is now without a goal or assist in his last nine appearances.

There was injury frustration for two Reds in the Football League.

Ovie Ejaria suffered another frustrating setback at Reading, as a groin problem forced him off after 36 minutes of his side’s eventual 2-2 draw with Wigan.

This latest injury is a real shame, coming just as Ejaria started to rediscover his confidence and best form. Hopefully he isn’t out for long.

Herbie Kane has also been struggling with a groin injury in recent weeks, with Doncaster manager Grant McCann having stated that the youngster will be managed carefully through it.

But Kane battled through the pain to play against Wimbledon, but understandably wasn’t at his best before being withdrawn after 68 minutes of a 2-0 defeat.

There was only one Red in action in Scotland and it was Ryan Kent, who has been in electric form for Rangers in 2019 producing two goals and six assists in 10 outings.

But the winger had a quiet night by his standards in a 1-1 draw against a Bogdan-less Hibernian on Friday, though Kent was still one of the Gers’ better performers.

Three more players were in action in Europe.

Loris Karius continues as Besiktas’ No. 1 but the German conceded twice for the second game running as his side earned a dramatic 3-2 win over Konyaspor.

Karius should have saved the first goal as he allowed a shot underneath his body, but he could do nothing about the second, beaten by a superb finish.

Thankfully Besiktas scored a stoppage-time winner to take the heat off Karius, but he has now conceded seven goals in his last three games.

Another impressive box-to-box performance from Marko Grujic wasn’t enough to prevent Hertha Berlin suffering a 2-1 defeat at Freiburg on Saturday.

Grujic still stood out as Hertha’s best player on the day despite the loss, showing his defensive and offensive quality as he posted four shots on target while winning four tackles and seven aerial duels.

And finally, Sheyi Ojo continued to work his way back from injury with 90 minutes in Stade de Reims II’s 2-0 victory over Sainte Genevieve on Saturday.