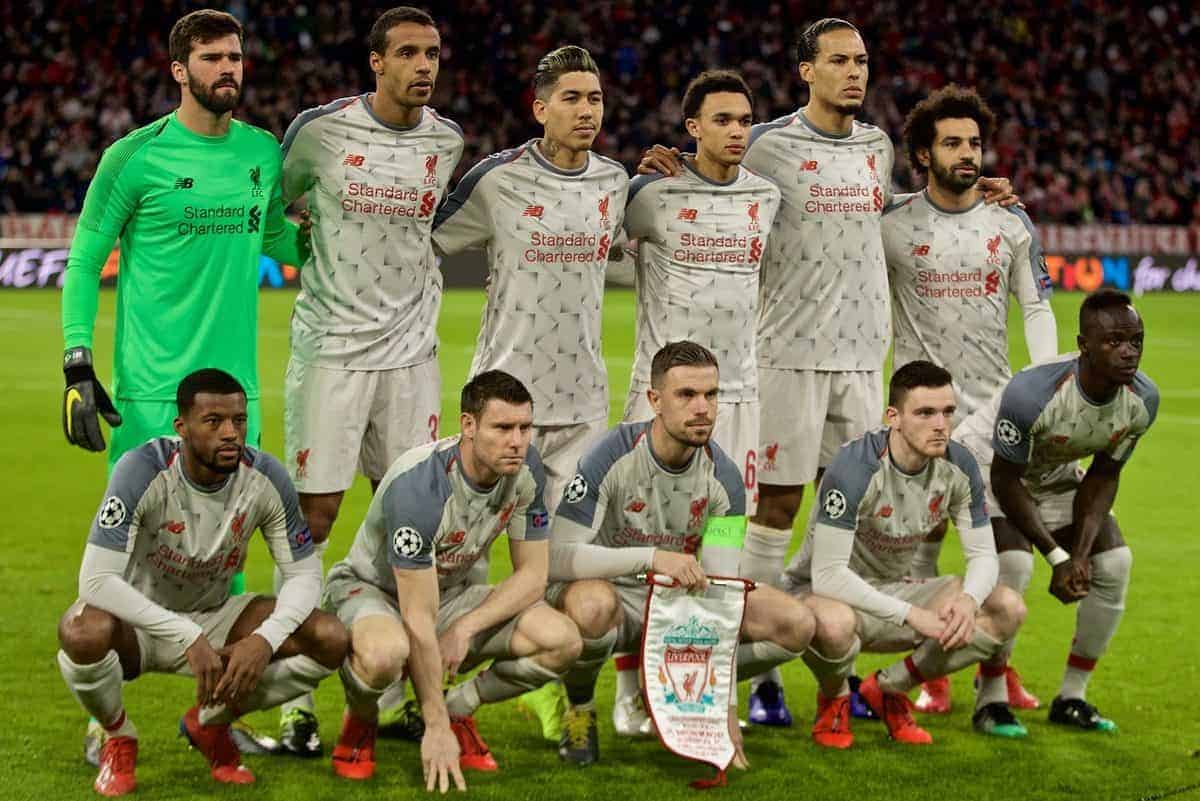 An outstanding performance saw Liverpool clinch a 3-1 win over Bayern Munich in the Champions League, safely securing their passage to the quarter-finals.

The Brazilian was again denied a clean sheet in Europe for the fourth time this season, but he could do little to stop Joel Matip from turning the ball into his own net.

With the exception of friendly fire, he was largely untested for much of the night but exuded the level of confidence on and off the ball which the Liverpool faithful have come to expect.

Was quick off his line and his distribution was spot on throughout.

Was the primary target for Bayern’s attack, more notably in the first half, and he stood up to the test with few blemishes to his name.

Provided width to Liverpool’s attack and linked up well with Mohamed Salah on the right flank, picking out a number of excellent balls to slice through Bayern’s midfield.

Even with the game done and dusted the youngster was quick to track back and stop the home side in their tracks in the box.

The centre-half’s first half was mixed to say the least after turning the ball into the back of his own net in what was a lose-lose situation.

But to his credit Matip refused to let it dictate the rest of his performance as his strong run of form continued, in what was his 10th successive starting appearance.

He was strong in the challenge and made timely interceptions, providing a strong resistance to any resemblance of threat from the home side.

Set the tone for his superb night in Munich early on with a strong challenge on Robert Lewandowski in the penalty area.

And having first denied the home side a chance on goal, his next involvement of note came in the form of a perfectly weighted ball over the top to the onrushing Mane, whose finish was equal to that of the pass.

He was imperious as ever on the defensive front, but his perfectly placed headed goal ensured Liverpool’s safe passage into the quarter finals, with what was his third goal in his last four games. 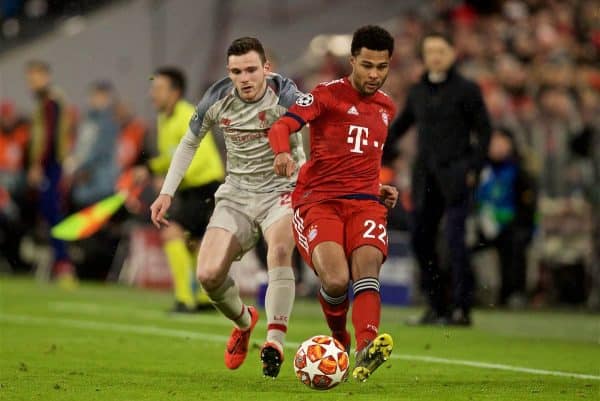 It was not the best night for Robertson as a lapse of concentration and discipline saw him caught out over the top for Bayern’s equaliser, with a similar incident in the second half gifting the home side a sight on goal.

He did provide good attacking threat throughout, but again let himself down with an unnecessary challenge in stoppage time to collect a yellow card which sees him ruled out of the first leg in the next stage.

After missing out against Burnley last time out the skipper was brought straight back into the fold as a member of Jurgen Klopp’s trusted midfield.

However, an innocuous roll of the ankle early in proceedings saw the curtains close on his evening before he could make a mark.

Some had suggested the Dutchman could be overlooked at the Allianz after showing signs of fatigue in recent outings, and his first 45 did little to disprove the notion.

Liverpool’s key to the fixture was to win the midfield battle and Wijnaldum struggled to impose himself on proceedings for much of the first half as his time in possession left a lot to be desired.

However, he did improve after the break and was far more composed, key to keeping the Reds moving forward as Bayern left spaces to exploit.

Like his midfield comrade, Milner struggled to make a mark early in the game with his time in possession too sloppy at times as Liverpool struggled to control the tempo, with possession given away far too easily.

As the game wore on he found himself having an influence further afield as the Reds exploited the Bayern’s need to attack.

He is a man oozing with confidence and was again Liverpool’s brightest spark in attack.

A constant thorn in Bayern’s side and his finish for his first goal was nothing short of exceptional, with a stunning touch, turn and finish giving Liverpool a crucial away goal early in the piece to set up the victory—a Goal of the Season contender.

To add the cherry on top of what has been an incredible month for the winger his headed finish was his 10th goal in as many appearances as his star continues to rise.

Worked himself into the ground once again and his interplay in attack was second to none.

Had an early mishap on the edge of the box to gift Bayern an early shot on goal, but from thereon out the Brazilian was a standout for Liverpool.

Led the line with intent and was unlucky not to have an assist to his name after holding the ball up expertly to feed Salah.

The Egyptian had started on the left flank in a surprise switch with Mane and while the experiment didn’t last long, Salah had another night to remember.

Although again failing to find the back of the net directly, he did set up Mane late in the piece with a brilliant pass from the outside of his left boot.

Did have a plethora of chances to score and he might have been best served looking for one of his team-mates on one or more of those occasions. 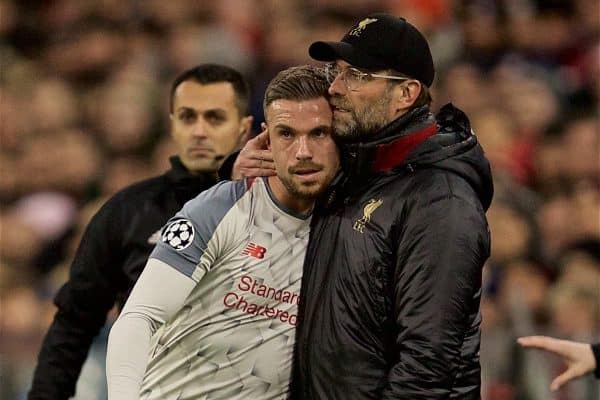 His initial omission from the side drew widespread scepticism on social media, but he was handed his chance to make a mark when Henderson went down early.

The Brazilian was sloppy in possession a few times too many and he was part of the reason for Liverpool losing control late in the first half.

However, his presence alone changed the dynamic of the Reds’ midfield and offered a forward momentum which was desperately needed.

Not shy to put in a challenge, with his last-ditch tackle on Kingsley Coman one example.

Was bright as soon as he came on and was key to setting up Liverpool’s third.

Had little time to have any influence.

The manager was criticised for his selection of a midfield which has struggled to get the results needed in recent times, and while an untimely injury to Henderson derailed his plans, Klopp navigated the tie superbly.

Liverpool were primed to bide their time and pounce at the right moment and Mane’s opener ensured it was the perfect away European performance.

It was a statement victory which will fill both the players and supporters with renewed belief, not that it was needed, over what the season can have in store.

It’s a performance which earmarks the growth the team has undertaken under Klopp’s tutelage, and now all that is left to do is to await the unlucky side who gets picked against the mighty Reds in the next round.