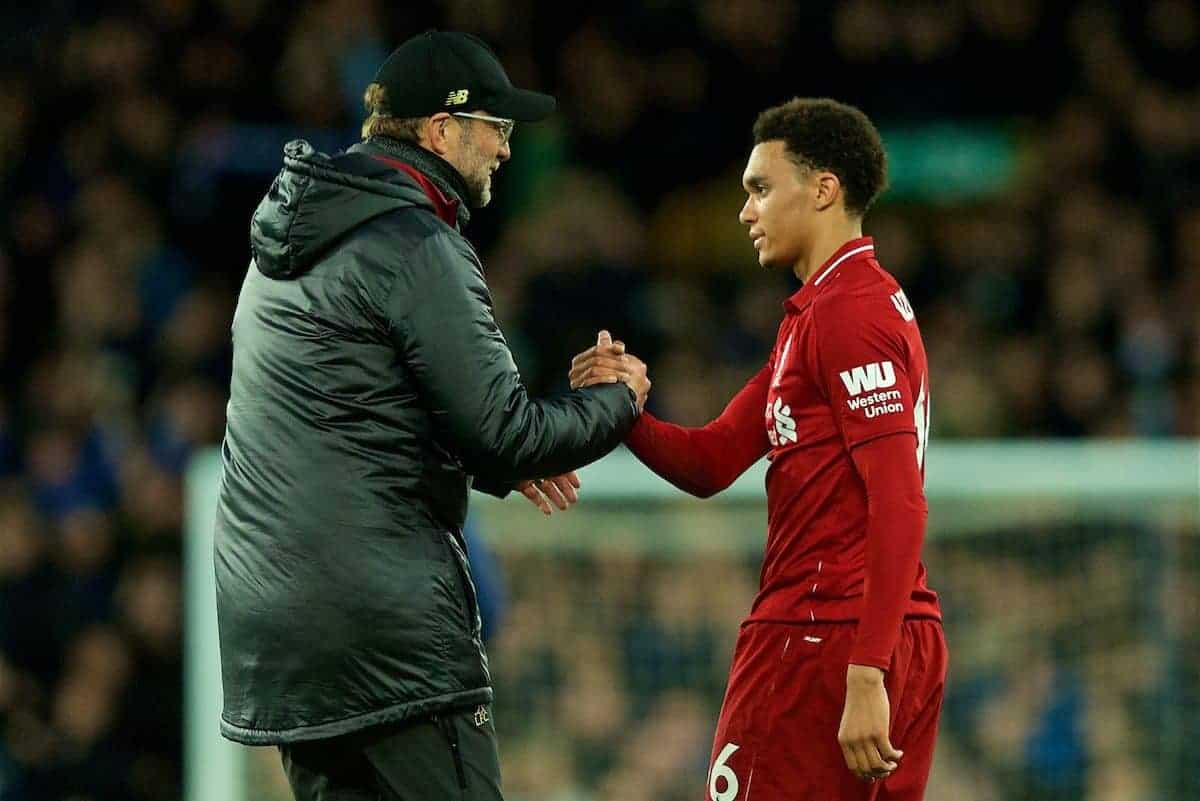 Liverpool could only struggle to a 0-0 draw at Everton on Sunday, with one man standing out comfortably for the Reds in a disappointing Merseyside derby.

Jurgen Klopp‘s side knew that only a win would take them back to the Premier League‘s summit, following Man City‘s 1-0 victory at Bournemouth the previous day.

You could have been forgiven for thinking the players were unaware of this, though, as they served up a second lifeless away display in succession.

Mohamed Salah was guilty of missing two wonderful chances to put Liverpool ahead, but in truth, they never merited all three points and Everton looked the more likely to win it late on.

It is a result that now makes the Reds underdogs to win the title, but there is still the potential for twists and turns along the way.

Here, we compare our ratings with those from the Liverpool Echo, the Mirror, the Independent, Sky Sports, ESPN, FotMob and the This is Anfield readers: 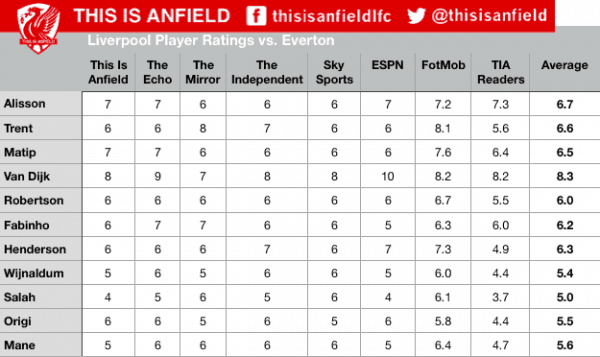 Virgil van Dijk (8.3) cemented his reputation as Europe’s best centre-back, as well as strengthening his hold on the PFA Player of the Year award.

The Dutchman was a joy to watch at Goodison Park, completely bossing Dominic Calvert-Lewin and showcasing his peerless all-round game.

ESPN’s Glenn Price went as far as to give him a perfect 10-out-of-10 rating, hailing him as a “colossus” at the heart of Liverpool’s defence.

This is Anfield’s Henry Jackson felt Van Dijk “comfortably outperformed every one of his team-mates,” on a day when too many failed to show up.

While Van Dijk was the star man, Salah (5.0) endured a pitiful afternoon, ultimately going missing when the Reds needed their best attacking player to shine.

The Echo‘s Ian Doyle correctly declared that he “lost the ball horribly with practically his first touch which set the tone,” and he never recovered from that point.

Andy Dunn of the Mirror was another who was critical of Salah’s wasteful touch, as he continues to struggle for consistently good form.

It says a lot about Liverpool’s performance that the second-highest rated player at Goodison after Van Dijk was Alisson (6.7), who had little to do throughout.

Gini Wijnaldum (5.4) has been an outstanding performer this season, but he reverted to the frustrating player of old on Sunday, going into his shell on his travels.

Price thought the positions he took up were “more suitable for Naby Keita or Xherdan Shaqiri,” neither of whom were introduced, strangely.

Liverpool now have the whole week to prepare for Sunday’s visit of Burnley, in what is now a must-win game in the title race.

There can be no more dropped points in the coming games or the title dream will quickly fade for another season.