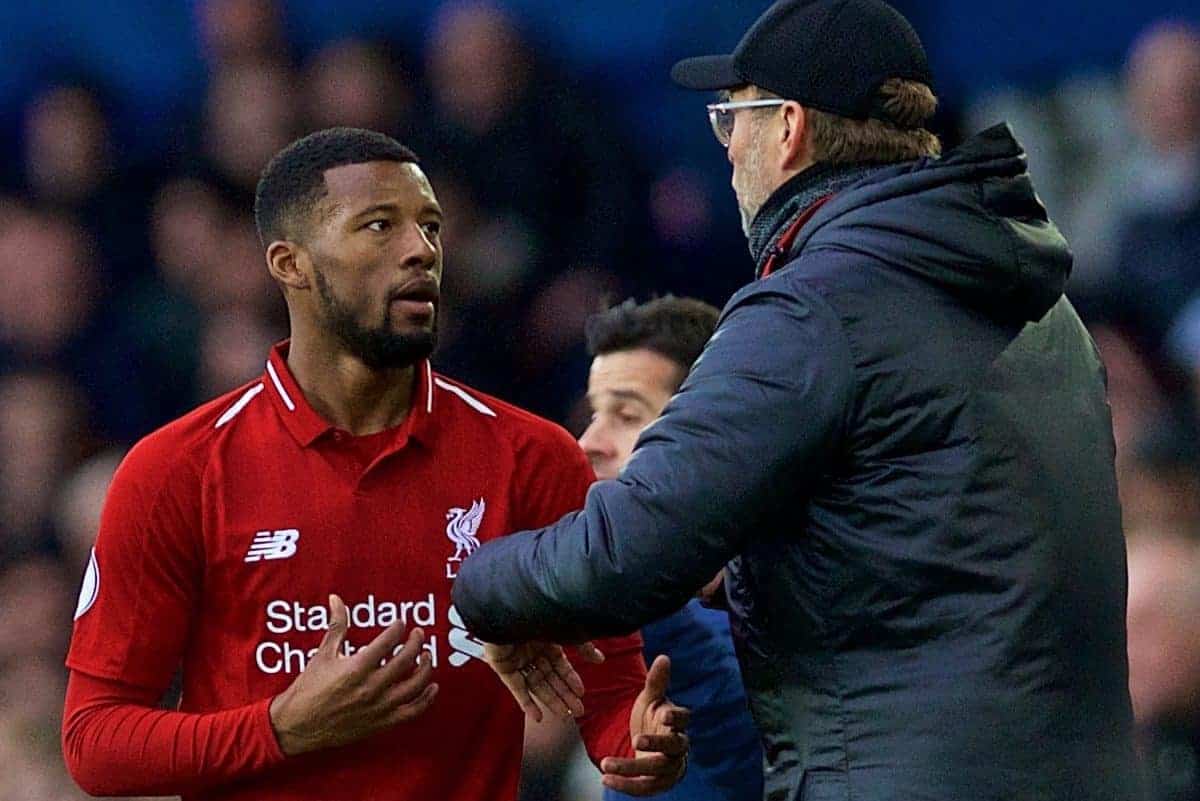 Gini Wijnaldum was left to consider whether it “suited” Liverpool to be the underdog, rather than the leader, in the title race after drawing 0-0 at Everton.

The Reds were held to a frustrating stalemate in the Merseyside derby on Sunday, which saw them stay a point adrift of Man City at the top of the Premier League.

This is the first time Jurgen Klopp‘s side have fallen behind the champions having played the same number of game since December 7, and this has therefore led to suggestions their title hopes have faded.

But there remain nine games before the end of the season, and with City still to play the likes of Tottenham and Man United while still in three competitions, there are likely to be further twists in the tale.

For Wijnaldum, a goalless draw at Goodison Park was undoubtedly “a difficult one to swallow,” and when asked by Sky Sports if chasing City would relieve the pressure the Dutchman said “we have to see”:

“Everyone wanted to be top of the table. But I don’t want to say that it’s a setback.

“It’s normal that we are disappointed but that’s the situation and we have to deal with it. We are going to train hard and make sure we win the rest of the games.

“We have to perform and try to win every game because City will do the same.

“I don’t know [whether we prefer to chase them]. We have to see if it suits us better. It’s always difficult to say.

“I think they are used to the pressure. For us it’s new. We just have to make sure that in the last nine games we give our all, and we’ll see what happens.”

Virgil van Dijk was Man of the Match in a hard-fought draw, with Sky Sports pundits Jamie Carragher, Graeme Souness and Gary Neville all backing him for the PFA Player of the Year award after another outstanding performance.

But he was unable to mask his disappointment as he assessed the landscape of the game and how it impacts the Reds’ hopes:

“I think based on the chances [created] we deserved three points, it says a lot that in the end they’re celebrating a 0-0.

“So obviously we are disappointed. We had chances to win the game, we didn’t finish them off.

“Our next game is next week [at home to Burnley], that’s the only thing we’re going to be focusing on now.

“Obviously everyone wants to be top of the league, but the situation is how it is, we can’t change that at the moment.

“The only thing we can change is to keep winning games, and the focus is on next week.” 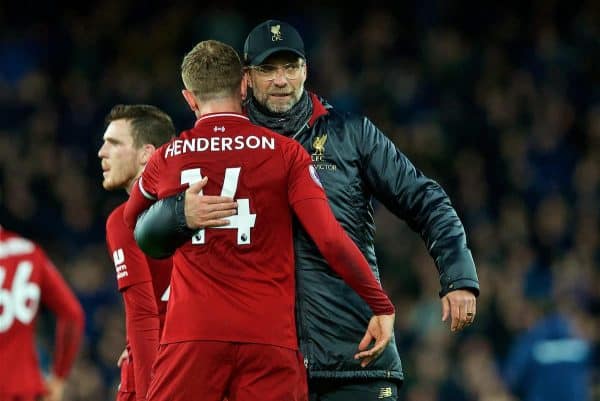 Joining Van Dijk for his post-match interview, Jordan Henderson reflected the centre-back’s view, ruing a host of missed chances from the likes of Mohamed Salah, Fabinho and Joel Matip but praising his side’s defensive play:

“[We’re] obviously disappointed because we wanted to come here and get the three points.

“I felt as though we created enough chances to win the game, defended well—obviously the big man and Joel defended really well at the heart of the defence.

“Of course we’ll be disappointed, because we want to win every game.

“But at the same time we defended well as a team, we just need to be more clinical in the final third.”

Concluding, Henderson provided a positive take on the squad’s hopes, impressing in his role as captain:

“We have high expectations for ourselves, we want to go and win Man United away, Everton away.

“But that’s football. We got a point in both games, so we’ve go to keep going now right until the very end.

“There’s a lot of football to play, a long way to go, so we just need to keep going as a team.

“I’ve got a lot of belief in this group of players and we just need to stay confident, keep going and see where it takes us.”

The captain followed this up on Instagram, joined by Andy Robertson and Trent Alexander-Arnold in vowing to “fight until the very end for this title”:

We will stay positive and keep fighting right till the end! ?? #YNWA

9 games to go and we will fight for everything!!? #YNWA

The battle is far from over Reds! We will fight until the very end for this title #YNWA ?

For Roberto Firmino, Sunday was a step forward after suffering an ankle injury in the 0-0 draw at Man United in February, with the Brazilian coming off the bench in the second half:

His return to fitness could be key as Liverpool look to move on from this setback, with Burnley to visit Anfield next Sunday in a great opportunity to revive hopes on Merseyside.