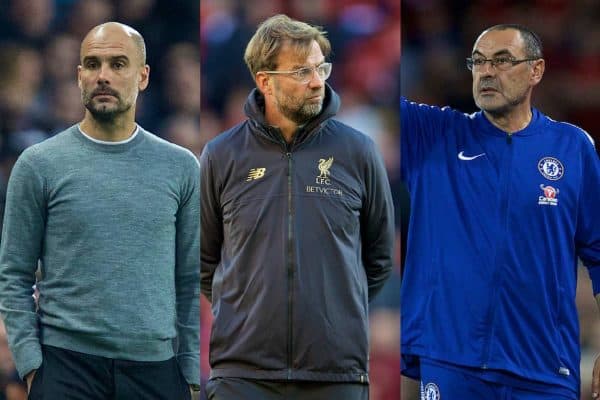 Chelsea manager Maurizio Sarri and Manchester City boss Pep Guardiola have both backed the call for teams to be taken off the pitch if players are subjected to racist abuse.

England players Danny Rose and Callum Hudson-Odoi had racist chants directed at them during the 5-1 Euro 2020 qualifying victory over Montenegro on Monday night.

Manchester City forward Raheem Sterling reacted to scoring England’s final goal by pulling his ears in front of home fans as a sign of defiance, later also taking to social media to address the issues head on.

Chelsea, meanwhile, lodged a complaint with UEFA regarding alleged racist abuse towards 18-year-old winger Hudson-Odoi during their 5-0 Europa League win over Dynamo Kiev in the Ukrainian capital on March 14.

The Football Association described the incidents in Podgorica as “abhorrent” and governing body UEFA subsequently opened disciplinary proceedings against Montenegro, including a charge of racist behaviour.

There have been calls for the punishments to be harsh, while England manager Gareth Southgate has also underlined the need for education to try to tackle the wider issues.

Sarri feels direct action would send a clear message. The Italian said: “We need a rule I think, a rule for the Premier League, but for all the championships, for all of football. A rule that can permit us to stop the match.

“It’s a big problem, I think that we need to do something different, probably it’s right to stop the match for 10 minutes in the first situation.”

City boss Guardiola, meanwhile, feels the issue of racism is not just a problem for football and is “getting worse” across European society.

Asked if managers should have the right to take players off the pitch under such circumstances, Guardiola said: “We could do that, we could do that. Football is a strong weapon to defend the principles of humanity.

“When the club or the players or the organisation decide to do it, of course for myself we are going to follow them.

“The situation changes when you do something, if not it’s impossible and the situation is always the same.

“That is why when people like [Sterling] or other cases express what they express it’s good for our future, for our society to do it.”

The Argentinian said: “We need to fight against that, to try to stop that happening. In 2019, this situation still happening, it’s something I can’t believe and it’s in our hands to do something to stop that.

“We need to apply our power to stop it happening. Nobody deserves to be abused and feel like Danny or Sterling or other people feel on the pitch and in the street.”

“Whatever I could do, I would do. We have to stop games, we have to do everything. Each punishment from my point of view is pretty much allowed,” the German said.

Pressed on whether he would take his players off, Klopp added: “If it’s the whole stand, then I would do it 100 percent. But that’s too much power for one or two idiots or three or four idiots.

“We have to find ways to punish these guys, to get them out.”