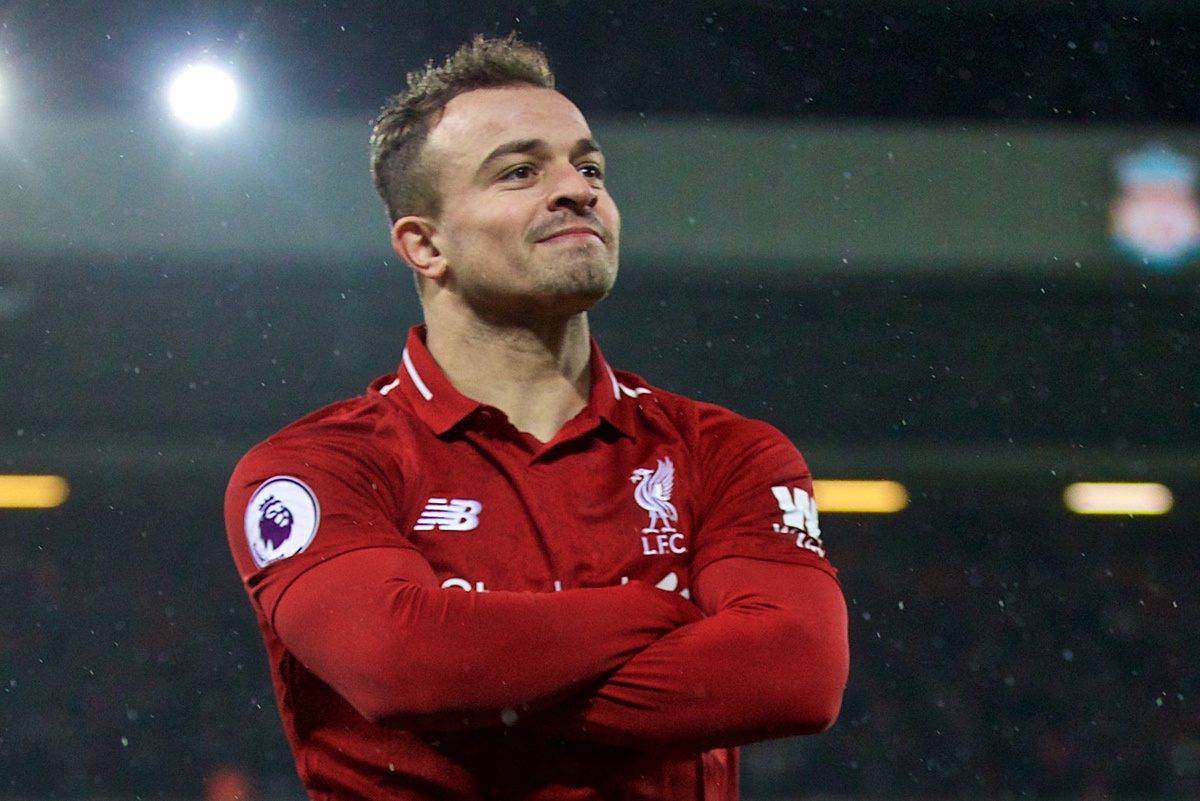 Xherdan Shaqiri‘s role has diminished under Jurgen Klopp, but facing a lighter stretch of games the Swiss should be primed to make his Liverpool return.

Soon after Shaqiri’s £13.75 million arrival from Stoke City, the winger was widely lauded as one of the bargain signings of the summer.

An overhead kick against Man United in pre-season caught the eye, and after he was integrated into the side at competitive level he soon took up a focal role in Klopp’s starting lineup.

By the end of the year, Shaqiri had scored six and assisted three, starting in nine of his 15 appearances in the Premier League as well as once in the Champions League and once in the League Cup.

Between the first game back from the October international break at Huddersfield and the home clash with Arsenal on December, he featured in all but one game in the league, starting eight start of 12 including five in a row.

That run also included his decisive two-goal cameo in the 3-1 thrashing of Man United at Anfield, and in fact all six of his strikes came over those 11 league appearances.

The reverse fixture against United was Shaqiri’s only outing in the last five games in all competitions, and that saw him on the field for just 18 minutes.

Since the turn of the year the 27-year-old has started just three times in 11, one of which was in a heavily rotated side against Wolves in the FA Cup, and he has totalled 300 minutes on the pitch; or 37.5 per appearance.

It is unclear as to why Shaqiri has fallen down the pecking order, although an abdominal injury that kept him out of the 3-0 win over Bournemouth hasn’t helped.

But Klopp’s decision to replace Sadio Mane with Adam Lallana in Sunday’s 0-0 draw at Everton provided a stark sign.

The manager opted for the conservative in the Merseyside derby, telling reporters after the game that it wasn’t the moment to “throw everything in that direction,” and to an extent this is justified.

Liverpool didn’t lose, and despite relinquishing their lead at the top of the table remain just one point behind Man City, so Klopp opting for Lallana was likely due to his off-ball work.

Shaqiri has only once started in a 4-3-3 system for the Reds, that being in the 2-1 loss to Chelsea in the League Cup in September, and only twice has he been trusted to start in a central role in the 4-2-3-1.

One of those saw him create two goals in a phenomenal first-half showing against Southampton in September, only to be hauled off at half-time, while the other saw him produce a man-of-the-match display in a tight 1-0 win over Huddersfield.

For better or worse, Klopp seems to only trust his new No. 23 out wide, and almost exclusively in a 4-2-3-1—with Liverpool switching to this setup on his introduction at Old Trafford last month.

Furthermore, with both Shaqiri and Naby Keita only completing the full 90 minutes in the league four times so far, it also suggests he doesn’t fully trust two of his four summer signings.

Speaking after his shock substitution against the Saints, the manager explained that he brought Shaqiri off in order to “control the game,” which has been the story of the season.

But it poses the question as to why Klopp sanctioned a deal to bring the Switzerland international to Anfield if he were not convinced he could adjust to his demanding philosophy.

The Reds controlled both games against United and Everton, as well as the 0-0 draw with Bayern Munich in the Champions League, but across all three games only one forward created more than one chance: Roberto Firmino (three).

Five chances came from Klopp’s midfield in those three games combined: two from Fabinho, one from Keita, one from Jordan Henderson and one from Gini Wijnaldum.

This was likely part of the plan, with three clean sheets testament to Liverpool’s control, but now is the right time to release the shackles and restore Shaqiri—who averages 1.6 key passes per 90 and is still fourth-top goalscorer with six—to the fold.

While home clashes with Tottenham and Chelsea may require this conservatism, the winger’s creativity, goalscoring ability and fearlessness are ideal for the remaining league meetings with Burnley, Fulham, Southampton, Cardiff, Huddersfield, Newcastle and Wolves.

Shaqiri proved he can shine in adversity in last season’s eight-goal, seven-assist campaign with Stoke, and whether he comes up against a deep-sitting defence or a more progressive outfit he has the quality to make the difference.

Tactically, this may necessitate a return to the 4-2-3-1, but this is certainly not a negative, even if Mohamed Salah is deemed best on the right. 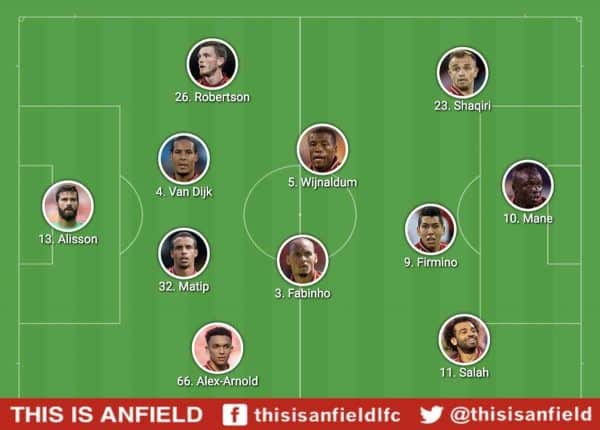 In Sadio Mane, Klopp has another solution up front, allowing him, Shaqiri, Firmino and Salah to all rotate in a fluid forward line.

And with the defensive options improving, this in turn provides a stable midfield base with Fabinho and Wijnaldum, with Henderson and Keita able to step in too.

After the stalemate at Goodison Park, Jamie Carragher flagged the failure to sign Nabil Fekir from Lyon as a key flaw in Liverpool’s title bid.

And while the Reds may be missing the Frenchman’s influence, the alternative was clearly Shaqiri, and in striving to recapture their edge over City, the No. 23 must be trusted again.