Roberto Firmino misses Liverpool’s third-last Premier League clash against Huddersfield tonight, but Alex Oxlade-Chamberlain is back in the squad.

Firmino is absent due to a slight groin strain, with reports unclear as to the severity of his problem, which has prompted Jurgen Klopp into a rejig this evening.

The manager has stressed the importance of Liverpool taking six points from their next two league games in order to set up an anything-goes final day on May 12.

And as such, he has named a strong side to take on the already-relegated Terriers despite Firmino being forced to miss the matchday squad.

Alisson continues in goal, behind a back four of Trent Alexander-Arnold, Dejan Lovren, Virgil van Dijk and Andy Robertson.

In midfield, Gini Wijnaldum is set to take up the No. 6 role, to be joined by Jordan Henderson and Naby Keita again.

Fabinho is not in the squad after the head injury he suffered at Cardiff last weekend.

And in attack, the absence of Firmino means Daniel Sturridge is handed his first league start of 2019, alongside Mohamed Salah and Sadio Mane.

On Firmino’s injury, Klopp has said it is “not a big thing” and supporters will be hoping he can be fit to start at the Nou Camp next Wednesday night.

The hugely positive news before kickoff is that Oxlade-Chamberlain has been named on the teamsheet for the first time since his knee injury against Roma at Anfield 367 days ago. 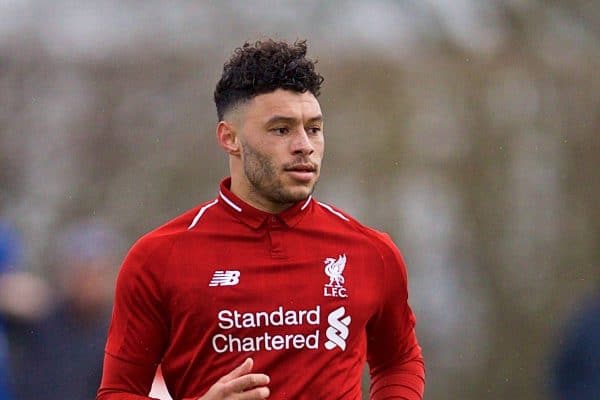 Liverpool’s No. 21 has worked his way back to full fitness after a serious knee injury, and after a string of appearances for the under-23s is now considered fit enough for the first team.

Understandably, Klopp will remain cautious with the 25-year-old, and expectations should be tempered if he comes off the bench.