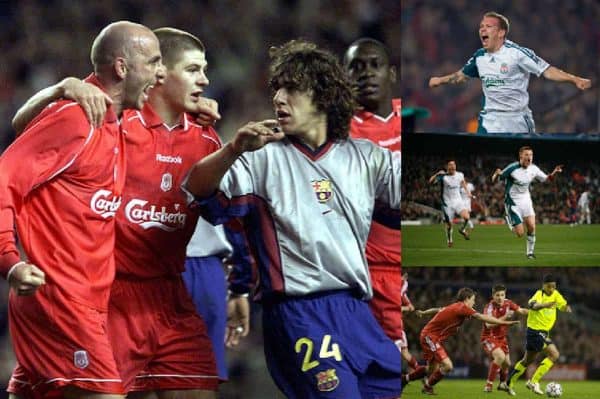 As Liverpool get ready to take on Barcelona in a mouthwatering Champions League semi-final tie, we take a trip down memory lane and recall past clashes.

The Reds face a huge task starting at Camp Nou on Wednesday night, as they look to go one better than last season and secure European Cup number six.

Trying to stop them reaching the final are a Barcelona side who have just clinched a fourth La Liga title in five seasons, led by the unrivalled Lionel Messi and a supporting cast including Luis Suarez and Philippe Coutinho.

In total, there have been eight competitive meetings between the two clubs, with three knockout ties taking place during that time.

Here’s a look back at how those games panned out.

Back in 1976, neither Liverpool or Barcelona were the European forces they are today, with no European Cup wins between them.

The two teams were pitted against one another in the UEFA Cup semi-finals—a competition the Reds had won under Bill Shankly three years earlier.

A famous night at Camp Nou saw Bob Paisley’s Reds secure a precious 1-0 win, after John Toshack silenced the home faithful with the only goal of the game.

In the return fixture at Anfield, progression was achieved via a 1-1 draw, although it wasn’t plain sailing.

Phil Thompson’s opener early in the second half was swiftly cancelled out by Carlos Rexach, making for a nervy finale as Barcelona looked for a tie-winning second away goal.

The Reds won the final against Club Brugge 4-3 on aggregate; they would defeat the Belgian outfit in the European Cup final two years later, too, thanks to Kenny Dalglish‘s Wembley winner.

A quarter of a century after Liverpool and Barcelona first met in a UEFA Cup semi-final, history repeated itself. Once again, it was the Merseysiders who prevailed.

Having been an attack-minded, but mentally questionable, side under Roy Evans, Liverpool were now a defensively resolute team that Gerard Houllier had made one of the toughest to beat in Europe.

The goalless draw that unfolded at Camp Nou may not have been pretty—Liverpool essentially defended for the entire 90 minutes and the home fans booed Houllier’s tactics—but it gave them a wonderful opportunity back at Anfield.

Alaves were seen off in a crazy final, with Delfi Geli’s ‘Golden Goal’ own goal earning Liverpool a 5-4 win, after Markus Babbel, Steven Gerrard, McAllister (another penalty) and Robbie Fowler had earlier found the net.

The following season, the two sides found themselves in the Champions League, with Liverpool competing in it for the first time.

There was a confidence that the Reds would again get the better of Barca after they were drawn together in the second group stage, but they were in for a shock at Anfield.

The La Liga giants played Houllier’s men off the park, and although Michael Owen actually put the hosts in front, it was one-way traffic from that point on.

Patrick Kluivert equalised clinically before half-time, before Fabio Rochemback, once of Middlesbrough fame, put Barca 2-1 up.

The icing on the cake was delivered by Marc Overmars, who finished off a stunning pass move that was so good the home fans applauded it.

Another goalless draw in Spain followed—an important point for Liverpool—and while progression to the quarter-finals was achieved after a win over Roma in the last group stage game, the Reds were dumped out by Bayer Leverkusen.

By the time 2007 rolled around, Liverpool were emerging as a true Champions League force under Rafa Benitez, having won the competition in 2005.

Despite this, a star-studded Barca team were favourites to progress when their last-16 tie arrived—a side that included a teenage Lionel Messi.

When Deco headed home relatively early on it felt like a bleak night in Catalonia was on the cards, only for the Reds to show wonderful spirit.

Much of the pre-match talk surrounded a fight that had taken place between John Arne Riise, Craig Bellamy and a golf club—and it was beautifully ironic that the pair were Liverpool’s heroes, scoring in either half.

That was, and still is, the only time that Barcelona have lost at home to English opposition in the Champions League.

One of those nervy European nights awaited at Anfield in the second leg, but Barca’s 1-0 victory, thanks to Eidur Gudjohnsen’s goal, still saw the Reds go through on away goals.

Liverpool got all the way to a second final in three seasons, but AC Milan got their Istanbul revenge after a 2-1 win in Athens.