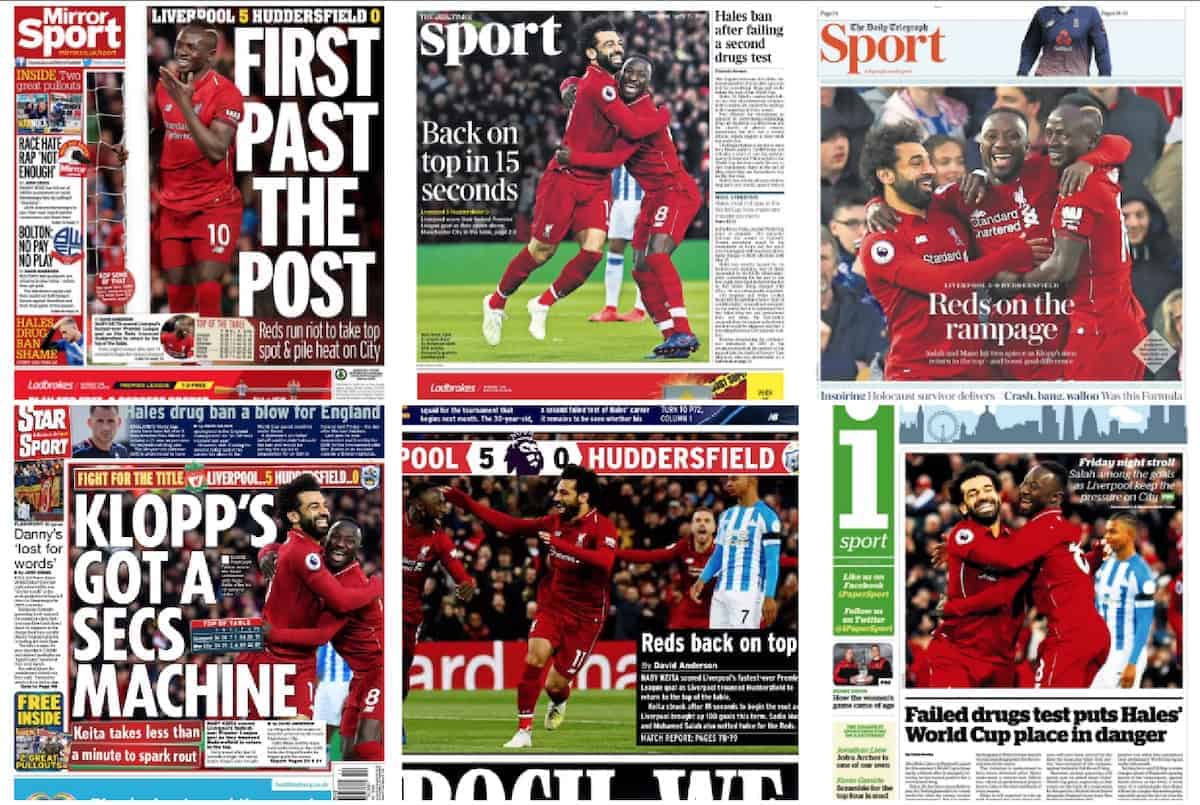 The media were in awe of Liverpool’s effortless performance in the 5-0 rout of Huddersfield and praised the Reds for refusing to give up the title chase.

The Reds continue to keep their end of the bargain and the pressure on Man City after thrashing the Championship-bound Terriers.

Braces apiece for Sadio Mane and Mohamed Salah after Naby Keita’s opener just 15 seconds in earned a great three points to ensure Liverpool moved back to top of the Premier League.

It was a perfect night at Anfield ahead of the huge semi-final first-leg against Barcelona, with the win taking the Reds to a club-record 91 points in the Premier League era.

Here’s how the media assessed the victory.

Writing for Goal.com, Neil Jones was in awe of how Liverpool made the game look so easy:

For Liverpool, the simplicity of this win was remarkable. They didn’t even play particularly well in the first half, but they walked through the evening. They got five and could have had more.

The Mail’s Martin Samuel was impressed by how the Reds played with such belief and control under immense pressure:

Yet at this crucial stage in the season, we can ask no more than that Liverpool win.

The pressure is on them and while they were expected to dispose of Huddersfield comfortably, the manner in which they did was still impressive, given the circumstances.

With 10 straight wins in all competitions, Liverpool haven’t put together this kind of run since Rafa Benitez was in charge back in 2006.

Liverpool haven’t dropped a single point in the last 54 days. Their consistency under pressure has been breathtaking.

ESPN’s Mark Ogden stated that Liverpool really cannot do anything more in this pursuit of the title:

Neither they nor Salah could have feasibly done much more, but they could still fall short.

Also discussing the worst case scenario, Independent’s Mark Critchley thinks Klopp’s team will be the best side to not win the title if they do fall short:

If Jurgen Klopp’s side are to fall short of the club’s first league title in 29 years, then they will do so as the best runners-up of the Premier League era.

The Telegraph’s Chris Bascombe discussed how hope has kicked the Reds in recent years, but explained how Liverpool’s performances are giving real reason to hope the title will arrive:

The problem is, in sport and at the modern Anfield, hope can be the greatest tormentor. Liverpool cannot trust hope. It has let them down too much recently, often at the point where the club has needed it most.

Whenever this Liverpool team plays the possibilities still seem endless.

Pearce believes that Liverpool’s consistency proves that this is no one-off campaign, and instead shows the Reds will be competing for major honours in the coming years:

This has been a season of immense progress, no matter what the final few weeks of the season holds both domestically and in Europe.

This Liverpool team is built for the long-term and they will be challenging for the big prizes once again next term with a manager at the helm who Kopites wouldn’t swap for anyone. 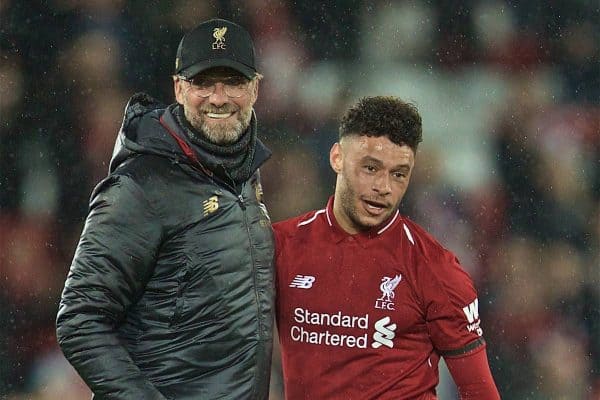 Jones thought the relaxed manner of the game was ideal for Liverpool ahead of the semi-final first-leg in Barcelona:

With a Champions League trip to Barcelona on the horizon, it was the perfect scenario. They could manage their fitness, in-game.

ESPN’s Dave Usher was pleased to see Klopp make sensible changes, but thought the German could have made even more given the opposition:

In truth, Huddersfield were so poor he could have made more changes and still won the game comfortably, but it’s good to see the German not taking any unnecessary risks with his selections.

Standard Sport’s David Lynch was pleasantly surprised Alex Oxlade-Chamberlain’s display and thinks he could well play a role in the final games:

And the sharpness of his performance suggested that Oxlade-Chamberlain could even have a role to play in some huge remaining fixtures.

The Liverpool Echo’s Paul Gorst warned not to expect too much from Oxlade-Chamberlain too soon, and thinks the midfielder should only be on the fringes of the action in the run-in:

Liverpool won’t see the best of Oxlade-Chamberlain until next season and this could quite well be his only appearance of a campaign that still promises so much for Klopp’s Reds.

It is more than a start, however. It’s been a long road back from the surgery table and hospital gown, but he deserved his moment here. Brighter days are ahead.

Taking a chance to discuss Liverpool’s strengthening squad, Lynch thinks the quality on display throughout the group shows that only small tweaks are required this summer:

For the first time in a year and two days, the Reds were able to include the fit-again Alex Oxlade-Chamberlain in their matchday squad – a man who will embody the ‘like-a-new-signing’ cliche next term. Meanwhile, Keita, whose debut campaign at Anfield is finally coming to the boil, showed that so much more can be expected of him in 2019-20 by netting his third goal in five games.

This is a squad packed with young, improving players; only small tweaks are required when the summer window opens. 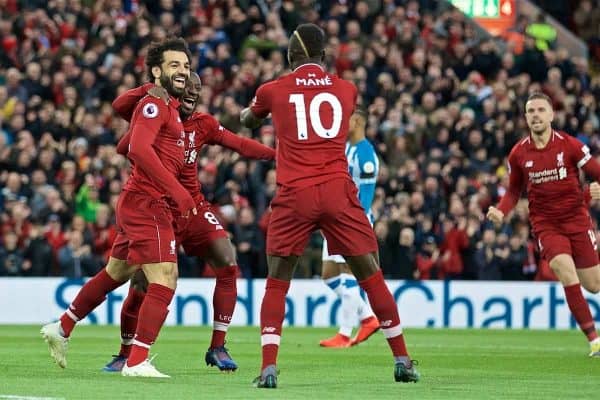 Ogden praised Salah for delivering the goods after being granted a trip to New York and also the Egyptian’s team-first ethic:

He might not score in every game, but even when he does not hit the back of the net, Salah’s eight Premier League assists this term highlight his contribution as a team player.

But it also goes to show how the likes of Salah can rise to the occasion, no matter how draining or gruelling their schedule.

Lynch praised Salah for improving his form to avoid a second season slump and thinks only voting circumstances cost the Egyptian a place in the PFA Team of the Year:

But at least any whispers about second season syndrome have been well and truly put to bed by one of the division’s elite players.

Perhaps the timing of the vote is what cost Salah recognition from his fellow professionals for what has been another remarkable show of goalscoring consistency.

On Mane, the Mirror’s Steve Bates thinks that the Senegalese would have been crowned the Premier League’s Player of the Year in any other season:

In any other season Sadio Mane might have been a Footballer of the Year winner.

Critchley lauded the attacking productivity from the pair this season and believes they deserve just as much credit as the big names for turning the Reds into contenders:

Much of Liverpool’s creativity this year has come down the flanks and their full-backs – Andrew Robertson and Trent Alexander-Arnold – were at it again here.

Their combined assist tally in all competitions for the season now stands at 24. They deserve just as much credit for turning Liverpool into contenders.

Lynch assessed that Robertson emphatically ended a quite simply ridiculous debate on Merseyside that Everton’s Lucas Digne is better than Liverpool’s No.26:

Guesting on the programme, a local journalist suggested that Everton’s Lucas Digne, not Andy Robertson, should have featured at left-back on the basis of their performances this season.

But as the Scot registered his 12th and 13th assists of the campaign in this game, the mere existence of such debate appeared to be rendered futile.

Jones went one further, questioning if there is in fact a better left-back than Robertson in world football right now:

The Scot now has 11 league assists for the season, tying a Premier League record for a defender. If there’s a better left back around right now, he’s well hidden.

Finally, Critchley reflected on a tough night Daniel Sturridge and thought the game showed how the striker has been left behind by this evolving Reds side:

Unsurprisingly, this veteran of Liverpool’s last title challenge five years ago looked off the pace when next to the new generation. And yet clearly, this team has moved on.