The Liverpool FC Women rounded off a tough season with an emphatic 3-1 victory over Everton on the final day of the Women’s Super League on Saturday.

After a campaign of highs and lows after a major upheaval on and off the pitch, the Reds hosted rivals Everton in their final game of the Women’s Super League.

Manager Vicky Jepson made just one change to the side that lost 2-0 at Birmingham last time out, as 19-year-old academy product Niamh Charles took Rinsola Babajide’s place in attack.

Speaking before the game, Jepson described the two previous losses to Everton this season as “unacceptable,” and insisted they would “give it everything” to ensure victory.

A pair of goals in the first half-hour were testament to this as Liverpool played out an energetic first half, with Courtney Sweetman-Kirk netting the opener from a Christie Murray free-kick.

Murray’s set-piece prowess was again key as Charles doubled the tally on 30 minutes, marking her emphatic return from injury.

Abbey-Leigh Stringer halved the deficit before the break, and while both sides had chances to net another heading towards half-time the score remained at 2-1. 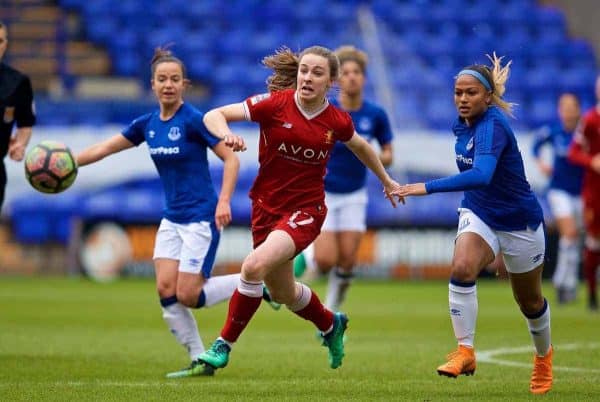 Jepson made a change at the interval as Yana Daniels made way and Babajide came into the attack, and both sides kept up the intensity as Laura Coombs tested Everton goalkeeper Kirstie Levell.

Babajide looked determined to add another for the hosts as she weaved her way through the bodies in the box, but the 20-year-old’s eventual effort was blocked.

The substitute almost turned provider in the closing stages as Babajide sent in a brilliant cross from out wide, but Sweetman-Kirk was unable to add to her squad-high tally as the ball eluded her.

Another delivery from the imperious Murray secured Liverpool’s victory, though, as her corner kick was flicked on at the near post and converted by the sliding Amy Rodgers for 3-1.

Victory means the Reds finish the season eighth in the Women’s Super League, just five points behind fifth-placed Reading but 32 off champions Arsenal.

The summer will hopefully bring stability to Prenton Park, as Jepson is eyeing silverware in 2019/20.