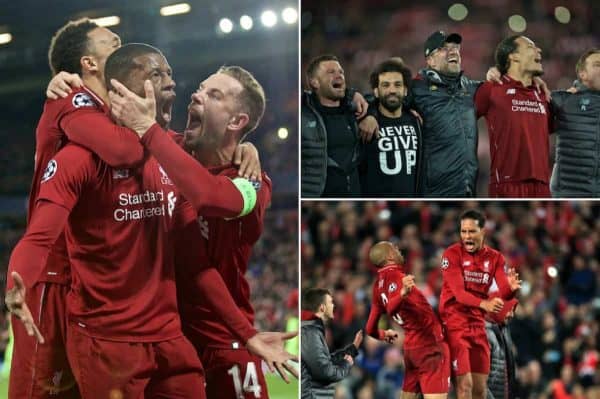 Liverpool produced a footballing miracle to comeback from 3-0 down and win 4-3 on aggregate against Barcelona to reach the Champions League final.

It seemed nothing more than a wild dream. It seemed quite simply impossible.

But not for Jurgen Klopp’s truly special Reds side.

Liverpool delivered Anfield’s greatest ever European night, pulling off a football miracle to earn a place in the Champions League final.

Klopp made four changes to his starting XI, with Joel Matip, James Milner, Xherdan Shaqiri and Divock Origi coming in.

Anfield was raucous even before the first whistle, as the home fans always believed that something special could happen.

A fast start was crucial chasing a 3-0 deficit and the Reds set an electric pace from the first whistle, hassling all over the pitch.

Lionel Messi couldn’t get in the game as he was closed down from all angles.

On seven minutes, Liverpool got the goal the breathless start deserved, with Origi converting on the follow-up from close range.

The Reds got through to the break ahead and Gini Wijnaldum entered the fray at half-time, replacing the injured Andy Robertson.

Then the magic arrived, as the Dutchman made a stunning impact with a brilliant brace.

First, Wijnaldum arrived to meet Trent Alexander-Arnold’s fizzing cross with a crisp finish in front of the Kop, which turned hope to genuine belief.

The Reds sensed the moment and just two minutes later, with 56 on the clock, Gini took it—heading home to complete a miraculous comeback.

Barcelona were stunned and Klopp’s side sensed blood and the chance to win the tie in the 90 minutes.

Liverpool went for it and with 11 minutes to go, the moment arrived.

Origi, the man for the big occasion, struck into the top corner after a genius early corner from Alexander-Arnold.

If Anfield exploded before, it was simply delirious now.

It was an agonising final 10 minutes, but Klopp’s warriors held on to give Anfield its greatest ever European night.

There were tears on the pitch and in the stands as a truly unbelievable moment sunk in at the final whistle.

Special scenes followed as Klopp and the whole squad stood in front of the Kop and belted out You’ll Never Walk Alone in unison.

It is a truly special result in a very special season for Liverpool—one that will forever be talked about for generations to come.

Liverpool will bring this confidence into the final day of the Premier League season against Wolves on Sunday, hoping to make another miracle happen.