Virgil van Dijk believes Liverpool are close to rediscovering the fear factor that made the club such a dominant force for the best part of two decades.

Between 1973 and 1990 the Reds claimed 11 league titles and a quartet of European Cups, all four won in an eight-season spell.

They were the most feared side on the continent and the benchmark for the rest of Europe.

That power has been gradually eroded but after the remarkable 4-3 aggregate win over Barcelona secured back-to-back Champions League finals, Van Dijk believes they are starting to re-establish their standing in the game.

“Hopefully. That’s something we work towards,” said the Netherlands captain.

“I feel that [Manchester] City already have that bit of status because they have been dominating last year so much.

“Hopefully we can keep going and make it very difficult for any team in the world.

“We have a great age group. Between 20 and 27, 28, so hopefully we can do it all together for the next couple of years at least and grow as a team and hopefully get a lot of success.”

With a place in Madrid secured, Liverpool still have an outside chance of winning their first domestic title since 1990.

They need to beat Wolves on Sunday and hope City drop points at Brighton to pip their rivals in an extraordinarily tight title race.

“If it happens, it happens. We have no influence on that. They have it in their hands,” added the Professional Footballers’ Association Player of the Year.

“We’re still in this season and still anything is possible.

“If it doesn’t happen then it’s not the end of the world. We’ve had a fantastic season, both of us. Man City have been outstanding as well.

“To compete with them says a lot about how we’re progressing from last year. It’s just the start. It’s not like next year we’re not going to try to do it again. It’s something we have to build on.

“Hopefully ourselves are going to keep challenging for the title. Man City are one of the best teams in the world and they’ve shown it the whole season how difficult they can make it for any team in the world. 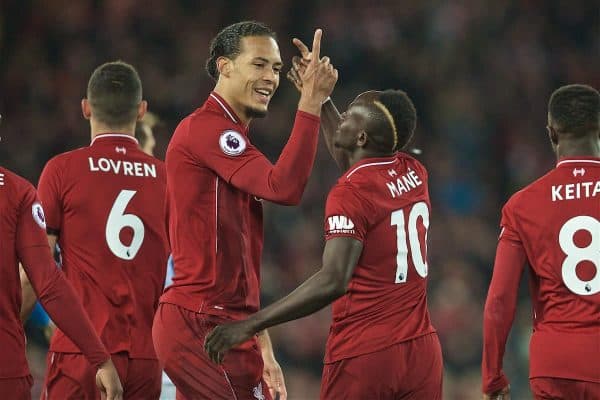 “The only thing we can do is try to win both: the Wolves game and the final.

“Deserve is not the right word. We have been outstanding this season and if something happens, everyone can be very proud and happy.”

Despite the position they are in, Van Dijk insists there is no pressure to win a trophy for validation of what is happening under Jurgen Klopp, who has lost his last six finals.

“Different teams in the world have a real urgency to win the Champions League and if they don’t it’s a real failure to their season,” he said.

“I don’t think we should think of it as a failure if we don’t win the Champions League.

“It’s not like we had a terrible season or we failed this season. It’s just the start and hopefully we can try to do this every year.”