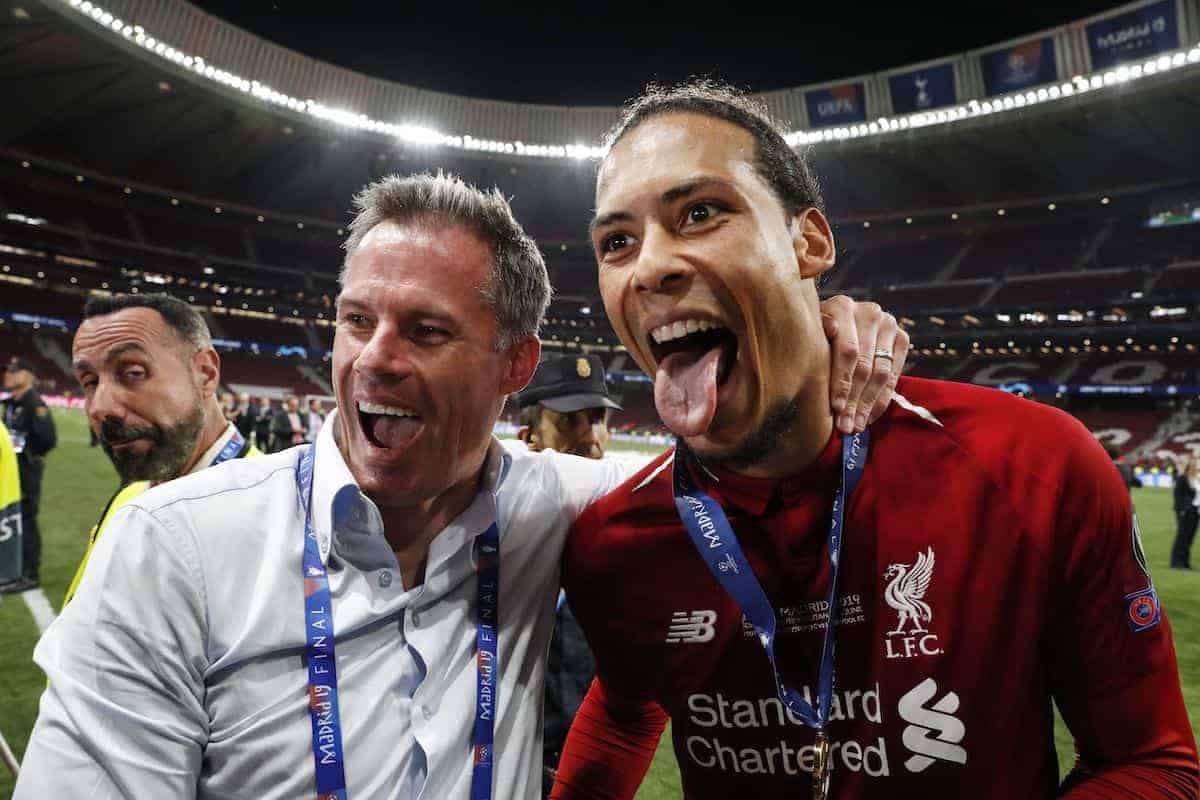 Liverpool were crowned European champions on Saturday night, and former Reds players sent messages of congratulations to a fresh batch of legends.

For many supporters, Liverpool’s 2-0 victory over Tottenham still may not have sunk in, on one of the most significant nights in the club’s history.

Mohamed Salah and Divock Origi were the goalscoring heroes at the Wanda Metropolitano, with the former firing home a very early penalty and the latter netting late on.

Jubilant scenes greeted the final whistle, culminating in Jordan Henderson and his team-mates lifting the trophy.

After the game, a host of joyous ex-Reds congratulated the players on social media.

Here’s a look at the best of the reaction, including Steven Gerrard and Jamie Carragher.

Congratulations to @LFC and all the fans. Welcome to the club Jürgen. #UCLfinal #Liverpool #YNWA #Sixtimes

For all the awful tweeters I’ve had since we lost the league?Have it???????im partying now folks ???ynwa pic.twitter.com/9iU6SsHu63

How much it means for him !! @LFC #champions #reds #YNWA pic.twitter.com/uGLSY3PzpU

Has been emotional to watch @LFC lift it ? for the 6th time “LIVE” at the @Metropolitano
?CONGRATS to all Liverpool FAMILY!!????? #YNWA Get in!!? pic.twitter.com/iQ80sAmgyR

Crowned king of Europe X6 ? ????? in my home @Metropolitano ?? So happy for everyone at the club, staff, players and supporters. Big congratulations @LFC . Well deserved #YNWA pic.twitter.com/43aX85a5Jb

Fantastic achievement for @LFC players, coaching staff. It’s big moment for that group of players after last season final. You never ever give up. Now enjoy the moment. @ChampionsLeague winner #YNWA

Congratulations to this historic club!! Very well deserved champions of Europe! So many people off the pitch at the club will enjoy this night! #YNWA pic.twitter.com/T2EzOlX2LJ

So deserved @LFC
What a season

Liverpool are set for a Champions League winner’s parade on Sunday, starting at Allerton Maze at 4pm, heading north on Queens Drive and ending on Blundell Street.

It is likely that some of those congratulating their successors tonight will be in attendance after a truly historic night for the club.