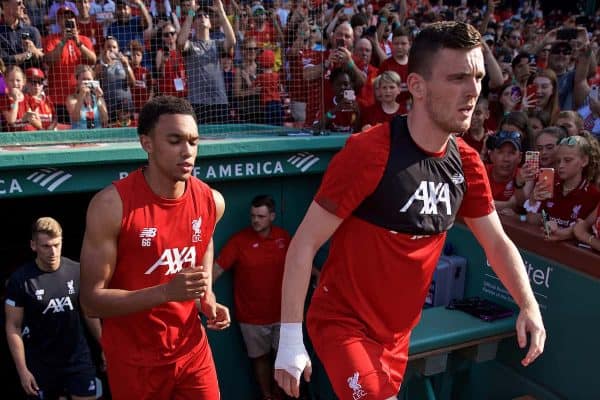 Jurgen Klopp has included Andy Lonergan in his starting lineup as Liverpool make the second stop of their US tour with a pre-season friendly against Sevilla.

The Reds arrived in Boston on Saturday afternoon, and were met by a fervent crowd of supporters as they held an open training session at Fenway Park later that day.

That served to be the prelude to their clash with Sevilla this evening, as the three-game tour continues in suffocating temperatures on America’s east coast.

Klopp is likely to make a host of changes throughout the game, but for now has named one XI with a vast array of options on the bench.

Lonergan starts in goal, with the ex-Middlesbrough ‘keeper providing experienced cover for pre-season and, tonight, Simon Mignolet a rest.

In defence, Trent Alexander-Arnold and Andy Robertson will take up the full-back positions, while Nat Phillips partners Virgil van Dijk at centre-back.

Gini Wijnaldum will anchor the midfield, to be joined by Jordan Henderson and Alex Oxlade-Chamberlain.

And in attack are Harry Wilson, Ben Woodburn and Divock Origi.

With the heat rising above 30 degrees in Boston, plenty of water breaks and alterations are to be expected, with the game likely to be played at a steady pace.

Ki-Jana-Hoever, Yasser Larouci and Bobby Duncan are among those in reserve, as pre-season continues to provide openings for the club’s best young academy talents.