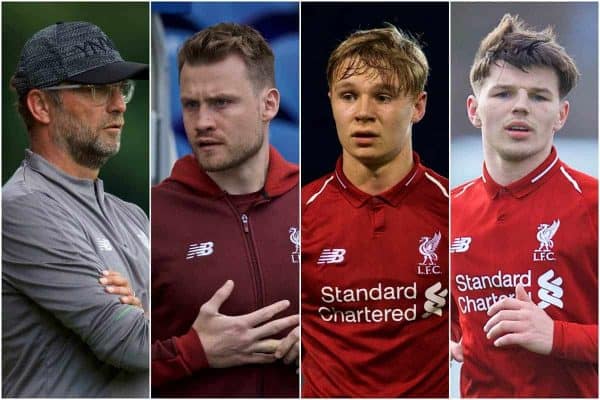 Jurgen Klopp updates on his squad for Tranmere, the US tour and chances for youth

Jurgen Klopp has provided an update on his plans for Liverpool’s first pre-season friendlies, and big chances for young players for those games and the US tour.

The Reds head to Prenton Park with an inexperienced squad due to ongoing international duty and extended breaks, which will make Klopp’s team selection more difficult.

Nine academy players have joined training this week, including goalkeepers Vitezslav Jaros and Jakub Ojrzynski and under-18s strikers Paul Glatzel and Bobby Duncan, and they are likely to be involved against Tranmere on Thursday.

However, despite a very late return after playing very little football in over a year, Klopp expects Simon Mignolet to feature in Birkenhead.

This likely comes due to concerns over Jaros and Ojrzynski’s lack of experience, and injuries to both Caoimhin Kelleher and, it transpires, now Kamil Grabara.

Speaking to the club’s official website, Klopp cast doubt over the involvement of Dejan Lovren in the first friendly, saying “we will see.”

The centre-back only returned on Tuesday, and appeared to struggle a lot more than Divock Origi with the lactate test.

And looking further ahead to the tour of the United States, which takes in clashes with Borussia Dortmund, Sevilla and Sporting CP, he hinted at academy players joining the squad as the likes of Sadio Mane and Roberto Firmino miss out.

“These boys are our future if they want to be our future,” he said, later adding: “We need all of them [for pre-season and the US tour] and that’s nice.”

“Only as an example, Bobby Duncan and Paul Glatzel: our offensive line that played last year is coming pretty late in joining us in the pre-season,” Klopp explained.

“So we have to be creative system-wise and all that stuff, but there will be moments when they have to play.

“Not only at Tranmere or whatever, but in America as well when we play Borussia Dortmund and all the other guys.

“So, it’s good and it’s always like this: when you are already in the club, then the door is always open for you to the first team.

“The thing is you have to go through by yourself—we only open the door, we don’t push you through.

“So, I’m open, I’m very open for exciting football players and if the boys show up, good for them and good for us.”

Liverpool have opted for a very youth-centric summer so far, with Ojrzynski (16) and Sepp van den Berg (17) the only notable signings and Harvey Elliott (16) to follow.

And opportunities for the likes of Glatzel and Duncan to stake their claim are welcome, although perhaps concerning in that the Reds are lacking experience up front for the campaign beyond Firmino and Origi.

For the immediate future, at Tranmere on Thursday night, Klopp conceded some “very, very young” players would be included.