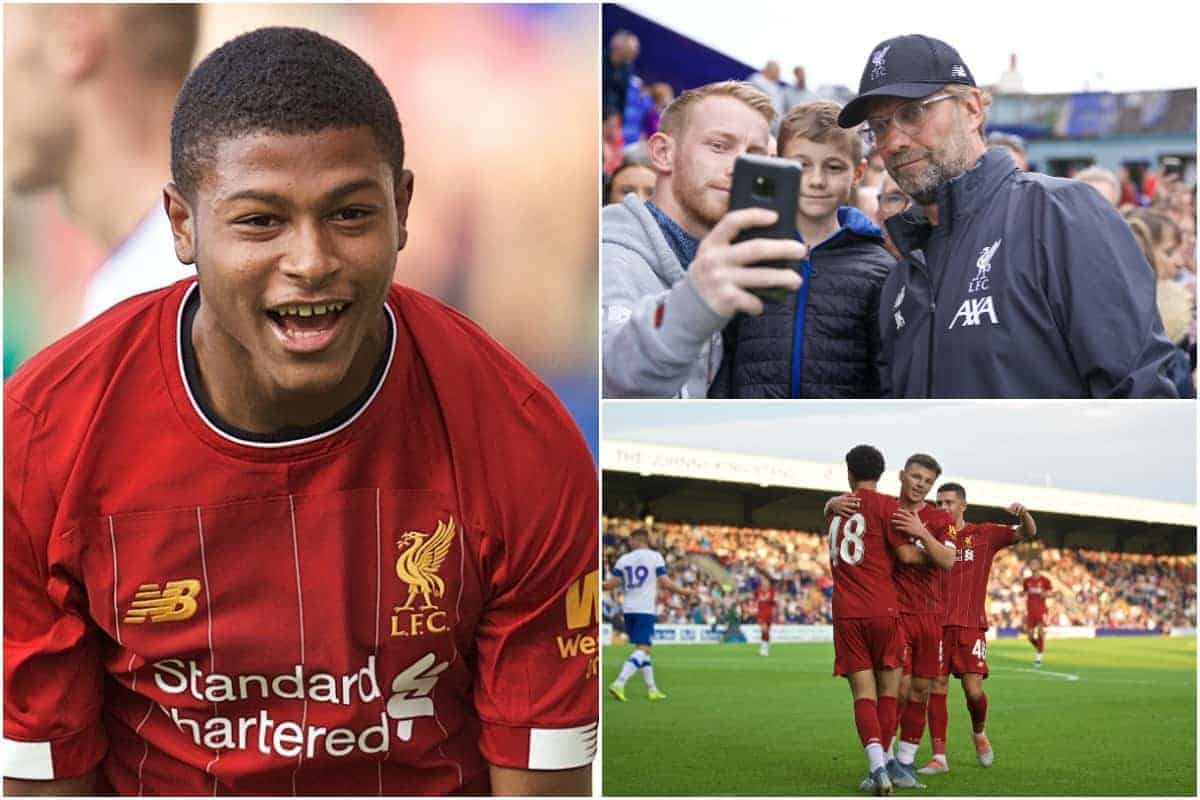 The media were full of praise for Rhian Brewster in the aftermath of Liverpool’s 6-0 victory over Tranmere Rovers in the first pre-season fixture of the summer.

The Reds kicked off their pre-season on a winning note after piling on six unanswered goals against Tranmere at Prenton Park on Thursday evening.

With a number of senior players still yet to return to training, Jurgen Klopp relied on a host of young players as he fielded a different starting XI in each half.

A brace from Brewster and strikes from Nathaniel Clyne, Curtis Jones, Divock Origi and Bobby Duncan ensured it was a convincing victory for Liverpool.

Here’s what the media had to say on the Reds’ first outing of the summer. 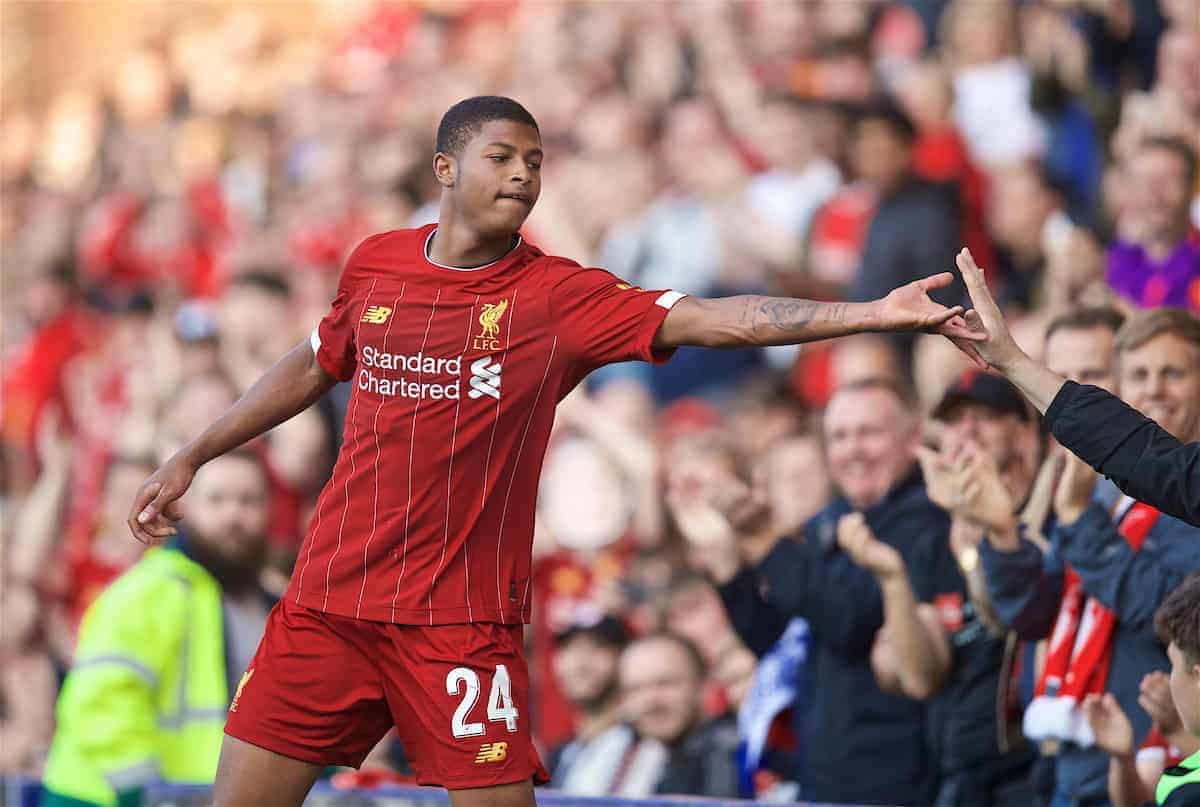 The Daily Mail‘s Dominic King hailed the 19-year-old’s ability to consistently show up at exactly the “right place” when needed, as all top goalscorers should:

The art of being a top goalscorer is being in the right place at the right time and he showed that in abundance.

Writing for the Guardian, Andy Hunter also noted the speed at which Brewster processes the game, both physically and mentally, and how the match could prove to be the start of his “breakthrough season”:

For Brewster Prenton Park represented the start of what Klopp hopes will prove a breakthrough season for him.

His quick feet are matched by a quick mind.

The praise for the young forward continued as the Telegraph‘s Chris Bascombe was the next to laud Brewster for his quick movement in a performance which “bodes well” for the near future:

Brewster demonstrated he is nimble of mind as much as feet.

Early days, of course, but the hype generated around Brewster has been as much internal as external and this introduction bodes well.

And for This Is Anfield‘s Henry Jackson, the game showcased how “special” Brewster is as he looks to make a case for a prominent role in the first team in 2019/20:

Brewster is special, and this was the ideal start to his pre-season, as he looks to show Klopp that he could be Firmino’s deputy in 2019/20. 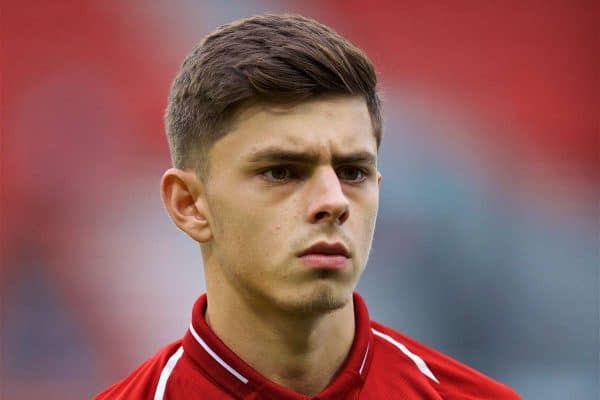 Amid the experimentation, it was eye-catching to see Adam Lallana reinvented as a No. 6, the midfielder another of those certain to improve Klopp’s options if he can stay fit.

Youngster Adam Lewis may also silence the demands for a back-up left back for Andy Robertson.

Conversely, the Liverpool Echo‘s Ian Doyle was of the view that Yasser Larouci, who featured in the first half, made a stronger case for the left-back position ahead of Lewis:

His attacking instincts were evident by a willingness to hug the touchline and press forward whenever possible.

Great energy, electric pace and a physique belying his tender years not only made him an instant hit with the Liverpool fans packed in the Bebington Kop, they ticked a lot of boxes a Klopp player would require.

ESPN‘s Melissa Reddy was similarly impressed by Larouci having singled him out as one of the standouts in the first term having capitalised on the first of many chances to “impress” this summer:

Aggressive, always available and displaying variety in his game, the star of the FA Youth Cup victory will get more opportunities to make an impression on Klopp during pre-season.

For Jackson, he thought 18-year-old Larouci was one of the standouts on the night after a performance “full of attacking verve,” which is sure to keep him in contention over the summer.

But, there was also praise for Lewis who he felt was more “assured on the ball” out of the duo:

It was Larouci who started proceedings at Prenton Park and he did his future chances no harm, albeit against noticeably inferior opposition.

His performance was full of attacking verve, combining blistering pace with directness and link-up play.

[Lewis] was arguably the more assured on the ball out of the young left-back pair, on a night when both shone.

Overall, the media felt it was an ideal start to pre-season for the Reds… 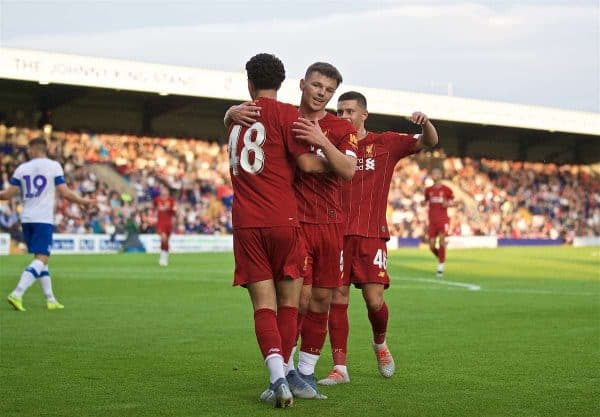 With six goals hitting the back of the net from five individual players, Bascombe felt the concern over a lack of goals in the absence of Mohamed Salah, Roberto Firmino and Sadio may be “premature”:

Henry thought there was a multitude of positives to emerge from the entertaining victory, but felt a sense of perspective needs to be retained after easing past the League One side:

This was the ideal way for Liverpool to begin pre-season, in what was one of the most one-sided friendlies in recent memory.

Despite many positives on the night, it would be reckless to go overboard about the result, or over-hype the impact of individuals.

There are bigger tests to come, not least on the upcoming tour of America, and Klopp will not get carried with what he saw.

Finally, the Mirror‘s Darren Wells rightly commended Liverpool’s young players for their performances in what proved to be a “promising start” to preparations for the 2019/20 campaign for Klopp’s men:

The young players all showed plenty of willing too, as they look to compete for first-team places.

All in all a promising start for the Reds.