Here’s how to watch Bradford vs. Liverpool on Sunday afternoon (3pm BST) as the Reds continue pre-season, live online and on TV around the world.

Following a productive 6-0 victory at Tranmere on Thursday night, Liverpool are back for their second warmup friendly at Valley Parade.

The tie is being held in support of the Darby Rimmer MND Foundation, founded by ex-Reds defender Stephen Darby following his diagnosis with Motor Neurone Disease back in September.

Darby represented both sides during his career, which was brought to an abrupt end last year, and proceeds from the Reds’ visit to Bradford will go towards raising awareness for MND.

On the pitch, Jurgen Klopp‘s focus will be on continued development for a young group who impressed in Birkenhead in midweek, with Rhian Brewster, Curtis Jones and Bobby Duncan among the scorers.

It will also be utilised to allow his senior players to regain their fluency after a summer break, while Dejan Lovren could make his first outing of pre-season ahead of the US tour.

Bradford vs. Liverpool is live on LFCTV, with coverage starting at 2.15pm (BST). LFCTV is available on channel 434 on Sky and channel 544 on Virgin Media.

Bradford vs. Liverpool is being broadcast live by B/R Live in US.

The match is also available to stream live on LFCTV Go. 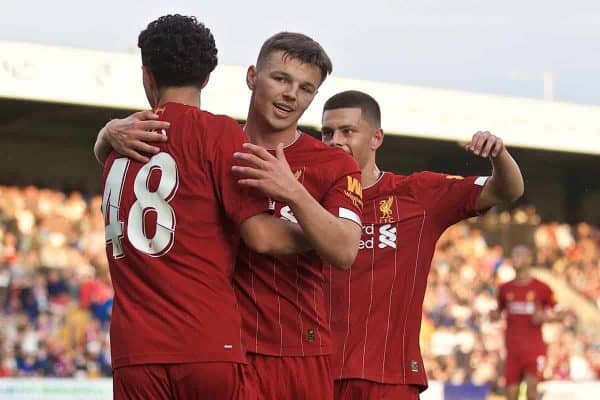 Supporters can find the Reds’ latest pre-season friendly on the following channels worldwide:

You can follow all the action tonight, during pre-season and throughout the 2019/20 campaign with us by downloading the This is Anfield app for iPhone and Android for free.